A New Threat For A New Era 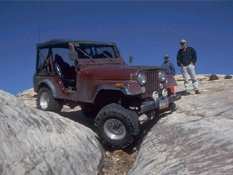 It's no surprise that the media likes scaring the unholy shit out of us; fear and terror sell newspapers. If there was some way for the press to bribe an asteroid into colliding with the Earth, they'd instantly ship bales of cash into space to exclusively cover the event. "ASTEROID ARMAGEDDON 2001 - ONGOING COVERAGE" would be splashed across headlines throughout America, with evening television news corespondents informing us that our children should add "getting blown up by an asteroid" to their list of things to constantly worry about, joining "drugs, school shootings, shark attacks, paint fumes, asbestos, robot zombies, and the Code Red computer virus." I can just imagine the news now...

ANCHORMAN: "In a late-breaking news item today, scientists have revealed that a humongous asteroid is scheduled to slam into the Earth and vaporize a good majority of us, the survivors being doomed to roam across a bleak wasteland of pain and destruction. Is your county one that will be consumed by the hellish inferno of doom? Will your electricity bill increase accordingly? Stay tuned for the answers to these questions and scheduled school closings after this ad for Tampax tampons." (Cuts to commercial)
WOMAN: "Whenever my vagina starts acting weird and I begin mysteriously urinating blue liquid, I always choose Tampax tampons to ram up my grotesque and swollen hole!"

The media feeds off prolonging misery and human suffering so they may capture viewers for as long as possible, pulling in fantastic ratings and advertising dollars throughout the ride. One of the biggest media scams that was run during the 1980's was the horrifying crack baby scare. Does everybody remember that lame fiasco? The news media spent day after day convincing us that the biggest threat to American society (besides Gary Hart and rap music) was the emergence of a deadly new demographic, the crack baby. Unlike the implied name, the crack baby wasn't in fact a baby that was addicted to crack, but the media found it difficult to get the phrase "baby of a mother who is addicted to crack" to really catch on. The term "crack baby" ended up winning the contest over such notable entries as:

"UGO employee" (the term is still true, however UGO didn't exist back in the 1980's and as a result, nobody knew what they were talking about) 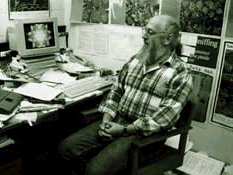 Once again, thank you Alta Vista.

As it turns out, nothing ever happened with these so-called crack babies. They didn't turn into a group of bloodthirsty serial killers bent on implementing their brutal reign of terror. They just grew up to be regular kids, albeit ones with much smaller heads and parents who spent all day scratching their eyes out with roofing nails. The media brewed up the entire crack baby line of bullshit simply to sell newspapers, ad spots, and raw fear to the American public. It worked up until the early 1990's when everybody forgot about crack babies and decided to get worried about school violence and Kurt Cobain. Despite a complete lack of scientific proof, the media was able to brainwash an entire culture for a good half decade. Now it's the year 2001 (I think) and it's time for a new threat to Americans all across America and surrounding non-American countries. Since I, like the media, lack any scientific backing whatsoever, let me be the first to announce the current upcoming enemy of our civilized society: The Counter-Strike baby.

The process of growing up and supposedly "maturing" in a Counter-Strike environment has been scientifically proven to damage children's brain cells and developmental qualities (NOTE: all links in this article go to an edited photo I made regarding the horrible movie "AI"). I believe the Counter-Strike baby poses a dire threat to our fundamental way of living and societal structure as a whole. These kids spend all day playing Counter-Strike, learning destructive habits while exposing themselves to a harmful environment which supports negative behavior. If participants of the game Counter-Strike are not medically treated at once, I believe our future society will suffer from the following downfalls:

1) The total disintegration of teamwork. Counter-Strike players are notorious for lacking the ability to follow simple instructions and adhere to a teamwork-based strategy, even when it is obviously required and critical to success. This will result in the following simulated events:

2) The complete destruction of the English language. The Counter-Strike culture is based on an incomprehensible ball of Internet shorthand, profanities, and one-liners. It's like somebody took English, threw it into a blender, and then tossed that blender into an even larger blender, one which then blew up and injured the surrounding engineering team. The restaurants of the future will be forced to feature illegible menus that cater to these Counter-Strike babies, adversely effecting the rest of us:

3) A society populated by individuals who are self-professed masters of knowledge in fields they have no practical experience. Counter-Strike players have been scientifically proven to spend 96% of their day posting forum messages stating their views on popular firearms, despite the fact that their knowledge of these weapons comes directly from what they've seen in Anime or read on their clan webpage. This will undoubtedly lead to a culture where individuals are encouraged to speak in-depth on subjects they know nothing about, leading to dangerous consequences.

MAN: "Doctor, I really need help. I've been vomiting brown jelly for the past three days and I think I found a key internal organ of mine floating around in the toilet this morning. What do you think is wrong with me?"
DOCTOR: "HAW HAW HAW YOU SUCK!!! TAKE SOME NUPRIN YOU FAG!!!"
MAN: "But Doctor, that's what you said when I came here last time. It didn't help at all!"
DOCTOR: "YOU WUSS!"
MAN: "Doctor, why are you talking to me in all capital letters?"
DOCTOR: (Outside office, staring straight down and running in circles)

So, as you can see, the Counter-Strike baby phenomenon is a dire threat to our way of life as we know it. I propose the media spend the next half-decade covering this chilling and terrifying gob of fake science so the American public will be made aware the effects of Counter-Strike on our children. After five years we can pretty much forget about the whole thing and continue worrying about stuff that really matters, like "Dungeons and Dragons" forcing teenagers to jump off buildings.