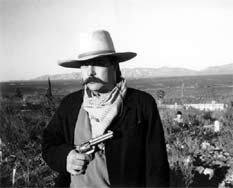 The guy up front is what we like to call a fake cowboy. Real cowboys never stand up front, you can see the real one in the back there crouching in some tumbleweeds.Are not featured in this article. They are the enemy of this article, the menace that plagues this article and drives it to the cliffs of despair. For years I have heard these four expounded as the eternal font from which all comedy springs, an inexhaustible supply of hilarity, a well to which the chuckle-bucket may be endlessly dipped. That such lies have gone uncontested until now is a sin against God and all else that might be considered holy up to and including Blueberry Morning cereal, which is undeniably the best cereal ever and if you dare to dispute this than all rights you might otherwise have to continue living will be forfeit. I am here to contest the supposed dominance of these unscrupulous scoundrels, to pull them down from their ivory tower, to finish this article as quickly as possible so that I might sit down in a corner and eat an entire box of Blueberry Morning cereal out of a mixing bowl.

Fuck, all I have is heavy cream, no milk. Oh well, when in Rome, use heavy cream on an entire box of cereal in a mixing bowl. But I'll deal with that later, when Blueberry Morning and I can have a little time alone together thank you very much.

Let me repeat that.

Why are cowboys left out of this quadfecta or whatever of supposed comedic icons? The answer is the answer to every question ever posed; ignorance, malice, and possible communist anti-cowboy sentiment. It is a vast conspiracy to keep cowboys out of mainstream comedy, a conspiracy that I am about to crush into a little ball and launch into the sun with my world-rocking report on the untapped comedy potential of cowboys.

Cowboy Comedy: A Report In Potential 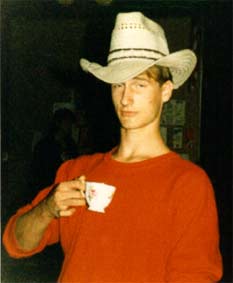 You might think cowboys got no class, but they drink tea just like anyone else; one leg at a time.Ladies and Gentlemen, I have put together this dissertation on the incorporation of cowboys into mainstream American humor in an effort to both recognize the long and powerful legacy of cowboy culture in American history and at the same time reflect their potential as a continuing icon of our proud humorist tradition. Cowboys have a past, a present, and they deserve a future in the hearts and minds of readers across the world.

The cowboy was not always a symbol of comedy. In the 1500's the cowboys tamed the so-called "Wild West". With their lariat skills and gun fighting ability they managed to destroy the culture of the indigenous Aztec tribes scattered throughout the Great Plains. They were as ruthlessly efficient as they were lawless, and once the Aztec menace had been purged from these United States the cowboys turned their unchecked aggressions on the innocent townsfolk of such historic locales as Laredo, Houston, Tombstone, Chicago, Philadelphia, Tenochtitlan, Paris, and Jellystone National Park. The cowboy's reputation quickly turned from that of a freedom fighter to that of a rogue and outlaw. When people heard someone say "cowboy" they shuttered their windows and hid in the cellars as if someone had just said that a tornado was headed towards the town.

In a way they were right! Whenever cowboys came through a town they left in their wake a path of destruction and bloodshed exceeded only by the war parties of the Aztecs they had helped to subjugate. This is not say that all cowboys were necessarily cut from the same cloth of evil, others were cut from the much softer and gentler cloth of good, and these cowboys became mayors, sheriffs, or philanthropist. One cowboy by the name of Pete "Bone Spur" Wyatt donated 75 Aztec pelts to the Laredo furrier during a dry spell that left the traps of Aztec poachers empty. Other cowboys turned to comedy as a source of work, and one particularly successful cowboy comedian was Johnny "Sickle Cell" O'Reilly.

Old Sickle Cell toured the hotels and motels of the Adirondacks region in the late 1500's performing a mixture of vaudevillian Negro-based humor and off-color ventriloquism. Through some effort I have acquired a wax cylinder recording of one of old Sickle Cell's routines, a little bit he referred to as "The Negro is Almost as Lazy and Stupid as the Mexican." This recording was made in 1598 at the Paradise Palisades Hotel and due to technological constraints of the wax cylinder format I was unable to re-record it in digital audio so I have produced a transcript of select portions of his routine.

Old Sickle Cell: When I was out West round about Pascadero I shot me ten Aztecs and you know what that got me to thinking?

Old Sickle Cell: That the only thing more lazy and worthless than an Aztec is a Negro.

Old Sickle Cell: Mexicans? Almost as lazy and worthless as a Negro! Why, they are so lazy and worthless that I one time shot me a Mexican and he fell on a pile of dead Negroes and his family just sat there eatin' their cotton-pickin' toe-jam.

Old Sickle Cell: Who's there?

Sickle Cell was not the first cowboy/comic crossover, nor was he the last. The legacy of hilarious cowboys continued well into the late 80's with the work of cowboy stand-up "Hop Along Hilarity". This long lineage of cowboy comedians came to a tragic end in 1992 when "Hop Along Hilarity" was killed during a stunt filming the pilot episode of "Hop Along Hilarity and the Hijinx the Clown Hour". Since the day the laughter died, cowboys have been relegated to the smoke filled meetings of comedy writers and the frigid basement apartments of web humorists. 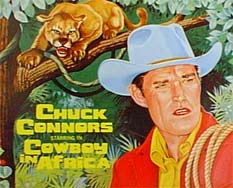 A cowboy in Africa is a perfect example of the cowboy out of water formula.Cowboys In Space - One of the most popular uses for cowboys is to insert them into an unlikely space exploration or conquest scenario in which the cowboys are fighting aliens or robots for domination of an interstellar battlefield. This concept allows creative screen writers to put a humorous slant on the cowboy theme giving them lasers instead of six-shooters, electro-lariats instead of regular lariats, and possibly even space horses of some kind.

An Island Populated Only By Cowboys - This is a spin on the popular "zombie island" concept in which the only inhabitants of a deserted tropical island are the walking dead who hunger for the flesh of the living. In this wacky caper the cowboys would inhabit a tropical island and prey upon some stranded travelers who have survived an otherwise deadly shipwreck.

Cowboy Caught in a Love Triangle - Cowboys sometimes have problems controlling their sexual urges and in this comedic triangle the Cowboy is in love with both a school marm and a hooker with a heart of gold. It's both original and funny!

It is my belief that cowboys deserve a place at the table set for comedic greats, and I hope that with a little help from me they will arrive at that table to find their bread fully buttered. Speaking of eating, I'm looking at my watch and I think it is a quarter past time to eat that bowl of Blueberry Morning cereal. This bowl is for all of you cowboys out there. To the rest of you, thank you and good day.