Thank You Very Much, Internet!!!

Since my cable modem service is apparently maintained by two retarded crippled children who spend hours distracted by a bright, red, floating balloon in their office, I had the opportunity of not using the Internet for a large portion of the previous night. This turned out to be an intensely positive experience, as it allowed me to sit back and count the number of ways the Internet has corrupted me and exposed me to a world of stupidity and filth that I previously never knew existed. Any quasi-regular reader of this site undoubtedly knows that the Internet inherently makes you stupid; it brings together communities of stupid people who proceed to amplify their stupid exposure on the Internet by as much as possible. Now this in its essential form isn't a bad thing; the Internet is simply a tool like a hammer or urine sample container. However, the Internet has the unfortunate side effect of bringing out the most repulsive, abnormal, freaky groups of people to exist since the psychos who attended the Jim Jones refreshment line. Take a step back in time and recall the days before you were exposed to the Internet, the days when you were innocent and had not been exposed to: 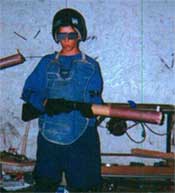 People who are sexually aroused by pictures of women inflating balloons. As far as fetishes go, this one is fairly clean because there's only so many ridiculously stupid things you can do with balloons. Besides, balloons don't blow up into any funny shapes, unless you consider "round" to be funny.

Goths. Now we all knew that goths existed; I mean you can't walk 20 feet inside a mall without bumping into some black shirt-clad, white pancake-faced, skinny, awkward teenager who chooses to express their suburban rage by dying their hair blue and putting a Limp Bizkit sticker on the back of their grey Ford Taurus their parents bought them for turning 16. Thanks to the miracles of the Internet, these social retards are now granted the power to gather in large groups and express their rage via shitty poetry, embarrassing artwork, and webpages seemingly designed for the sole intent of causing the reader to laugh themselves to death, thereby damning their souls and sacrificing them to their dark lord, Geocities. 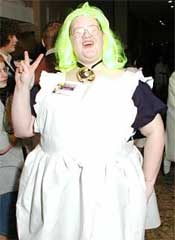 Psychotic nutbags who are turned on by humanoid-shaped foxes engaging in sexual intercourse with humanoid-shaped rodents or beetles or other animals. Not to rag on any of you people who were attracted to Gadget from "Rescue Rangers," but I've got serious issues with people who enjoy pretending they're an animal so they can have sex with another animal. They apparently have serious issues as well, as there are a whole bunch of furry fetish spinoffs, such as giant furries having sex while crushing buildings, actually physically engaging in sexual intercourse with stuffed animals, and various other horrible unspeakable things which I cannot even begin to explain.

Women stomping on bugs fetish. Do I have to say any more? Jesus Lord I sure hope not, because I don't think there's anything else I could possibly write. Okay, I'm getting really sick of looking up all these horrid links, so I'm going to stop right now. Oh wait, there's also whatever this is. And this too.

Retarded kids who watch Japanese cartoons and then attempt to dress up as the fictional cartoon characters. This procedure is successful about 0% of the time thanks to the fact that Japanese cartoons feature people who have eyes the size of water coolers and a waistline measured in millimeters. Add into this equation the target audience of Anime, overweight, acne-ridden, pale-skinned white kids, and you've got yourself convention pictures worthy of international war crimes tribunal investigation.

Alien abduction victims that claim they've had devices implanted into their brain, but all existing proof points to the notion that the aliens, in fact, removed their brains entirely. There's like an Art Bell webring of a few thousand people whose total combined IQ is less than any randomly chosen number in their IP address. The government is naturally attempting to cover up their conclusive evidence by doing such nefarious things as not having any conclusive evidence but that does little to slow down their relentless pursuit of the truth, no matter how false it may be. Do you see those clouds above your house? They're UFOs in disguise! Can you see that black thing behind those trees six miles away? It's a UFO disguised as a barn! Are you able to see that glowing UFO floating around the night sky? There's a secret governmental conspiracy mind-control device hidden behind it! Everybody stock up on canned chili and head for the hills because the Saucer People are here to royally fuck our shit up! 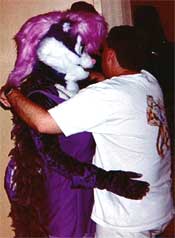 Scientologists. Sure you might have innocently run into these creatures at the local grocery store or palette factory warehouse, but they have the uncanny ability to temporarily disguise themselves as human beings, thereby fooling the general public into thinking they're not sinister freaks from another galaxy. The Internet, however, allows these crab-like creatures to lurch out into the public view, thereby promoting their insane agenda and "religious" teachings based off some ramblings a hack science fiction writer scrawled on a barroom napkin in between lap dances.

The many, many, many wonderful colors of the psychedelic PLUR-filled world of ravers. If the color scheme of flashing neon pink and green wasn't enough to make your soul explode, there's always the additional benefit of rEaD1nG a w3BsItE tHaTz wR1TTeN iN tH1s wAy. I'm currently trying to pass a bill that allows pest control specialists to fumigate ongoing raves with a couple hundred gallons of millipede spray.

Fan fiction. Okay, so maybe you like "Transformers." Perhaps you enjoy reading "Spiderman" comics. That's all fine and good by me, but for God's sake, why does anybody feel the need to write "erotic" fan fiction concerning characters on these shows? Every time somebody copies and pastes a story revolving around members of "The A-Team" engaging in oral sex with each other, a part of me dies. I think you all can safely infer which part of me that would be. It's like a drunken hobo is using a meat cleaver to remove the chunk of my brain that contains all fond memories of the 1980s.

The nonstop, rambling, incoherent prophesies of doom foretold by religious wackos who interpret "overcast skies with a 40% chance of rain" as meaning "REPENT FOR YOU WILL ALL PERISH WHEN GOD'S HOLY ASSAULT RIFLE BLASTS A FEW HUNDRED ROUNDS INTO YOUR RAVENOUS GUT!!!" Of course these guys don't actually come out and say that; they choose to spread their message over approximately 50,000 pages of text that highlight random words such as "JESUS," "SINNER," and "BARNYARD."

Internet cartoonists. You see, on the Internet everybody can pretend to be whatever they want to be; a writer, a designer, an artist... the only limit is their imagination. Unfortunately, everybody ends up being really shitty writers, really shitty designers, and really shitty artists. While traditional cartoons have at least some basis in humor (with the notable except of "Andy Capp," which was solely created to show the entire human race how all Irish or British or English people are drunken boring wife beaters), Internet cartoons take anti-humor to all new levels of pain. Most of these cartoons seem to have been inspired by the witty dialogue printed on the back of vitamin bottles, although the authors would have a hard time accurately drawing the advanced shape and design of the pills contained within. As far as I can tell, Internet cartoonists just copy chunks of text from their tax returns and superimpose them over speech bubbles coming from crude caveman etchings dating back to 50,000,000,000 BC. Coincidentally, that was the same year Jack T. Chick was born.

Personal ads cleverly disguised as absolutely non-clever homepages. If you're pathetic enough to post ridiculously unappealing photos of yourself in the futile attempt to find love with an AOL address, you probably deserve a fate worse than the electric chair. Like maybe they'll put you in the electric chair and then put the chair in the gas chamber and then launch the gas chamber into the sun which will then explode because of all the acne-zit-oil from your face. On a completely unrelated note, my Internet girlfriend is moving in with me at the end of this month, so please send all your wedding gifts to our upcoming Hotmail account.

These were just the first 15 things I could think of while using the bathroom a few hours ago, so it's safe to say that the Internet isn't exactly the shining beacon of hope that Al Gore had in mind when he invented the first router and electricity and the biplane and whatever else he did besides growing a beard that made him look like an escaped convict. Now before any of you people start writing your flame mails criticizing me for writing "the first 15 things" but only listing 12 items, let me explain to you one thing: nobody has ever read this far in any article I have ever written. In additional to destroying our will to live, the Internet has also lowered our attention span and patience. Thank you very much, Internet! 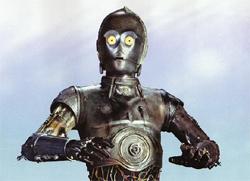 Yoda shows up to do battle with lightsabers. If this sounds crazy, it is! It reminded me of a backstage brawl I once witnessed on the set of "Sesame Street." But thankfully Anakin's dad has some terse words for Yoda and the situation is resolved and the scene ends before the entire film becomes a complete loss. Anakin's dad reminds me of the drunk skateboarder with spiked hair that hangs outside my apartment, so I won't say anything more about his character because I'm offended. Sam Jackson from Changing Lanes is also a Jedi Knight but he forgot his prime directive and wanders around for most of the movie trying to steal robes from bounty hunters or something. I really couldn't understand why he was in the film at all, to be honest. I guess George Lucas threw him in at the last minute to be the token "black guy."

Now you know the drill, ladies and gents: send this link to your rabid Star Wars fanatic friends, post it on Star Wars fanatic newsgroups and forums, and generally try to see how many people you can trick into thinking it's a real, legitimate review. The more flame mail we get, the better! Just do not, I repeat DO NOT, flood or harass people with the link. We want to keep this as realistic as possible and try to sucker as many zealot idiot fans as possible. The entire purpose of the Truth Media section is to expose the rampant idiocy of mindless fanboys who associate their entire persona with any silly consumer form of media. Get crackin' and spread the good word of Truth Media's review!