It wasn't long ago that I, like the hundreds of other people living in America, found myself without direction. When my alarm clock vomited beeping noises into my ears, I got up and sat motionless waiting for the day to pass. I dutifully repeated this process seven times a week with the grace and dashing swiftness of the Red Baron. That is, if the Red Baron was also a hopeless shut-in instead of an ace fighter pilot. While I can safely say that I was indeed experiencing what scientists, foreigners, and the Bible refer to as "The American Dream," I can also safely say that I was grossly unsatisfied and unfulfilled. Not to sound greedy, which is ironic since I'm insanely greedy, but life wasn't offering me enough. I wanted action, adventure, and the type of prestige usually only associated with certain highbrow brands of hotdogs. It was clear I was searching for an answer to the dreadful riddle of my existence.

That all changed when I discovered the answer to the dreadful riddle of my existence. Finally, I had the key that unlocked the exit that freed me from my perpetual rut! Through careful observation of the snobby elite, I discovered that you don't have to be healthy, wealthy, or wise to engage in the sort of action and adventure that equates your name with international prestige. You just have to have a goddamn crest. All the big kings and jerkoff aristocrats of the world had crests, and literally all of them ended up appearing in at least one history book. There is no law preventing common man from possessing a crest, and so it is with much delight that I exploit this loophole in our legal system and set myself high amongst the kings. Gather around my friends, for today I unveil my crest!

I invite you to follow along as I show you the evolution of my crest. Watch it grow from a simple desire to glorify myself into an elaborate tapestry of self-gratification. I show you the stages of my crest development not in hopes that you will follow suit, but in hopes that you will recognize me as your better. Let us begin this journey post haste!

Stage One: The Mascot
In my hours of research, I noted that almost every crest had some kind of mascot. In most cases, it was something stupid like a lion. If it wasn't a lion, it was a dragon, a griffin, or a knight. For reasons I don't quite understand, lions are always depicted walking upright, which everybody knows is physically impossible. Lions are quadrupeds, so they walk on four legs, not two. My crest was not going to be devalued by factual inaccuracy, so no damn bipedal circus lions for me. I wasn't interested in having a mythological beast like a dragon on my crest either. I also didn't own a suit of armor, so putting a knight in my crest would be an outright lie. Sure, there was that brief period in high school when I built myself a Godly Plate of the Whale, but my version carried no magical attributes and was mostly made out of cereal boxes, some of which still contained cereal. With all that being said, there was only one choice. I decided on a pterodactyl, a dinosaur with a distinct advantage over most dinosaurs: the ability to fly like an eagle. My crest was off to a good start.

The first step on this awesome journey. A mascot is chosen to represent greatness.

Stage Two: The Shield
Another key component to a good crest is to include a shield. I don't carry a shield, and I'm doubtful anybody in my family linage carried a shield either. However, tradition is tradition, so I'm including two shields. I like to give as much as I can, and this is my way of doing just that. Furthermore, each shield carries a different facet of my personality. In this case, a can of soup and a television set. Both soup and television piss me off, so that's why they're on my shields. Only my worst enemies will see that side of the shield, so all is well in my world.

Stage Two refined the crest by adding shields, a common defensive weapon used by cowards afraid to be hit.

Stage Three: Clutch This!
This would be a pretty pathetic crest if the pterodactyl didn't have something wicked in his hands. I originally thought it would be awesome to have the pterodactyl carrying a lightsaber, because man would that be sweet! But then I felt that the lightsaber was becoming cliché, and clichés are something I want to avoid like the plague! It was evident I would have to innovate so that my pterodactyl clawed something worthy. The solution came when I realized that the only thing cooler than a lightsaber would be a gun that shoots lightsabers. What better way to defend yourself than with a lightsaber shooting gun? Of course that just represents the means. I still had to show what holding a lightsaber gun leads to. Logically, I decided to put some links of sausage in the pterodactyl's other hand, to represent the ends. By holding a weapon in one hand and food in the other, the pterodactyl demonstrates resourcefulness in acquiring food through intelligent methods. Now that's something a sassy lass like myself can take pride in!

Now equipped with the tools of survival, Stage Three helped give the pterodactyl a sense of purpose.

Stage Four: Personality
Having a pterodactyl clutching sausages and firearms says a lot about what kind of man I am, but it doesn't say everything. To tell the real story of my life, the pterodactyl would need a personality. He would need to be a scurvy seadog, a champion of the savage ocean blue! I equipped him with an eye patch, a ragged and weathered shirt, a pirate hat, and a hook hand. Unfortunatley, the hook hand caused some major problems. I felt it would be historically inaccurate for a lightsaber gun, presumably created a long time ago in a far away galaxy, to be placed in the hook hand of a pirate. Pirates are characters from Greek mythology and lightsaber guns are distant science fiction past. I simply had to remove the gun to preserve the integrity of the crest.

Stage Five: Split Personality
In retrospect, I realized that stage four was a mistake. I exhibit none of the traits commonly attached to pirates, so therefore this crest would be a farce. I decided it would be for the better to change the pterodactyl's personality completely. This dinosaur would need some super characteristics to back him up. He would need to be a superhero, capable of great feats of strength and speed. Giving him a cape would simply not get the job done. People need to know that this pterodactyl is directly connected with the vary people he protects. To solve this dilemma, I gave him glasses and a tie, indicating that he also masquerades as a regular member of society, working and relaxing just as the rest of the world does. This turned out to be a good move, because our old friend Mr. Lightsaber Gun was able to return to action. If you're wondering why he also gained some underwear, it's because most superheroes wear underwear on the outside of their costume. It would be pretty silly for a pterodactyl to wear pants, so instead I just had him meet the norm halfway.

The Stage Five crest captured our imagintion with heroic deeds and challenged us to dream without limits.

Stage Six: Personality Finalization
At this stage in the development, I realized that I am too multi-faceted to simply be represented by a superhero pterodactyl. I went back to the pirate personality and decided that it had a place in my crest. I like to think of myself as groundbreaking, especially when I'm smashing floors, so it really wouldn't be that ridiculous for me to combine a superhero personality with a pirate personality. Both lifestyles ended up complimenting each other in surprising ways. For example, because the secret identity of the superhero wears glasses, the eye patch becomes unnecessary! Furthermore, the tie and cape add a real dynamic to the otherwise drab pirate uniform. Finally, my mascot was perfected!

Stage Seven: Crest Completion
With all the pieces in place, I was ready to wrap everything up nice and neat. The last few touches included adding trophies, which symbolize my status as one of life's winners, and an empowering banner. Most crest mottos consist of an inspiring phrase written in Latin. I took Latin in high school, and I failed it in such a manner that if failure was a good thing, I would be the first robot president. Besides that, Latin is a dead language! I'm not a goddamn necromancer, so why the hell would I want a dead language on my crest? I decided on the subtle but straightforward slogan of "I Win, Ass!" which helps solidify my residency in Winnersville, USA. It also states that I think of you as no less than an ass. The absolute last and final touch was to add a bunch of gay lines and circles to the background, which I think symbolize that while I'm mostly dynamic and sophisticated, I'm also capable of tenderness and fancifulness. 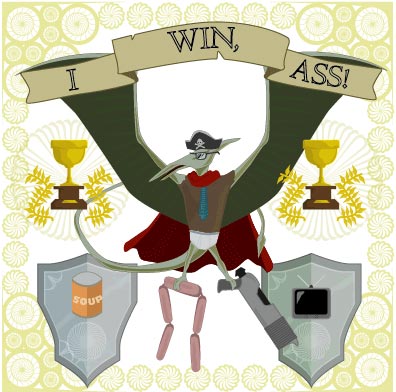 The final completed version of my crest certainly ranks up there with the finest artworks ever created by man.

Now that my crest has been completed, I feel as if though I have something to strive for. Excellence has been rendered in my name, and I therefore must use each day to render my name in excellence. It's quite obvious that the majority of people don't have a crest, which accredits me with vast amounts of superiority and ego. You know what that means: I win, ass!

The Mysterious Goldmine of Mystery

Because of daylight savings time, the Comedy Goldmine ended up a day late. But it's here now, so enjoy it! The Goons decided to play sleuths and investigate the theme of mystery novels. 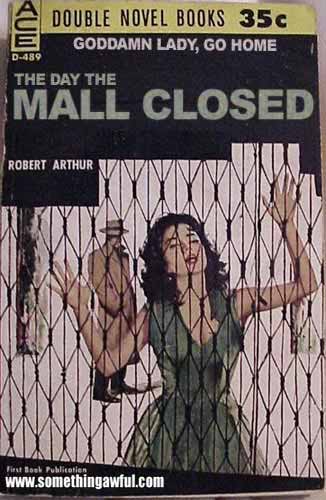 Go ahead and crack this caper. I'm Watson your back, Holmes!