As the graph clearly illustrates "things" are "happening" with "stocks".Readers of such far-flung publications as "this web site" and also "this web site yesterday" were made aware of the shocking news that America is "Let's Roll©"in' our way into Iraq in the near future. While support is still fairly strong for attacking the rogue state of Iraq a lot of people have realized that since their unemployment payments are about to expire they won't be able to pay Rent-A-Center for their HDTV and will totally miss out on the cool bomb cam footage CNN will be showing. Justifiably outraged at not being able to see our robot planes shoot lasers at buildings in Baghdad, support is growing for the "wait until we can pay our cable bill and then attack Iraq" movement. The president, who may or may not be George W. Bush backed by the New World Order, the Illuminati, the Thule Society, or the Zionist Global Government, is very aware of the domestic problems in this country. Hell, he has had an opportunity to experience it first hand as several businesses run by his good friends have gone under due to accounting errors.

Bush, or at least the Illuminati, is not stupid. Wrapped in with his package to make Iraq explode was a groundbreaking economic stimulus package. Even shrewd political analysts like my barber and the woman who yells in the street in Spanish have caught a serious war fever and probably missed out on the details of this package thanks to the 105 degree temperature of fun they were running. Leave it to Something Awful, the bastion of truth in a sea of lies, to bring you the facts on this secretive deal to save our nation from economic ruin while our brave soldiers march into Iraq to plant dynamite under things that aren't still blown up from the last time we attacked them. Actually they'll have a tougher time than you might think since apparently Iraq's army consists of bad guys from every Nintendo side scroller ever made. The US armed forces just walked off the screen and immediately ten troopers and the big guy with the bazooka respawned on the Iraq screen.

Bless the Jesus on high for a president with the foresight to take care of the troubles on the home front before extending our national resources into the war against terror. While I will sleep much safer in my bed at night knowing that Saddam Hussein won't be able to break down my door and rape my pets I'm just glad that I'll have a bed to sleep in at all. This thanks to George W. Bush's three phase economic stimulus package!

Phase One - Halt the Rise in Unemployment 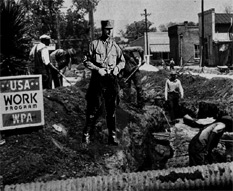 Finally back on the job with a little helping hand from the federal government!To prevent the continuing erosion of the economy Bush plans to take an aggressive stance to reduce unemployment and at the same time cost-effectively tackle major public works projects. Entitled The Freedom of American Strength, the plan is similar to Roosevelt's New Deal but is definitely influenced by the technique used by pirates and underhanded sea captains to secure needed crew members for a voyage. When someone files for unemployment they will be given the address of an "advisory office" where they can meet with an employment assistance worker. When they arrive at the office of the employment assistance worker they will be quickly corralled into the back and told to sit down. When thirty or so people have been grouped in the back room they will be loaded onto a truck and driven off to work on one of a number of massive public works projects. There they will toil and live, on site, until they can find another job. If they leave the area of the worksite they will be shot with that sticky foam and returned to their jobs.

The really amazing aspect of this program is that it promises to benefit in the economy far more than building something like a hydroelectric dam or an interstate highway might. The workers will be building offices for those Americans who currently have jobs, the facilities donated by the government to the corporate sector to use as they see fit. Not only that, but American laborers will be carving stone from quarries, mining coal, copper, and uranium, and assembling fighter aircraft for the war effort in workshops built inside of mountains to protect the delicate aircraft from terrorist attack.

Naturally all current welfare recipients will be rounded up and sent to these employment camps along with their children of working age (12 and up). Younger children, the elderly, and the infirm will be sent to "recovery camps" located on the surface of the sun.

Corporations are subjected to some of the most unfair restrictions on free commerce you can imagine. You thought taxes were bad, think about suddenly having to install twenty Boron scrubbers on your factories smoke stacks because some pocket-lining fat cat in Washington decided to pass a law. From bans on pumping boiling effluent into rivers to idiotic restrictions on using dynamite in the Tennessee mountains, corporations suffer day in and day out at the hands of bureaucracy. It's not just the environment that corporations have to baby along either, it's the fucking handicapped, with their wheelchair ramps and elevators. Like it's the department store's fault that you were born with Muscular Dystrophy? If you were taking care of yourself you would have the lower half of your body replaced with a Daewoo Mark 19 eight-legged walker chassis.

Sometimes in an effort to please the ravenous throngs of mob-mentality stockholders at corporations the CEO or board of directors is forced to make some accounting adjustments. These are upstanding companies just trying to get by, and they would if they weren't crippled by nuisance laws and an open marketplace.

With a little help from phase two of the economic stimulus package corporations that seemed on their last legs should be up and running in no time. All they have to do is demonstrate a willingness to streamline procedures that can include any of the following:

Force employees to sleep at the facility where they work and hot swap beds with other employees.

Cut all wages for employees below the second tier of the corporate ladder.

Employ children for jobs that require delicate hands. Children are very good with technology and can be excellent at manufacturing microprocessors, circuitry, and promotional giveaway football telephones from Sports Illustrated.

Shred everything relating to your accounting including your accountants, their families, their homes, and whatever immigrant minority takes care of their lawn.

Include copy protection in everything to prevent piracy. CDs should be unreadable by CD-ROM drives, DVDs should not be able to be scanned by a scanner/copier/fax, ghosts and vampires should not show up on film, automobiles should explode if the front hood is opened, and children's toys should transform into venomous snakes if they are "played with wrong".

To further alleviate the woes of corporate America Bush is planning on taking all of the Federal money currently allocated to Social Security, environmental protection, and welfare and parcel it out to companies in need. This should allow CEOs who were recently forced to downgrade from 100 to 25 room houses to return to their former glory. 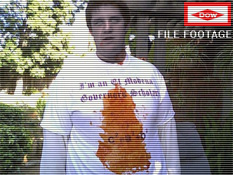 This stolen file footage clearly shows one of Dow's test subjects. Unfortunately they still have a long way to go as all this zombie likes is rolling dice and drinking Mountain Dew Code Red. He's also really bad at eating Taco Bell's Burrito Supreme.You thought the war on terror would stop with Afghanistan. Now you think it might stop with Iraq, but there are over fifty rogue and "sort of rogue" states on the Pentagon's list of targets. This should occupy our armed forces and your attention for the next 20 years or so. Bush is pragmatic though, he is looking ahead to 20+ years from now when all of the terror in the world has been eliminated by precision guided munitions. When that time comes we have phase three of the economic stimulus plan, a phase that specifically involves America's chemical weapons and nuclear power industries.

Dow Corning, in conjunction with the Tennessee Valley Authority, is developing a radioactive mutagen that will cause the dead to rise from the grave and tirelessly pursue the flesh of the living. Those who are bitten by the walking dead will become one of them, they will get up and kill. This new plague of cannibalistic zombies might seem counterproductive to the economy, but it allows us to stay on a war-footing and continue our completely noble crusade against international terror. After all, what could be more terrifying than a zombie? Well, other than going to war with our nation on the brink of economic collapse, but we don't have to worry about that now!

I wish I were just joking around about how shitty Bush's economic stimulus package is but there isn't even one to make fun of. I'm scared to death by all of the goddamn job losing and downsizing I've been seeing for two years now, and it's only gotten much worse as of late. I'm scared to death by the president breaking a strike for a corporation, as damaging and silly as the strike was. I'm scared to death that I might wake up one day and not be able to control my bowel movements.

Always raising the bar on interactive entertainment, Jeff K has assembled a great selection of addictive Internet games for you folks to play. From a maze to a word search these custom games are guaranteed to please the whole family and possibly even friends! 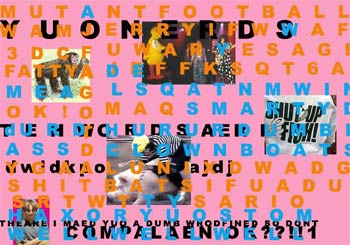 If you're looking to expand your mind with knowledge and have a good time while you do it, then you can't do better than JEFF K."S INTARNET FUNHORSE!!!