Criterion Collection: Our Time Continuum is Being Compromised!

Hi, I'm Zack Parsons, the author of this article. We're just getting to the part where I have the first picture and an introductory paragraph or two that ties the subject into a broader topic. We call this technique "writing" and it helps you to forget that in the end all of our articles are just humorous lists with some reused captions beneath pictures that are only vaguely related to the article. Speaking of pictures, all of the pictures in this particular update were culled from this weird Department of Energy subsite I stumbled upon like four or five years ago. It was some radiation experiment conducted on children and all of the pictures were extremely disturbing. I think the experiments they did were probably inhumane because they kept them secret until the Freedom of Information Act forced their hand, then they buried them on their website. The one right here with the nurse is particularly bizarre. It looks like she's pushing a gurney with meat arranged on it in the vague shape of a person. Hopefully it was just meat and not the result of an experiment. Delicious meat experiments. 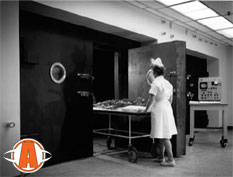 Another satisfied owner of the Timeraper.Time travel, once a thing reserved for killer robots, time cops, and faggy British Z-grade sci-fi, has become a terrifying reality thanks to TiVo's recent patent of mind-bending "time warping technology." Other companies were in a race with TiVo to develop and patent this technology, securing their future with the ability to travel into the past and eliminate the competition. Ostensibly used to "pause" live television broadcasts, the TiVo device represents a serious threat to the stability of our fragile space time continuum; they are playing God with a technology they do not fully understand! This and future products based on the "TiVo time distortion engine" will undoubtedly cause a rip in the fabric of reality, spilling forth the untold horrors of beyond onto our unsuspecting planet.

Oh yeah, I remember this article now, it was back when TiVo was just starting to get some buzz. You know TiVo seems like a pretty neat idea but I have to admit here, I still have not met anyone in person who owns one and I don't think I've even seen them hooked up at a store. I just imagine this big black box that sits on top of the TV and is full of secrets and magic, which I guess is sort of the point of this article. Yet another rambling essay from me that does nothing but showcase my inability to understand the workings of the world around me.

Arlogeist GmbH, always quick to steal someone else's idea and make it even more dangerous and scary, has recently acquired the technical schematics for the TiVo box. We've been busy adding features to it over the past weeks in an effort to bring you, the valued customer, more control over your viewing options and the course of history. Here and now, unveiled for the first time, is the The Arlogeist Timeraper!

Fun fact time! The company name "Arlogeist" was coined by Lowtax and I just slapped a "GmbH" on the end there because I think that's a hilariously German way of saying "Inc." The "Arlo" portion of "Arlogeist" comes from the now rarely seen nickname "R-Lo" I gave to Lowtax for a while. It was unbelievably fucking retarded and infuriated him whenever I used it in an article, which of course prompted me to use it even more. Eventually he stopped caring or feigned apathy and like a small child I stopped using it because it stopped making him mad.

That's great right there. This was back before I really had any set pattern on how I use bullet points so I just sort of stuck them everywhere they could possibly go; sort of like how I use commas and semicolons, to this, day. Yes, this massive one item list needed a bullet point, especially a black-outlined blue bullet point so as to confuse readers and make them think I had switched topics completely.

I'd like to pretend that I've come a long way since then.

HAHAHAHA GET IT?! It's a product for watching TV and it costs half a billion dollars! Man I wish I could still come up with comedy THAT CUTTING EDGE. At least I have the "type in caps" shtick still in my bag of tricks.

Power Usage: Roughly equivalent to a city of 50,000 people

Second verse, same as the first!

Size: Will fit in the local high school's small gym.

If I hadn't written this myself it would be this point where I would pretend not to know the person responsible and surreptitiously leave the room.

General Description: The Timeraper will take you on a wild ride through entertainment like you have never experienced before! Imagine watching the "Honeymooners," only with Ralph Kramden played by John Goodman and his wife Alice played by a Tyrannosaurus! You can do it with the mere push of a button. Envision comedy hit "Wings," only Joe Hackett is a basketball player from the Ukraine and his brother is a retarded gay pornstar! Just flip a lever and this can be reality! Have you ever daydreamed about a Stanley Cup game in which midgets play against Nazi stormtroopers? With the simple changing of the noble gas flood-tubes, your daydream can become a living nightmare.

Everything was "gay" or "retarded" back then. Since those wild times of 2001 I think all of the authors here have really matured to using terms like "homosexual" and "fucking retarded". On the other hand, that Stanley Cup game with the Nazis and the midgets would be must see TV. I know it would take something like that to convince me to sit through an entire televised hockey game.

Speaking of sitting through an entire sporting event, absolutely nothing short of the threat of death could get me to sit through a basketball game. It's not a racial thing. It's just that black people wearing shorts scare me.

Keep in mind that this article was written before 9-11 and all of the awful government programs it has spawned. Even reprinting this part for the Criterion Edition of the article puts me in serious danger of getting added to some sort of Orwellian watch list. I'd make a joke about how much I hate John Ashcroft here but R-Lo warned me that three more mentions of his name in articles and he's going to smash all my fingers with a claw hammer.

Welcome to the best joke of the article. Unbelievably, it's downhill from there.

Speaking of jokes, where's the joke on this bulleted item? It's so fucking unfunny that I just paused from reading this article, noticed a tumor on my arm, and burst out laughing at the comparative mirth contained within its malignant core. I can only imagine how immuno-suppressingly hilarious the chemo is going to be. Oops, I accidentally co-opted my own flooringly witty cancer-riffing.

This one isn't even worth mocking. It's about as funny as flipping through a scrapbook full of pictures of dead pets. I suppose I deserve credit for tying. There is the ominous and vague outline of a joke in there looking like the dark shape of a shark moving beneath your canoe.

If you came looking for a strong finish to this article, sorry to disappoint folks. This gag is what we in the business like to call the "seed". Alright, I'm not in any definable business unless writing erotic fan fiction for "War of the Worlds: The Resurrection" has recently been declared a trade skill, but I'll call it the "seed". It's the sort of very slightly clever idea that strikes me and inspires me into writing an article. The problem is that nine times out of ten my inability to maintain focus causes me to go off in a completely different direction. Then, upon remembering this starting point, I lamely tack it on to the end of an article that is already way too ruined by my rambling ass to be pulled out of the fire by a joke "The Simpsons" could tell in two seconds with a lot more comedy.

At least this time out the "seed" was the annoying format that you have endured up to this point, leaving me little choice in sticking to my guns.

Not to make excuses for myself, but my background in humor before joining the SA staff was almost totally limited to news parodies. Adjusting to the format of Something Awful takes time, and some day I will eventually learn how to fit in.

Fresh from the Photoshop

Livestock here, interrupting the thrilling Zack on Zack action. In stereotypical fashion, I bring you another fine edition of Photoshop Phriday. This week the name of the game is "movie posters." Not very exciting sounding is it? While it is a rather Spartan theme, it's always good for a laugh. This week is no exception, as the Something Awful Forum Goons whipped up a mighty bushel load of fine images not unlike this fine image: Please have the common courtesy to look at this new Phriday, and perhaps even touch the images you like.