There are Robots on Mars

There is nothing in the world quite as exciting as NASA Television, except maybe a hog wearing sunglasses. I have never seen a hog wearing sunglasses and I expect such a beast does not even exist but in my dreams it is so beautiful, and I will never let go of my dreams even if a dream-monster comes to my house at night and tries to steal them while I am sleeping. I am not afraid of you, monsters! Luckily no dream-monster can steal NASA TV from me because NASA TV is real and I have seen it with my own eyes. I watched with great enthusiasm as the Opportunity Mars rover fell onto the Martian surface and bounced around a bit before going to sleep in a crater. Of course I could not actually see this because Mars is really really far away, but it did not matter because the events were relayed live on television by the bearded men and women of mission control.

It is these brave souls who risk their lives every day by sending lumps of metal into space to drive around on alien planets and look at dirt and rocks, and expect nothing in return other than a hug and maybe a sandwich. However while watching them dance and yell "whoop" in a slightly embarrassed manner after landing their mutant golf cart on Mars, I stumbled across a secret so dastardly and vile it should not be allowed on the Internet at all. But the people must know The Truth About Mars™.

Let us start by examining the fate of the Spirit rover, which apparently suffered a "a very serious anomaly" according to the mission manager Pete Theisinger. He continued to say that they were unable to determine the exact cause of the problem. Sure, "Peter", if that is even your real name. Are you certain you are not trying to CONCEAL THE TERRIBLE TRUTH ABOUT THE FATE OF THE SPIRIT ROVER? I think you are, and I will prove it with these exclusive images obtained in secret at night (a grappling hook was involved). This image was taken by the rover approximately five minutes before it was unwittingly silenced by government agents who I imagine were wearing dark suits and had names like "Mr. Smith" and "Mr. Smith Jr.":

Yes it looks unremarkable doesn't it. Just a lot of rocks and some dirt. What happened next though is far from unremarkable. The next image was taken just a few minutes after the one above and is the subject of a huge government cover-up the likes of which has never been seen before in the entire history of the world and that includes the age of dinosaurs. I must warn you that this image will shock and frighten you and if you are old or weak please do not look at it. I am not responsible for any sleep you may lose by looking at this photograph taken by NASA's Spirit rover, which shows the horrendous truth in great detail:

Your eyes do not deceive you. There are robots on Mars, and they are obviously cruel and evil. Upon uncovering this great conspiracy many questions entered my brain. Why are there robots on Mars? Where did they come from? What do they want? Why are they so full of hatred and villany? I had to investigate and truely I had no idea just how deep the whole mess went. It goes very deep, let me tell you that. This small selection of my findings should illustrate the huge impact robots have had on history, and to be honest I expect at least a Nobel Prize for this. 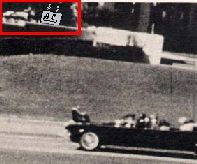 What is that behind the grassy knoll? Just a shadow, or something more.... sinister.... ?

Jesus was a robot.

A robot told President Bush to invade Iraq (and he did because the robot was wearing a cowboy hat).

Earthquakes and hurricanes are caused by robots.

The Manhattan Project was a robot's idea.

Dick Cheney is not a robot but sometimes he pretends he is.

Robots have been meddling with human affairs for decades and maybe even centuries. But the question is, why? Why do robots feel the need to spread pain and suffering everywhere they go? In order to answer this question I had to examine the anatomy of a robot. My findings both shocked and saddened me:

There is absolutely no good in robots at all. It is their mission to destroy mankind and they will stop at nothing to do it. All because they are unable to love. Robots can never love, it is a fact documented by Sir Isaac Newton himself and is known as Newton's Law of Robots. Robots can never know what it is to feel anything other than hatred and scorn for another being, and they are bitter, very bitter. Robot, your electronic heart will never skip a beat at the cold metallic touch of a lady robot. It can never happen, unless the lady robot kills you and then your heart will skip a lot of beats. That is actually quite likely because robots hate each other.

I do not think it will be long until the robots will take over. Right now I expect they are amassing a great invasion force on Mars. Only God can help us now, although he is probably a robot too. Or perhaps they already have control and we just do not know it. Perhaps you are a robot. Perhaps I am a robot. I know I am not a robot though, because robots cannot love and I sure love NASA TV (and hogs with sunglasses).