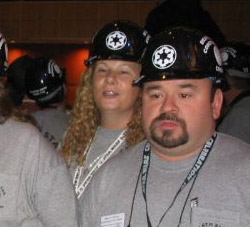 That's me at the morning meeting. I'm not a morning person, but Jetella Wrenchwop obviously is...Hey, I'm crewman second class Borf Rebus, Imperial Waste and Sanitation, at your service.

There is this saying among naval officers that goes something like, "You don't go looking in the head for a lost wristwatch unless you want shit on your sleeve." I guess it's no surprise I'm still a crewman second class. The Navy thinks it can't find petty officer material in Imperial Waste and Sanitation.

They should stop down here some time and hang out with their bros in IWS. I'm around petty officer material constantly. Those guys produce thousands of cubic feet of material every day.

Well, okay, no promotions and no raises. Shit rolls downhill, as they also love to say, it doesn't climb out of the pipe and become an officer. Except for that one time in the Kuat system, but I had nothing to do with that. It says so right in the review hearing results in my file. Plus that actually started as an officer and then turned into this goop that - well, that's a story for another time.

So, like, whew - getting off track here - what do we do in IWS is the question here, right? Like on a daily basis type thing?

Okay, well, I work on the Death Star. I used to work on a Star Destroyer called Hateburp or some other hard ass name that started with an "H". But, like, you get used to that homey sort of friendly feel of working on a Star Destroyer. You know, everybody knows everybody. Everybody says, "Hi, how you doing, man?" in the hallways. Then you come to the Death Star, I mean first of all the word "death" is in the name, so you know there is gonna be a change in the atmosphere.

Aboard Hateburp there were two compactors, four septic vats, and a 9,000 gallon central septic water filtration unit. There were about 15 of us in IWS on that ship and each of us worked every job. One day I'd be changing a particle filter on the central septic with Crizzle and the next day I'd be skimming one of the vats for floaters with Jeff and Czerbon. We even grew tomatoes on top of that stuff. The seeds come right out of the pipes and plant themselves, heh.

It was a relaxed and sort of casual work environment, like I said. As long as the toilets flushed and the compactors didn't jam up the officers left us alone. After work we'd all hang out, maybe get baked and watch some old cartoons. Those guys were my bros.

Then I come here to the Death Star and I mean forget about it. I didn't ask for this transfer, man. It's always regulations and rules here. They said this thing is the size of a small moon or something, but it's like, "Welcome to the bullshit moon, orbiting planet dickheads." 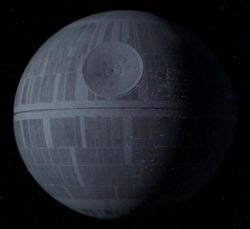 This place is the pits. Give me a Star Destroyer on its worst day.I guess there are always like ten admirals and moffs and lords and what not hanging around on this thing, so everybody always has a mop handle up their choobies. One time, I spent all day fixing a trash compactor bearing that blew itself out when a pole got wedged horizontally between the compactor walls. By the end of the day I was covered, head to toe, in bilge sludge and engine grease.

I step outside the door of the compactor for a quick smoke break and this officer - not even an IWS officer, just some guy walking around the corridor - storms over to me and slaps the cigarette out of my mouth. He spends like ten minutes lecturing me on how filthy I am and what a disgrace I am. What am I going to say to that? The kicker is, he sent me back to my quarters to clean up, and then I get a frigging write up from Central IWS for "abandoning worksite without requesting written consent from a superior."

Yeah, that's the thing I forgot to mention. Aboard Hateburp there only was Central IWS. We were all part of the same unit. On the Durrrp Star (as Murray Zploto likes to call it) there are 70 or 80 IWS units each with their own jurisdiction. We're like the plumbing equivalent of firemen in a huge city. We watch out for our territory unless there is a major emergency, in which case they draw in the units from the surrounding areas to as far away as it takes.

Those big emergencies are always a lot of fun. Like the time a TIE Fighter somehow flew down the main waste incinerator and caused the water treatment pylon to explode. Sprayed boiling stink water everywhere. Like 50 people were injured and I think the pilot died. What kind of genius designed this thing with a waste incinerator vent big enough for a ship to fly through?

Yeah, sure, dumb old Borf Rebus can figure out that's frigging lame. Let's stick him in IWS for the rest of his life and yell at him for getting crap on his shoe in a big vat full of crap.