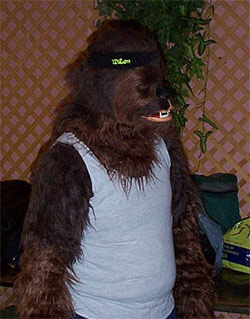 Thanks for the great advice!You probably don't know me, but my name is Xargo Griss and I am Darth Vader's physical therapist.

Before I get started, let me take a second to offer you a tip: never follow life or career advice from a Wookiee.

I was taking a five-week accreditation course to get my PT certs at a community college on Endor. I figured I could maybe get a job with the Empire or one of the big trade federations doing leg and back work on their employees. Repetitive stress injuries and pulled muscles, that sort of thing.

There was this Wookiee that sat next to me, guy by the name of Ted I knew from some parties around the campus. He was a real loaf, never washed his hair, so he smelled like sour beer and old puke every day in class. Sort of like a cross between a frat boy and the bath mat at a frat house. Not really my type, but I don't discriminate when it comes to friends.

One day we're ignoring the lecture on hamstrings and shooting the shit. I tell him about my plans after I get my cert and he shakes his big mangy head. Ted tells me that the way for a PT to make the big bucks isn't to get a job servicing a bunch of scrummy stormtroopers. He says you want one big juicy superstar client. You need a high-maintenance diva that wants a lot of attention and has enough money to set you up for life.

Ted claimed his dad knew this Geonosian physical therapist named Alan that had it made. Back during the clone wars Alan worked PT for this banking clan doing foot massages and teaching the employees how to stretch so they wouldn't tear their trapeziums using an adding machine. Alan befriended this big shot security guy by the name of Grevious. Yeah, that Grevious, only he wasn't all screwed up back then.

When Grevious started to work for the Separatists Alan went along to do odd jobs and the occasional hot stone massage for the officers after a hard day blasting clones. He didn't do a lot of work for Grevious, but Alan was technically on his staff. Then one day Grevious got blown to pieces by the Republic. Not much left of him but a heart and a few chunks of his spine. Maybe some brain or something.

Alan figured everything was over with and he would lose his job, only Grevious was all wheezy and out of shape and screwed up. Every piece of him that was left hurt like hell. Turned out Grevious needed a personal PT 24/7 just to function and Alan was set up. Big money, hot broads, and just one boss telling him where it hurt.

The punch line of that flashback-within-a-flashback is that Ted neglected to tell me about how the story ended. I learned years later that Alan was aboard the Invisible Hand when the General had the bright idea of taking Chancellor Palpatine hostage. The poor dude died when the ship crash-landed on Coruscant and I'd be willing to bet General Grevious, for all his wheezing, didn't give a shit.

Like I said at the beginning, the moral is never trust a Wookiee's advice or you might end up like me. You'll be working for the most hated villain in the galaxy and liable to die at any minute.

I guess that's why you asked me to do this. You wanted to know exactly how bad it can get working for someone like Vader. It has its ups and downs, but man, those downs are really down there. Everyone gets yelled at by their boss, but have you ever been yelled at by your boss while he's suspending you in midair with his mind? It's happened to me twice.

Bear with me on this. I'm not much of a storyteller, but my therapy diary pretty much tells the story for me. It's not really a work log so much as just my observations about my job. If you don't like that you can edit it however you want.

To give you some frame of reference, I started working for Vader when he made a stopover on Bespin for some sort of secret mission. I've been with him ever since then. 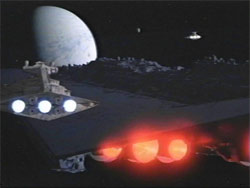 I guess I'm on like the flagship or something.It's my third day on the job and I still haven't done any work. I'm aboard the hugest spaceship I have ever seen and even though I'm not doing much it is super exciting.

The ship is called the Executioner or something and there are like a bazillion people in their snappy uniforms. I knew working for the Empire would be a hoot and a half, but this is just so deliciously fascist. You hear their little boots clip-clopping around before you see them coming. You'll never be surprised on a ship like this.

Shelly, Lord Vader's assistant, gave me a quick tour of the crew quarters yesterday. Other than my cabin and the cafeteria it's all I have seen of the ship. Shelly is absolutely cute as a button and she is hilarious. She has one of their little black uniforms with the little colored squares on the front, but she's got special patches. I asked her if I could get a uniform too since I'm an employee and she told me I had to go to the navy academy. Bumo!

I also met the head of physical therapy today. He is a big snakey guy named Ssteve. I think Shelly said he was a Trambojin or something like that. Very cold and very mod, with a little black suit jacket and some silvery eye shadow. Like a leathery Dunk Nytestrider on his Supernova tour.

Ssteve showed me the gym and the therapeutic pool. No big deal. He seemed nervous about showing me stuff and wasn't very nice. I told Shelly that after I met him and she winked at me. I don't know if she was being fresh or what. I told her that hopefully I get to meet Lord Vader soon, because I have a lot of ideas about how I can help with his condition. I don't really know what his condition is, but it pays to act informed. 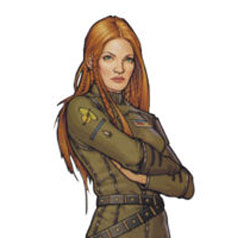 It's a sausage fest in the navy, but there are exceptions.Oh my freaking crap, I cannot believe my day today. Woof, where to begin.

I'm sitting in my cabin doing my morning crunches when I hear a knock. I open the hatch and Shelly is there looking a little bit flustered. She gets even more flustered when she sees I'm all sweaty and wearing my workout shorts. That girl is barking up the wrong tree fierce, but that's another story for another time.

Shelly tells me I have to get to Lord Vader's private chamber in the next fifteen minutes. I towel off, change into my PT clothes (which are a little more modest), and run over to Lord Vader's chamber. Just as I'm about to knock, the door opens and out come two stormtroopers dragging Ssteve. His tongue was flopping out of his mouth and his eyes were open and bloodshot. I think he was dead.

Needless to say, I'm a wee bit nervous when I walk in there. I had seen some pictures of Vader, but a picture can't capture how imposing the guy is. He is seven feet tall and walks around with these stiff arms and legs like a monster. So he's standing there when I walk in and he kind of halfway whirls on me with a flourish of that big black cape. By the way, I think it is so awesome that my boss wears a cape.

He has this wheezing respirator breathing that reminds me of what Ted told me about Grevious. Hopefully Vader is more than just a heart and some pieces of spine. I wouldn't even know where to begin if he's that bad.

"Ssteve has failed me for the last time," Vader says to me. "Pray that you don't make the same mistakes as him."

I ask Vader about Ssteve's mistakes, but Vader ignores me. He starts bellowing in that deep voice of his that he wants his physical therapy to commence immediately. I noticed that there are some ribbons lying on the floor near a bench and I realize what probably got Ssteve killed. He was a fool to suggest twirling to someone as stiff and ominous as Vader.

Vader starts in about commencing the workout, so I tell him to take off his boots and I start with some nerve massage on his feet. Ripe doesn't even begin to describe the way those tootsies smell, but the real kick in the face is Vader's skin. As I work my way up his calves and have him do some extensions I get the big picture. Vader looks like a cooked goose with extra crispy skin.

So I am about done with my massage and ready to move onto some stretching and low-impact stuff when I make my big mistake. I ask him if he's ever considered bacta treatments for his skin. Just like that I start choking, like someone is grabbing my throat but there is no hand there. Vader turns on me, at that point he's just wearing his helmet and a black diaper type thing, so he looks extra creepy.

"My master provides me with a cocktail of healing drugs," Vader booms, "I would die without them."

Shelly runs in and starts talking to Vader as he's choking me. Something about how hard it was to find a replacement to Ssteve and something about a guy named Piett. Vader stops choking me and I fall on the floor.

"I apologize," Vader says in a monotone, "it has been a very long day. Maybe some time in the therapeutic pool would be good."

I get up and nod to him. The rest of the workout goes off without a hitch. He does a good half hour in the wading pool, about ten minutes on the treadmill, and then I cool him down with some low-rep work on the weight machine.