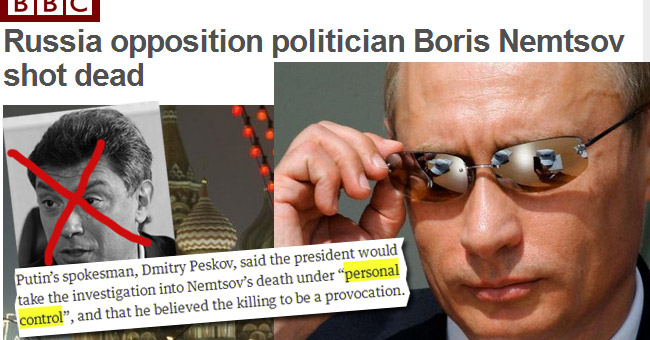 The Case of Boris Nemtsov 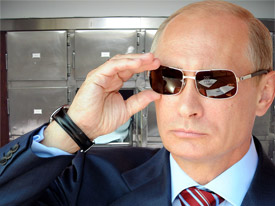 Supreme Detective Putin arrives on horseback at the morgue. Gets down from horse and flips over lid of box holding remains of opposition leader Boris Nemtsov. He takes off his sunglasses and pokes and prods his finger into the Swiss cheese holes in Nemtsov's back.

"This is very weak blood. Homosexual blood. And these bullet? Forensic say only made in Ukraine," declares Putin. "They use very weak bullet. Is fatal because of very weak spine. See this? Is spine pussy. Shot in spine pussy by Ukrop bullets to make martyr. CIA maybe. Okay? No trial. It is very sad the CIA continues murdering opposition to me in plot to make me look bad."

He signs an 8x10 head shot of himself scowling at a tiger, hands it to the coroner, gets on his horse, and rides out.

The Case of Warehouse Massacre 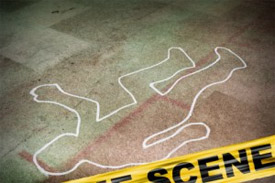 Eight unidentified men found with bags over heads and bullets in necks. Putin rides in back of SUV slowly past the warehouse where their bodies are being recovered. SUV does not stop. Tinted windows do not roll down. He calls a pale man in an overcoat with a scar down his face.

"Yes, FSB Commander," says Putin into telephone. "Men are Chechens killed by Chechen terrorists to make martyr sympathies for Chechen cause. CIA and Ukraine supply weapons. Arrest leader of opposition party and make him confess to being CIA. No trial."

The SUV continues onto the highway.

The Case of Break In at Opposition Headquarters 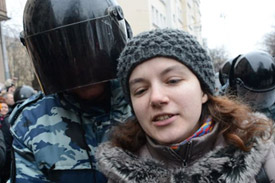 The opposition party headquarters reports windows smashed and computers stolen to Moscow police. SD Putin arrives in a giant helicopter and removes his shirt to get a better look at evidence. He promises, "We will find computers and who did this."

The next day, at press conference, "We have computers recovered full of pedophile sex pictures and a USA flag wallpaper. Also here is recording of opposition leader saying 'Piss on Russia it is bitch.' Opposition stole own computer to make martyr sympathies. CIA involved in fake set up martyr theft. Unfortunately all of opposition party went for policeman gun."

Answers questions from Russian press about the case such as, "Why does America allow gay to have baby while killing baby in Syria?" and "Why did USA and Britain shoot down Malaysia Airline flight and then lie to world?"

The Case of Oligarch Killed in Office 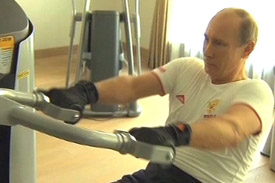 Gorky Karamazov was hacked to death with a machete and shot by two different guns. SD Putin arrives at the crime scene and immediately walks over to a weight machine in the oligarch's office, sets incredible maximum weight, and begins working out. He solves the crime while crushing reps on record amount of weight.

"Is suicide," he says. "Karamazov was secret homosexual and pedophile. His Ukrainian lover demanded he tell wife. Too much guilt so he hack himself with machete and shoot with guns to try to implicate FSB. CIA help. No trial."

He poses for a photo with a crying child before leaving.

The Case of Sexy Model Dancers Found Dead in Hotel 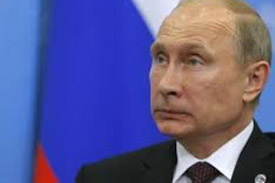 Three beautiful model dancers are found dead in Moscow hotel suite. A black SUV with tinted windows pulls up next to crime scene. The back passenger window whirs down to reveal Putin wearing sunglasses. He peers over his shades as a policeman approaches the car.

"Supreme Detective Putin, cause of death to these three beautiful women is severe trauma."

Policeman hands Putin a tablet with photos of the women from a modeling agency website.

"Yes, this crime is solved. Not a crime. I am cause, I remember now. These women made me have sex with them until they die. This is normal. Please note in report it is because my penis is of too large size and too heterosexual. CIA also sent these Nazi girls to kill me. Self defense. No trial."

Another case solved, Putin returns to his office to stare at the flag of Russia until he is needed again.