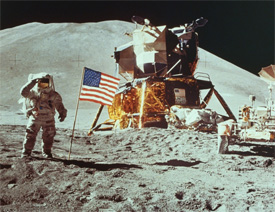 Mankind reached into the stars and Neil Armstrong and Buzz Aldrin landed on the moon in 1969, but our journey outward from this tiny blue speck does not have to end there. If mankind mobilizes our greatest minds, our most courageous spirits, and the resources of our great nations, we might just be able to send fifteen to twenty of the wealthiest people into space.

It is a dream we have shared for generations. That eternal hope to see the richest among us blasting into the heavens aboard our greatest technological achievements. Can Tesla's Elon Musk stand on the moon? If we dare to believe it is possible.

We will marshal the strength of the human spirit to allow telecom mogul Carlos Slim Helu to look at a dang huge comet up close. He'll see ice dust sparkling in the void and the brilliant blue light of Neptune or something else we can hardly conceive.

The hopes of millions of children may just be able to propel Oracle's Larry Ellison into orbit around some faraway place like Saturn. He will watch meteors crashing into asteroids. He will carry mankind's aspirations into the far blackness and shoot a laser at a rock. 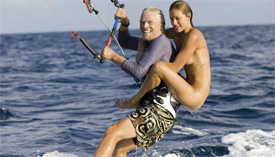 Together, we might just make it possible for Richard Branson to finally land on Europa and finger bang a model. We can help Dean Kamen cry and use a diaper while he looks at the majestic beauty of Saturn's rings.

What of Bill Gates and Vladimir Putin? There are new technologies which some believe may make it possible for them to leave our solar system and travel by wormhole to faraway places. If we abandon our wars and our social safety nets and medical research and schools and buy trillions of dollars worth of Windows 8 and Russian natural gas we might just be able to open a gateway to a new planet where three or four super rich old men and their doctors might live.

In our lifetimes, David and Charles Koch, Warren Buffet, and maybe three to four other extremely rich men and their wives might walk upon the face of a hospitable alien world. They can finally have whatever laws they want. All it takes is the collective willpower to make it happen.

We can witness the dawning of a post-terrestrial age, when anyone with over 50 billion dollars net worth can see an alien clam and eat an alien bird. 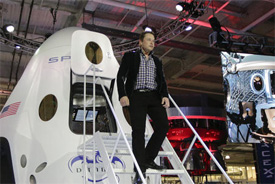 The Chinese, new masters of the earth, are doing their own thing, landing taikonauts on the moon and maybe Mars. But someday we hope that they will realize their full potential and join with the world community to send a few super rich Chinese men into space.

Imagine the stories those extraordinarily wealthy Chinese men could bring home to school children and dreamers of all ages. They could talk about how bright the stars look against the blank velvet of the infinite and how Jupiter is orange. And space food is actually not bad. And there is an upside down toilet on their spaceship.

It is only sad that Steve Jobs did not live long enough to be blasted off the earth and see the wonders of the universe. He could have looked back and realized how insignificant everyone was trapped on that little blue turd. He might have eaten a seared salmon looking out a meter-thick window at the surface of Venus. Imagine all he could have eaten while sitting on Venus waiting for the return rocket to launch.

Generations once believed that someday mankind would truly venture among the stars and usher in a great new era of exploration. Be reasonable. This is good enough.