Don't Wear it Out

I take a reasonable sort of pride in my name. A fine name it be, both grand and humble, combining the regality of “David,” most beloved of kings, with the quaint village charm of “Thorpe.” It suggests an everyman who rose to the top, a man of nobility content to live among the salty rabble. The small-town boy made good. The diamond in the rough. David Thorpe, a good sort; he could buy and sell you all twice over, but he still takes his hat off for a lady.

I hope that those who share my name take similar care in living up to it. I would hate to share the world with a sleazy David Thorpe, one with bad teeth and grubby fingernails, one who claps flies between the pages of books and then admires the smears, one who would adjust his male basket area in public without a second thought. Sometimes I snoop around for other David Thorpes to see how they’re making out. One’s an artist in the UK. A few of them are professors and scientists. Most of them, thank heavens, wear it pretty well.

But those create an inaccurate representation of the David Thorpe demographic. Those are only the newsworthy David Thorpes. What of the common David Thorpe on the street? What are his dreams, his fears, his hidden crimes?

Perhaps the best feature of the social networking site Myspace, aside from the easy availability of young women with dark eyeliner and shabby virtue, is the “search” function. Type in any name, and Myspace shall deliver. The best use: find a news article about some teenager who went nuts and fatally bludgeoned his biology teacher with the jawbone of an ass. Punch in the kid’s name. Nine times out of ten, he’ll be on there, and his friends will have left a million comments like “Jerry, what the fuck, you used to be cool, I can’t believe you flipped out like that,” and “i luv u jerry and I hope u find piece, i cant understand y u did it.”

Who, I wonder, are the David Thorpes on Myspace? Might they be shabby rakes who disgrace my name, or dignified gentlemen who do it proud? Are any of them me? This calls for investigation: 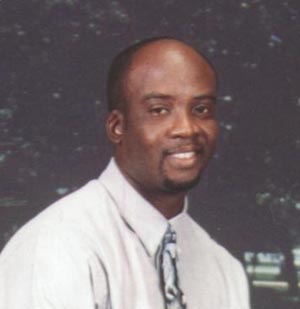 Ah, and his photograph leaves little doubt: his manner of dress, his easy smile and relaxed features seem to say “nice guy,” while his half-smile betrays a hint of loneliness: “looking to make some friends” indeed.

Cultural interests: Cricket, soccer, basketball, Michael Jackson, and The Silence of the Lambs. David is, in keeping with his surname, an everyman to his core. His interests are broad and agreeable; he looks like a lovely sort of man to rent a movie with on a winter day.

Personality: David Thorpe is perhaps not the most dynamic of individuals, but he does my good name no particular disgrace. He defines himself as “Nice, cool, lots of fun, a good communicator, responsible, a good friend and more. This is how I think of myself, all those things along with a positive person, no nonsense guy, assertive and yes I do like to have fun in a sarcastic way. I do not find fault of others and I am very down to earth.”

Despite these admirable qualities, David’s bright flame has attracted few moths. He has but one friend listed: the default friend of all Myspace registrants, the omnipresent Tom. An illustrated comment from an erstwhile friend named Jellybean still looms on his profile: a scantily clad woman in an accusatory posture stands before a cougar. Her face seems to say, “hey, get this cougar out of here.” The inscription bears but one word: “Pat.” A memory of a friendship that has fallen by the wayside? The lingering, cougar-related accusation of a former love? Perhaps we will never know. While David may appear mild-mannered and inoffensive on the surface, his profile harbors the dark memory of a former life, a life of cougars and beautiful women, a life of mystery and fantasy. 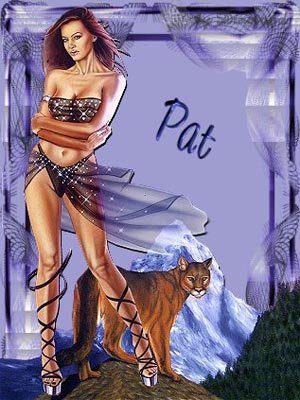 Probability of being me 18% 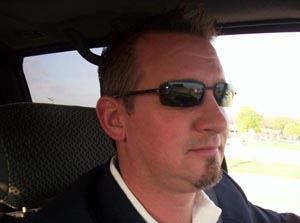 Enter the Dadtrix: David Thorpe shows off his bitchin’ soul patch as he speeds toward middle age.

Personality: While David Thorpe’s austere profile gives little indication of his personality, we find several telling facts in his personal photo section: he has somewhere between three and a dozen children, he is in a committed relationship, and he is a victim of bullying. 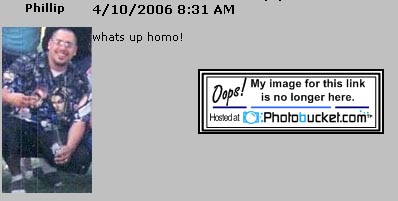 Perhaps it is because of Phillip’s constant torment that David Thorpe keeps such a Spartan profile; maybe he is afraid that if he reveals anything about himself, Phillip will only use it as more ammunition in his hurtful campaign of homophobia and cruelty. 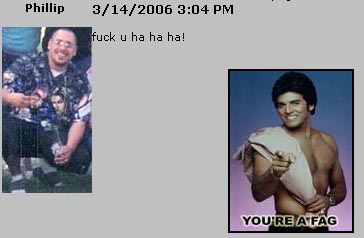 While David Thorpe projects an image of success and peaceful family life, one can only pity him for his inability to stand up for himself. Looking at Phillip’s profile, you’ll notice that David has never once left retaliatory comments. Instead, he buries his head in the sand like a frightened ostrich. Phillip clearly mistakes his unflappable pacifism for weakness: 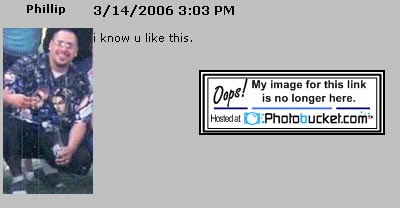 Be a man, David Thorpe. By being a pathetic pushover, you paint all the David Thorpes of the world as cowards, human doormats, and ineffectual nebbishes. I want you to march right up to Phillip at school tomorrow and tell him that you don’t appreciate his name-calling. If he threatens you or teases you, I want you to go straight to the nearest adult and tell them all the mean things he’s said to you. If you don’t stick up for yourself, Phillip will go through his whole life thinking it’s okay to push David Thorpes around. 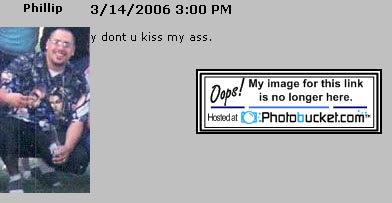 Probability of being me 3% 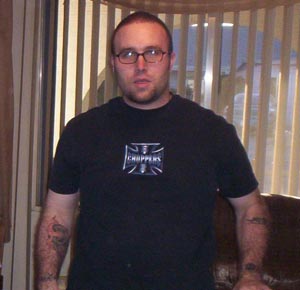 Cultural interests: Aside from his West Coast Choppers t-shirt and his slack-jawed expression, we know little of David Thorpe as a patron of the arts.

Personality: David Thorpe doesn’t beat around the bush. He tells you where he’s coming from, and he tells it to you straight: “Hello I am 25 I have 2 Girls and im on the path to divorce. I work from 4 am - noon m-f and get my kids from th etime i get off till about 5 pm then weekends all day. I love computer games and Howard stern! I am kida shy and sarcastic and I pretty much only care about myself i know its bad but thats my life. I am getting divorced because I didnt talk to her, prolly cause we have nothing in common and she doesnt stop talking once she gets going The one thinkg we both liked was the bedroom scene.”

Perhaps David Thorpe’s refreshing frankness is why his profile lists no friends: people just can’t handle his no-bullshit attitude. While I admit that David Thorpe is exactly the kind of man who would clap flies between the pages of books, something about his no-nonsense autobiography left me yearning for the simple life of the common oaf:

“Brendaaaaa! What the fuck! I asked for a fuckin’ bagel dog like half an hour ago! What? Come back in here, Kaylee. What did you say? What do you mean Brenda left me? What the fuck do you know, you’re only five years old. Oh, yeah, now you’re gonna cry, great. So ‘mommy’ left, huh? Why the hell didn’t she tell me? I gotta hear it from my fuckin’ five-year-old kid? Yeah, big deal, she was always just fuckin’ talking anyway.

Hey! Get back in here! No, you can’t go play with your goddamn dolls or whatever, because you have to do something for daddy. Go look in the freezer and get a fuckin’ bagel dog. You’re gonna go into that kitchen and you’re gonna learn how to use that microwave. You’re old enough.

No, get away from me, I don’t wanna see you again until you’ve got a bagel dog in your fuckin’ hand, okay? What? Why would ‘mommy’ have taken my fucking microwave? That shit was from my side of the family. Well I don’t know, figure out how to work the oven. Don’t they teach you that shit in girl school or whatever? Oh come on, quit crying or you’re going to wake up your little moron sister. Or did ‘mommy’ take your sister, too? Christ, I fuckin’ hope so right now, I swear to god.” 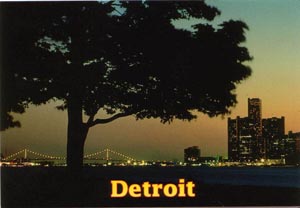 Cultural interests: David Thorpe’s friends include none other than T.I., Beyonce, 50 Cent and Eminem. Anyone who has befriended so many celebrities is clearly no stranger to the world of urban music.

Personality: David Thorpe’s profile bears only a simple inscription: “i love my self, but i fear god.” Sixteen is an awkward age for any young man; young David Thorpe is currently in the midst of reconciling his hormonal demand for self-love with the religious shame and anxiety it brings about. Have no fear, David Thorpe, we’ve all been doing it for years and none of us have been struck dead by lightning bolts yet (knock on wood).

Of all the David Thorpes I have encountered today, this one seems to strike me as having the highest probability of being me; perhaps it’s only because he’s called “100% real NIGGA JR.” As many of you know, I was ranked as number 32 on Grand Hustle Magazine’s 2005 critics’ poll of Realest Niggas Alive, right below LeBron James and right above Rae Dawn Chong.

Probability of being me 88%