As the last Doom-related spree-killers reach middle age, console gaming has completely taken over the headlines. It's "Halo this" and "Grand Theft Auto that" in 2006, and they definitely don't mean the delayed PC ports of either. Franchises that have traditionally been only available for the PC have made the leap to consoles and often become even more profitable there. PC gaming has been eclipsed by the profitability of consoles, but there is one distinct area of PC games that consoles still have not touched: the little guys. It's still not possible to release a game on the PS2, Xbox or Gamecube without tens of thousands of dollars for expensive duplication and licensing fees.

PC gamers, on the other hand, have access to a wide world of demos and freeware titles developed by just one or two passionate people who believe in their game. These games often go largely unnoticed or are only noticed in passing by a select few. Today, I would like to do my small part in changing that by recognizing some of the best freeware and shareware games available right now. You may have heard of a few of these games, but I promise that nearly everyone will find a gem in this update they have never seen before. 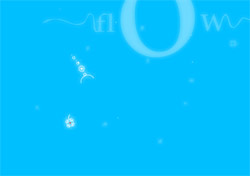 Description: Beautiful, relaxing and confusing, Flow allows you to take over the evolutionary steering wheel for a scoop-equipped microbe in a shifting sea of predators and prey. The game is pretty pretentious and it took me many minutes to fully grasp how the game was played. Basically, you navigate your creature deeper and deeper into the evolutionary soup, growing larger and more powerful. Eventually, you'll evolve and drop an egg of sorts that transports you back to the beginning with an entirely new type of creature you have to evolve. Be careful or the gently strobing lights and new age sound effects will make you fall asleep at your computer.

Developer: Jenova Chen created Flow, with a little help, as her (UPDATE! HIS, it's a boy) master's thesis. Who says higher education never benefits the masses?

Very atmospheric and attractive despite the extremely basic graphics.

Almost too esoteric for its own good.

Downloads: Jenova Chen has made Flow available to play either online or offline on her website. 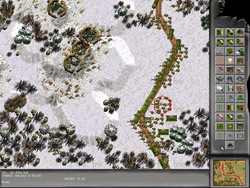 Description: Steel Panthers was first released in 1996 as a turn-based, top down tactical simulation. It was and is complex, but very deep and rewarding for the war gamer. Believe it or not, the graphics were actually pretty awesome for a war game when it was initially released and they look better than ever. I have been playing it, on and off, since the day I shelled out 50 bucks for the CD ten years ago. The game's freeware code has become two fantastic games in Steel Panthers: World at War and Steel Panthers Main Battle Tank. The former encompasses the years leading up to and immediately following WWII and the latter encompasses pretty much everything else including the near future. Both games allow you to play as nearly any nation existing at the time you choose to fight.

You can play single battles, scripted scenarios, branching campaigns or generate dynamic campaigns by setting a variety of parameters. Every infantry type, air unit and land vehicle imaginable is included in one game or the other. You could reenact modern day battles in Iraq with SPMBT or jump in the Harry Turtledove machine and do battle with the United States circa 1944 as a triumphant Poland in SP:WaW. Whatever pairing, whatever weapons and equipment, whatever length of time and number of battles: it's all up to you in this versatile and still addicting game. This is what the Combat Mission games could be if their potential was fully realized.

Developer: Both titles are based on the Steel Panthers game developed by SSI and released in 1996. Though many of you probably have not heard of the original game, it was (and is) wildly popular among the war gaming community. When SSI went under, the code for Steel Panthers was released as freeware and prompted the development of a number of vastly improved home versions of the game. SP:WaW was developed by Matrix Games and SPMBTwas developed by Shrapnel Games.

Unlimited replay value with dynamic battle and campaign generators and tons (literally, you will be crushed under the gigabytes) of meticulously detailed fan-made scenarios.

Every weapon and every nation.

A powerful editor allows you to create scenarios and battlefields.

Despite their best efforts and improved resolutions, the developers can't hide the dated engine and graphics.

Some actions seem to drag out way too long, like driving a tank near enemy infantry you will be shot at roughly a thousand times every hex you move even though the infantry can't damage your tank.

Abysmal AI. Scripted scenarios are challenging but the dynamic battles and campaign are far too easy unless you intentionally hamstring yourself every battle.

Cannot dynamically generate awesome scenarios like "one M1A2 Abrams tank versus all of Nazi Germany."

Dinosaurs and mechs are not fielded by any nation in the game. 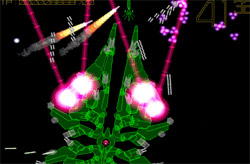 Description: Warning Forever is one of about 5,000 Japanese-made freeware shooters. The game's developer, Hikoza'n-CHI X, describes it thusly:

When the game is begun, because the boss comes out suddenly, please push down. As for next the boss who a little has become strong comes out. Because it is the below same sentence, until it dies, please enjoy. There is no end. Because growth of the boss changes with the method of playing, it can enjoy many degrees.

I'm sure that sounds much more sensible in Japanese. What Hikoza'n is trying to say is that Warning Forever is one big frantic string of boss fights. The bosses adapt to the way you killed the previous bosses, so that it is endlessly challenging, and I do mean endless. "Forever" ain't half the title as a joke.

Developer: I don't know if Hikoza'n-CHI X is a person, a group or a company, but they/he/she has a lot of really weird games.

Fast-paced gameplay will hone your reflexes until you can dice rice.

Evolving enemies prepare you for the natural horrors you must face in the real world.

Seriously, you will lose your job because of this game.

Downloads: Check out Warning Forever and many other even stranger games on the Hikoza'n-CHI X website.

Attack of the Killer Swarm 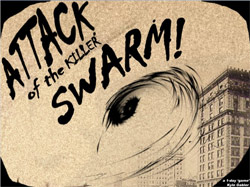 Description: I love this game. You're the titular attacking swarm and it's your job to swoop down and scoop up the shrieking pedestrians and fling them into the air as high as you can. There is no variety to the gameplay. The graphics have a ton of character, but they are very simple. Attack of the Killer Swarm is just an awesomely addicting sandbox for you to abuse shrill blood-filled women with a swarm of vague composition.

Developer: Developed by Kyle Gabler over the course of two days, Attack of the Killer Swarm is part of the Experimental Gameplay Project. Once you've had your fun with Kyle's awesome work I suggest that you check out some of the other games on the site. Few are anything more than time killers, but they're fun time killers.

Screaming women that explode into a welter of blood and it gives you points!

It's great fun while it lasted, but you'll probably be done with it after about half an hour.

Downloads: You can download Kyle's game directly from the Experimental Gameplay Project site, but I would suggest poking around there rather than using the direct download link. 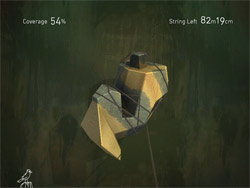 Description: If I had to suggest just one game in this article to a random person on the street it would be, without a doubt, Zen Bondage. It's got an awesome "gee I wish I had thought of that" concept in which you wrap a rope around three dimensional wooden blocks. It sounds stupid, but it's stupidly awesome. Wrapping the block with rope is easy, but you have a limited amount of rope and you have to "stain" the entire block with a texture that emanates from the rope. Zen Bondage oozes style. The graphics are completely professional and it has a funky-fresh soundtrack that you will be listening to long after you take a break from the game.

Developer: Zen Bondage was developed by Moppi Productions, but good luck finding mention of the game on their train wreck of a website.

Some of the blocks will have you wanting to murder God. Don't even load the snake block unless you want a reason to stab a screwdriver through your eye socket.

Downloads: You can snag the game directly from the Moppi Productions site. Uh, let me go ahead and turn some of this text into a link because you'll never find the link on their site.

Those five or six games should keep you occupied for the remainder of the year and that's just a taste of the sort of independent game development that makes PC Gaming a uniquely lively platform for gaming. Most of these games lack the polish or the depth - and they certainly lack the development budget - of their peers on consoles, but there is a place for these independent games that is not being filled by those peers. I hope you'll have as much fun with these titles as me.