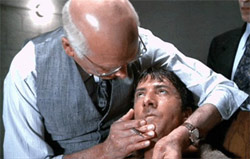 Are we safe?Going to the dentist as a kid is probably the second or third most traumatic thing that can happen to you. It possibly tops being physically abused but comes in a close second behind getting molested. You would enter the dentist's office and sit down in the big scary chair. The nurse would speak to you in a soft and comforting voice and for a minute you might be convinced that things were just fine. Maybe she would have you bite down on that padded mouthpiece and shoot some atoms into your face to take a picture. "Hey, that didn't hurt at all!" You say to yourself. "Maybe this isn't going to be so bad."

Then the dentist would enter with his gleaming stainless steel tools. He scrapes hooks over your teeth and gums, he prods and pokes and suctions off the blood and saliva filling your mouth. If you're lucky that's all he does, if you're unlucky he starts talking about what a shameful train wreck your mouth is and tells you, in his disapproving voice, that you have failed your teeth. It's time for some of them to go. The prying, the drills, the cutting and the needles all come in quick succession and in no particular order. It's ten times worse than your childhood imagination dreamt possible. How is what this guy is doing even legal?

Then it's all over and you're sort of dazed and woozy. You have a mouth full of gauze and the taste of that horrible fluoride wash at the back of your throat. The dentist explains to your parents that you "may need braces" and then, perversely, he hands you a sucker for being such a champ. After the torture and lectures you find yourself holding a piece of candy as compensation for enduring the hardships of the dentist's chair. With a bit of luck, for the dentist anyway, this sugary reward will be the seed of new suffering during your next visit to the dentist's office.

Memories of my early visits to the dentist have been refreshed by a recent proposal floated by republicans to offer 100 dollar tax rebates for every driver. America is enduring the worst fuel prices in its history and many suspect the government of collusion with large oil companies. We are hideously dependent on foreign oil and rather than sell us on alternative energy the solution is to sacrifice our Arctic National Wildlife Refuge to the oil drills and pipelines. In exchange: a sucker, to rot our teeth all over again. We may need braces.

I don't want to insult your intelligence, but both our president and vice president were oil executives and both have deep roots in the industry and strong ties to Middle Eastern oil concerns. Do you think they have the best interests of the American people in mind? Do you think they want us to shake off our addiction to oil? That blood all of the protestors promised was being exchanged for oil? It turned out we were just exchanging it for some more blood. We've already got plenty of blood! We've got gallons of the stuff running through the streets! Where's our cheap oil?

The democrats, the theoretical foil, the bumbling Costello to the republican straight man, have offered a number of fantastic solutions to the dilemma of soaring fuel costs. They have, uh, given speeches at gas stations about rising prices and conservation, after which they are photographed piling into their gigantic SUVs. They have also…they have…uh, well they said the republican idea sucked, which I guess counts for something but it sure doesn't fill up my car with cheap gasoline, hydrogen or even blood.

In short, no one in the government actually cares about solving problems. They care about self-serving plans to bolster polls and hollow photo ops at gas stations that make them look like they might give a damn. Bread, circuses and lip service might get you a baguette and a case of genital herpes at Lollapalooza, but they're not actually helping. As a highly esteemed member of the blog-o-sphere, Wolf Blitzer has told me that I am empowered to solve this problem all by myself.

STEP ONE: Institute the Parsons Formula

One of the problems with our current foreign oil dependence is that the United States is purchasing oil from all the wrong places. We buy oil from countries where they hold demonstrations demanding the United States be submerged in acid. We buy oil from countries that sell nuclear material to terrorists so that they can blow up the United States. We buy oil from everyone, but we need some better quality control. That is why I have devised a simple mathematical formula that can be applied to any oil purchase. It won't solve the problem of our foreign oil dependence, but it will reduce the number of nations we are buying oil from and force us to seek out alternative energy as a necessity.

To explain the equation, if the value of X (the number of American flags burned daily) is greater than the value of Y (the number of barrels of oil we can buy from them daily) then we will not purchase any oil from that nation. It should be noted that X also includes any presidential effigies and also flags of individual states and the 51st state of the United Kingdom. Flags of Israel count as 1/4th of a US flag. 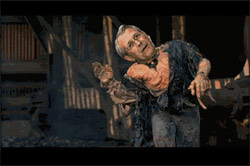 Rumsfeld knows just how terrible nuclear energy can be if not monitored carefully. Click the image to see the truth of the atoms!Alright, so step one is done and it was painful. Our oil supply has decreased and prices are rising even higher. Everyone in America is angry about that, but the good news is we have stopped buying oil from the countries where the majority of the population hates us, unless they produce so much oil that the population is irrelevant. Now it's time to start looking for alternative fuel and the easiest way to accomplish this in the near term is to go with what we know: nuclear energy. You can't power a car with a nuclear reactor, but if you can seed our power grid with sweet, sweet atoms then we can sever our fossil fuel ties in preparation for steps three and four.

It will take five to ten years and lots of money to really sink our teeth into nuclear energy, but once the reactors are all up and running you will see a national power grid positively flooded with cheap and clean energy. 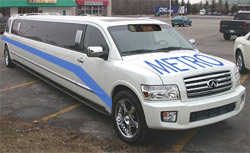 Oh, shit, I'm going to be late for the stretch Escalade!Mass transit is a major component of travel in Europe and much of the rest of the First World, but here in the United States we're addicted to cars. Even spiffy mass transit like monorails and bullet trains have failed to capture the interest of the majority of the population. How could we make mass transit more attractive? Well, how do Americans like to travel? They like comfort and control and they like huge. They want their cars to be so big that they'll get stuck in tunnels. The less fuel efficient the better. Buses are pretty inefficient when it comes to fuel, but by carrying a large number of passengers they make up for it.

I was watching a Ludacris video when the answer hit me. Stretch SUVs! They're huge, unwieldy and the passengers inside wallow in absolute luxury. Their fuel efficiency is bad enough to rival the biggest bus, but unlike public transit the stretch SUV has come to represent luxury and status. The ignorant and poor ride in metro buses, the rich and powerful drive stretch SUVs.

That's why step three is doubling the size of the metro bus fleet in every major urban area and replacing all of the buses with stretch SUVs. You are also free to drink, have sex, do coke in the back of the new bus. As an added bonus to the driver, he doesn't have to actually look at any of the passengers. Fares would have to be increased slightly to compensate for all of the luxury leather and chilled Cristal, but I have a feeling that a much broader audience will be purchasing metro cards.

Solar and wind power are inefficient sissy shit. Thermal-depolymerization (turning waste into fuel with a magical machine) is science fiction crap that came and went. Cold fusion is awesome but about 1,000 years away. Geothermal and hydroelectric power can't be used in cars. We want the oil monkey off our backs so there's only one place left to turn: hydrogen.

The third step in my grand scheme is to initiate a Manhattan Project style initiative to develop cheap and efficient hydrogen fuel cells and hydrogen engines. A lot of companies and research institutes are working on hydrogen, but it's time to pool our brain power, our resources and our money and get this shit done. With 1.21 Jiggawatts of nuclear power at the disposal of the project it should be single digit years before we're all puttering around in hydrogen cars.

This is the sort of time when the United States should actually get on that war footing and win the global war on terror by financing a massive industrial and research project that will change the world. Just like the Manhattan Project changed everything, so too would a Manhydrogen Project. There is no better way our tax dollars could be spent. Not even on school lunches.

No goal could be more important than achieving energy independence and it is within our grasp. Forget the sucker. It will only rot your teeth. Getting the braces will hurt but we'll only have to do it once.