Experimental US methods of mayhem

With all the talk of an impending war, mass casualties, and plans to blow up enemy objects in exchange for them blowing up our objects, I can't help but wonder what exciting new military hardware will be unleashed in the upcoming battles. Wars have always spurred innovation, resulting in technological leaps and the introduction of military hardware that eventually has a direct impact in all our lives. After a little digging around, I found this very interesting article:

Weapons of War - But by far the largest piece of new kit is the airborne laser — a killer beam fired from a modified Boeing 747 jumbo jet. The laser carries a massive two megawatts of energy — enough to power several small towns — but is so accurate it can pick out and destroy an individual in a crowd 180 miles away without harming people around him. A full fleet of these planes is not expected until 2008, but at least two prototypes are in working condition.

Did you just read what I read? That article claims we have a LASER DEATH BEAM on a jumbo jet, patrolling around and possibly vaporizing people at will. That's right, a LASER DEATH BEAM. It's about time the military started using lasers to kill people. Up until this point lasers didn't to a damn thing except really wussy crap like removing cataracts, cutting metal, and hanging out at laser bars on the weekends. I can sum up all the laser activity so far in one single word: BORING AS HELL. The single word there would be "boring" but it seems if "as hell" somehow snuck into this article despite my tightening of website security and random letter strip searches. Regardless, this article claims we have laser death beams, killer robots, swimming missiles that decide to fly, and bombs that go through rock. These are all incredibly useful inventions, particularly if we're ever attacked by rock monsters or the City of Atlantis. The article also brings up an interesting point, and I'm not talking about a point that makes you blow up when it touches you. If these high tech weapons have been made public, what mechanical monstrosities does the military have that they don't tell us about? We all know the government sneaks around and does highly secret stuff like Santa Claus except instead of wonderful presents, the government brings horrible death. So what classified tricks does the US government have up their collective sleeves? We here at Something Awful were able to get ahold of some highly top secret documents from the government, papers which were so secretive that they didn't even exist. Let me take this moment to share with you the most advanced gadgets of destruction that the US government is just waiting to test out on Afghanistan. 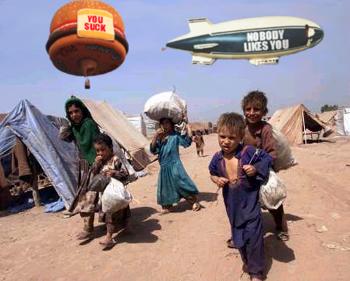 The Disapproval Balloons float overhead, sending out a dramatic and deadly message.

Disapproval Balloons - While many war analysts have been going on and on about the possibility of chemical and biological warfare, they seem to ignore the most important threat: psychological warfare. The US Air Force has constructed a fleet of Disapproval Balloons, squadrons which float majestically throughout the air above enemy cities, displaying disheartening messages and potentially lowering their self esteem. These Disapproval Balloons hang over their base day and night, alerting the enemy to their various shortcomings and failure to hold a steady relationship. Eventually morale begins to drop, the enemies begin to bicker and fight amongst themselves, and their armies collapse from the inside. The enemies will soon head to their nearest mental health clinic, seeking advice on how to fix their psychological kinks. Then we drop rock-exploding bombs on their clinics.

MXS-80 Terror Bus - Four tons of sleek, suburban terror in a compact 3.98-ton package, the MXS-80 Terror Bus is known throughout the military ranks as "that bus you don't want to fuck with." Inside its seemingly banal exterior lies a deadly surprise, like a piece of Gushers candy only except instead of artificial fruit filling the center is full of attack dogs or knives or radiation or something. Actually Gushers tasted like crap and was probably highly toxic, so I suppose it's just like regular Gushers candy without the attack dogs. The bus is manned with the following deadly payload:

Guests from "The Ricki Lake Show"

Radios blaring out the song "You've Got to Live and Learn" by Joe Q. Public

The bus is completely terrorist proof, as no human being could ever get close enough to blow it up. In fact, tests have shown that approaching missiles suddenly stop responding and simply fall to the Earth within five miles of the Terror Bus. 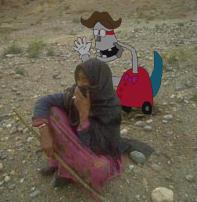 One of the Robot Adulterers gets ready to make his move and seduce an enemy woman.

Robot Adulterer Swarm - It's been kind of taboo to blow up women and children of the past. In fact, the military doesn't even like to blow up women and children of the present! Ha ha! Just a little joke there at the expense of my poor grammar! Thanks for playing along! In order to reach half of this key demographic, the US Military has created the Robot Adulterer Swarm, a series of small robots that are released from the back of a Ford SUV. These robots immediately spread out and begin seeking women in the nearby town. Once a female target is located, a Robot Adulterer approaches her and offers to help her with whatever stupid chore she's currently working on, like hitting dirt with a stick or looking at rocks. After months and months of companionship, the robot eventually makes its move and engages in romantic, stunning sex with the woman. Later that night, the Robot Adulterer delivers a tape recording of this incident to her husband, at which point he obeys the rules of the Holy Taliban, requiring him to beat the woman to death with a cinder block and then light her remains on fire while spinning around in circles and pointing in the direction of The Holy City. Soon the entire town's female population will be thoroughly charred, leaving the men of the city with no counterparts for procreation. They will then turn to homosexuality, at which point Jerry Falwell and Pat Robertson will demand their God to blow up their city for engaging in such evil activities. God, of course, blows them up because (as we all know), their god is better than any other god and could take them all in a knife fight even if he's high.

Supersized Bomb - The problem with previous bombs was that they were too small. They simply did not cause enough things to explode when they fell on them. Seeking to rectify this shortcoming, the military had the ingenious idea of creating a new bomb, one which was even larger than previous bombs. This supersized bomb, while being 125% bigger than the next largest bomb, is only a mere fraction more expensive and comes with two side missiles and a torpedo stapled to the bottom.

AKG-23 Backwards Plane - It's no surprise that the US Air Force is number one in the world, edging out England and Russia in the semifinals and completing the season with an impressive 152-28 record. Our planes inspire terror and awe to any person who finds them parked in their backyard one morning, particularly if they're just recovering from a hangover. To help increase the amount of confusion and unpredictability that wins major battles, the Air Force has created the nefarious AKG-23 Backwards Plane, an F15 Eagle which has been engineered to fly in reverse at all times. Sure it looks and acts just like any other jet, but it streaks through the sky backwards and confuses the unholy hell out of the enemy who can't tell if the plane is coming, going, or what the fuck is going on. Since the plane is always in reverse gear, enemy radar dishes display the plane as traveling in the opposite direction, unable to accurately track it. But don't take our word for it, just look at a photo of this plane in action! 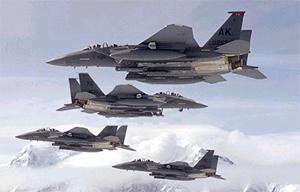 This jet is so remarkably effective that I bet you can't even tell which one is the AKG-23 Backwards Plane! Go ahead, try to pick out which jet (or jets) is the Backwards Plane from the surrounding F15 Eagle, normal F15 Eagle flying backwards and in reverse, and fake F15 Eagle cardboard cutout. That's the beauty of this aircraft - you don't know if it's coming or going until you're blown up by the Supersized Bomb that it carries!

I'm sure we'll have a chance to see these majestic weapons and so many more during the upcoming few months. The US Military undoubtedly has an arsenal of tricks up their sleeves, and I'm sure glad that I'll be seeing them through my television, as opposed to being in Afghanistan and watching them descend upon me firsthand. Especially the Robot Adulterer; I don't even have a wife, so he'd probably try to hit on me... and I don't swing for robots. At least that's my public stance, and I'm currently sticking to it.