Some of you may not be aware of a simple fact, and I'm not going to dance around it with some expository intro, I'm going to get right fucking to it: the moon landing was faked. Sure, you can attribute that sort of theory (truth!) to Art Bell fan boys and trailer dwelling Sasquatch sightseers, but that doesn't change that it really was faked. John Glenn, Neil Armstrong and whoever else was involved in the moon mission - the details are a bit sketchy - never actually left earth. They filmed all of the moon footage in a sound studio in Burbank, California; the same studio where they filmed Laugh In. The special effects team from "Towering Inferno" filmed everything with camera filters that made a bunch of sand look like the moon. The pictures of the earth? Big matte paintings. The Lander? It was made out of aluminum foil and painted cardboard.

Thursday the US government released video footage of Osama Bin Laden admitting to foreknowledge of the attacks on the World Trade Center. As much as I would like to believe that it was real, I just can't. The government has a proven track record of faking information like this when it serves its own ends. We need the continued support of our allies and the best way to curry favor with them is to make it very clear that Bin Laden really is the culprit behind all this.

With a heavy heart I captured the video released by the government and analyzed it frame by frame in a video editing program. After hours spent pouring over the footage with my Arabic friend I discovered a number of glaring inconsistencies. My duty now, as a professional journalist, is to provide you with hard evidence that this video is a cleverly produced fake straight from the Federal Government.

Item 1: Creed PosterPrior to Bin Laden and his Saudi Shayka companion sitting down for some snacks and a nice chat, we see a wild angle shot of the two men settling in. Partially obscured by a gun-toting extra is a poster on the wall, which, when enhanced digitally proved to be a poster for the band Creed.

In itself this is not damning footage, as Bin Laden could theoretically be a big fan of the band Creed or he could be staying in the basement of an angst filled teenage Christian who happens to have posters of his favorite band up on the wall. I doubt both of these cases though, so I am presenting this as item one.

Bin Laden is not a remarkable looking man and it would be well within the abilities of the US Government to find a double for him to film this obviously staged scene. In one shot that centers fairly closely on Bin Laden you can obviously see that he is wearing not just a fake nose and beard, but also glasses. This last detail is odd because Bin Laden is not known to wear glasses except when he is doing his crosswords. Editors must have spotted this error on the cutting room floor because the snippet of footage with him wearing glasses is very brief and not repeated.

During one shot in which we can see Bin Laden's lower body a stuffed Pikachu doll is clearly visible. Again it is possible, however unlikely, that Bin Laden has a great deal of affection for Pikachu and Pokemon in general. He could, much like Lowtax, rely on his stuffed Pikachu to comfort him in times of stress or crisis. I imagine being subjected to around-the-clock bombing by the most powerful nation on earth might drive any man to cradle his favorite Pokemon beneath his blanket at night.

Couple with a number of suggestive visual clues, the factual errors not edited out or only partially edited out began to solidify my belief that this video was a fake. There were a number of them, so I will only touch on each briefly.

These are probably the most damaging clues to the authenticity of the video, but there are a few more. Apparently unaware of what Bin Laden should say, government scripters wrote in some interesting lines for both him and the Shayka.

A technique sometimes used on "Late Night with Conan O' Brien", this replaces the mouth of a still photo with a video image of someone talking. During any close-up of Bin Laden a shaky and badly blended mouth will appear while he is talking. For some reason whenever he talked like this he also spoke in English and sounded just like Secretary of Defense Donald H. Rumsfeld.

I can't be certain that this video is a forgery. What I can be certain of is that my gut and my intuition are both telling me that it is one of the worst fakes I've ever seen. They should have involved Hollywood like they did when they faked that damn moon landing, at least that had an interesting ending and a better plot.

Speaking of playing god with the history books, the SA Forums have offered up another bounty of comedy to us! This time the goons have taken to Photoshopping various people and fictional characters into historic photographs. It's quite the eye opener, so take a look!

DJ "Howard Beale" thought he remembered Oscar the Grouch being nearby when Martin Luther King Jr. was assassinated. 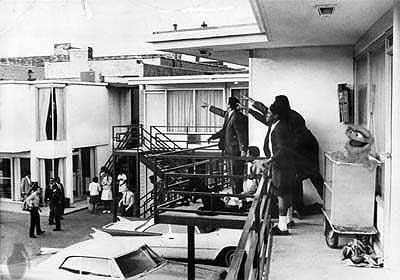 I love it when I can write a boring unfunny article and rely on the SA Forums to serve up the comedy that saves the day! Enjoy!