For years we have laughed with, and at, the late night variety show hosted by Conan O'Brien. His show Late Night has captivated audiences with its in your face gritty realism. Sorry to burst your bubble, but Late Night isn't what it seems.

Andy Richter? He was just a fictional character. I know because what comedian would be stupid enough to leave a stable gig on a late night variety show to do a bunch of awful TV shows? Now that Conan is set up to inherit the Tonight Show I bet he's really kicking himself now. How could Andy Richter control the universe if he can't even get a handle on his own career?

The kicker is, the show isn't filmed late at night. It isn't even filmed at night. Each episode is rehearsed and staged in the afternoon because Conan's bedtime is 9:30... PM.

The only late night host who isn't a phony is Jay Leno. In fact, Leno has requested that NBC hook him up to a life support system that would enable him to forgo sleep, constantly work, and never have to see his wife. Now that's the hardest working man in show business. Too bad NBC is getting rid of him. He better find work quick before he has to see Mavis for the first time in 17 years. 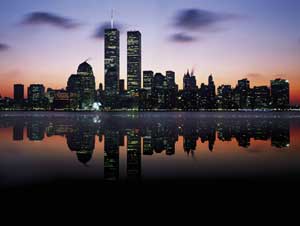 MY SKYLINEOn the morning of September 11th, 2001, when two planes were deliberately crashed into the World Trade Center and nothing else of importance was going on, I was getting ready for school when a casual acquaintance instant messaged me, as was the style at the time. He said that the World Trade Center was on fire to which I exclaimed, "Laughing out loud what?"

I thought he was joking. Then I turned on the television. There it was, plain as day, a smoking pair of ugly, ugly buildings (In retrospect, I wonder if any architecture snobs were silently celebrating that day). Were my eyes deceiving me? No, they weren't, it was the American media.

Contrary to what "truthers" believe, there was no evil scheme, dastardly plot, or conspiracy to destroy the World Trade Center towers. Nope, 9/11 was just a viral marketing stunt for the 2002 smash-hit film "Mr. Deeds" starring Adam Sandler. Hey, makes sense to me. Every Adam Sandler release feels like 9/11 all over again.

It was all faked. 9/11, the moon landing, dinosaurs. Fake, fake, fake! I saw them all on YouTube, and they look sOoOoOoOoOoOo fake! Any idiot can tell. You people are morons, believing that bullshit.

How do I know I'm right? It's that massive feeling of superiority that all armchair Internet skeptics have. And we will keep on denying that anything and everything is real until we die and meet our Lord in heaven James Randi.

When James Randi closes in for a kiss and tickles your cheek with his beard, you know it's real.