I don't know if your grandma has emailed you the news yet, but that office freak out video where the guy goes insane, throws monitors, pulls up cubicle walls and generally imitates my mom on Christmas morning is a fake. I know, I know. I'm pretty shaken up too.

Viral marketing used to be called word of mouth but now it has a gayer name and there's a pyramid involved.I'm not going to mention the movie because we don't fall for that sort of thing. But I just WANTED to let you know that one question keeps going through my mind. Why does our Internet keep lying to us?

What did we ever do to the Internet? We fed it the highest quality Goku vs. Vegeta discussions we could. We watched it grow from a cute little cyber world to this monstrous blob of depravity and swindles that consumes everybody and everything that touches it.

I just want our readers to know that we don't pull any of that viral marketing nonsense here. You can trust that we'll never disguise advertisements as something else on this site. For example, just the other day I was watching Ice Road Truckers on the History Channel when my wife comes in and says that my brand new Dodge truck looks really nice in the driveway.

She's the greatest isn't she? She always makes sure to remind me when my favorite show Weeds is coming on! Oh man, what a great show. I can't wait to tune in next week to see what whatever the characters names are on that show do with those nasty little plants that infect an otherwise well-tended garden.

If we can't trust that a simple office meltdown video on a web site featuring clips of dogs humping screaming children is real, then who can we trust? Is the Russian POW beheading video real or is it just a Muppet? Was the clip of the little girl getting hit by a train filmed in front of a green screen at Skywalker Ranch? Is a black man really running for president or is it just a viral marketing stunt for UPN? I just don't know anymore!

This new era of viral ads is causing me to distrust everything now. What else is fake? I did a little digging and found that there's a lot more that the Internet isn't telling us.

The Leeroy Jenkins incident was a funny video that got too popular for the likes of we goons and we've since declared it to be uncool to watch, enjoy or talk about, unless you are talking about how unfunny it is or how you've always thought it was stupid. They say that tragedy plus time equals funny. Well, funny plus time equals goon elitism, as evidenced by our own SAclopedia entry on the famous video.

Since then this Internet phenomenon has reached the mainstream, even enjoying a stint as an answer on Jeopardy. But alas, poor, poor dummies, it is a fake video. Heh, how do I know?

Well, let me enlighten you on some of the finer points of World of Warcraft. At one point in the video the players are calculating the chance of survival. HELLOoOoOoOoO?! This is basic stuff here people! God! 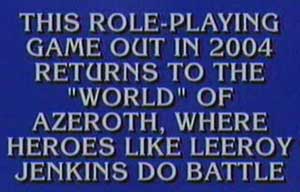 What is, "I've always hated that guy"?Also, they claim to be in a spot that they can't get past but are wearing armor found on a boss later in the instance. Uh, how do you explain that, smart guy?

I posted that the Leroy Jenkins video was fake two minutes before it was even uploaded and I hated it before anyone else. You are all morons for falling for it. Case closed!