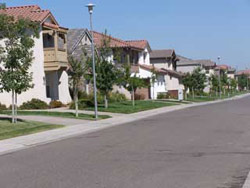 Three weeks ago I met the guy that moved in a few houses down from me in my quiet Chicago suburb. His name is Kafir and he is a single Muslim man. His family is wealthy and they bought him the house while he is attending college in the city. He is tall, beardless, olive-skinned, and he has a face that looks a bit too wide for his narrow head.

I am convinced he is the exact opposite of a terrorist.

The day I met Kafir he was standing in his driveway, arms folded across his chest, staring at a brand new lawnmower.

"The grass is horrible," he said to me, gesturing to some clovers and dandelions that had sprung up in his yard. "It is merciless."

Kafir told me, with difficulty, that he is treating his time in the United States as a sort of full-sensory anthropological investigation. He has a sense of humor about it, like he's visting one of those living history sites where bored college kids dress up as real pioneers and explain how to make a candle. Only there are 300 million of us in costumes and he can't leave until he graduates with a Master's degree.

Kafir's openness to American life is endearing, but his choice of living in suburbia struck me as a little odd. If I were to summarize the economics of globalization I would say it was an attempt by US corporations to turn the rest of the world into suburban America. I would think moving to suburban Chicago would be about as underwhelming to Kafir as an American visiting the original McDonald's franchise.

"I want to cut grass like American," he explained, speaking very precisely. "We have grass, but it does not grow wantonly."

Kafir didn't want to pawn off his chores on a hired crew, but he seemed to appreciate my honesty.

I figured it would be impolite to refuse.

The inside of Kafir's house was virtually identical to my own in terms of layout. There was a slight rearrangement of the floor plan, but it was obviously churned out by the same architecture factory. What was striking was how bright everything was. All of the walls were white, the carpets were white, and the blinds were all pulled up completely.

I sat on Kafir's white futon, my knees bumping against Kafir's glass table, staring at the blank black rectangle of Kafir's giant TV. He went into the kitchen and began banging pots and pans. He returned several minutes later, apologizing profusely, and set a delicate silver tea service on the table.

Over dainty cups of bitter black tea we tried to communicate.

"The university...I go...ehhhhhh," Kafir made a hand motion that I believe was intended to describe the shape of his university.

"The University of Chicago?" I asked.

Kafir seemed uncertain. That exchange epitomized the first fifteen minutes or so of our conversation. He would try to explain something he had seen or done in halting and carefully-chosen English and I would guess at his intended meaning. It was a game of cross-cultural and cross-language charades and we were both losing.

"Do you have Taco Bell in Qatar?"