More server problems... the forums will continue to be randomly up and down until the tech people can figure out why the server crashes every 15 minutes or so. Let's hope the mystery is solved before I march over the I-405 and start tossing Molotov cocktails through eFront's windows.

And now for a blazin' hot news update, from my desktop to yours. Families On Line forgets to filter out "Con Artists" from their approved web content:

In mid October, 2000 our company was approached with an opportunity to purchase and distribute the Sony® PlayStation2™ console. We were given absolute assurances that these units would be delivered by late November and hence we offered these units on our web site and the response was incredible. We received orders for in excess of 9,000 units. To date and despite numerous attempts, promises and stories, we have not received the units as represented. While we are trying every avenue to resolve this problem, as of this time we have been advised by Sony® that they do not have sufficient quantities to fill these orders. In furtherance of this most devastating situation we have already taken steps to involve the Fort Lauderdale Police Department Economic Crimes Unit and will further ask assistance from the Federal Trade Commission in dealing with the parties responsible for placing us and our loyal customers in this position.

Of course I can't help but wonder why the hell Families On Line was accepting preorders for Sony PlayStation2s in the first place. When I think of the PlayStation2, the following images come to my mind:

Games which require you to repeatedly punch other people in the face until either you or your opponent has decided their red life bar is too low to stand around and continue to be punched in the face anymore,

Something featuring either NBA players or armored tanks. 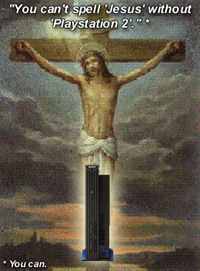 Notice that the topics of "Jesus" and "wholesome family fun" didn't appear anywhere in that brief list. Let's face it; the majority of console games are based around digitally mauling the schmuck sitting next to you or blowing something up. If, for some odd reason, the goal of the game isn't to destroy something, players often go out of their way to do so. Ever play Tony Hawk or its sequel, Prince of Persia? Sure they're fun and amusing games for the first 30 minutes or so, but you quickly reach a point where you get sick of legit skating and want to see ol' Tony grind his deformed skull against a steel pole. The only titles that could be even remotely considered as "family oriented" are all those psychotic Japanese puzzle / dancing games which appear to have been designed by somebody with easy access to the evil cube from "Hellraiser."

So why the hell was Families on Line, a site which quotes "Reverend" Billy Graham, letting people buy PS2s in advance anyway? What moral teachings or Christian values are being conveyed by Sony's console? The virtues of patience? The correct procedure to worship a God, as Sony fanatics have demonstrated by generally being raving morons and shelling out their life savings to purchase a game console? If you have any doubts as to the wholesome intentions of FoL, let me show you what topics they filter out from their webservice:

Yup, Families on Line is here to protect your children from the REAL danger out there: chain-smoking swimsuit models who post jokes on personal messageboards. However, while they do an excellent job defending our kids from those horrible online monstrosities, they also promote the abuse of far more dangerous things. Take a look at these games they have blatantly smeared across their site:

Caesars Palace 2000: Millennium Gold Edition - Is gambling suddenly a family value? How can the FoL include a link to purchase such an unholy product? What's next, Robert Downey Jr.'s Virtual Crackhouse?

Crazy Taxi - A title that rewards players for reckless driving? Since FoL believes children are easily influenced by almost every single negative media source in their life, I can't really imagine how they would justify this one. Maybe when their moron kid turns 16 and starting splattering the brains of preschool children all over his family's Station Wagon wheels, it's simply a kind and beautiful sacrifice he made to let the children get into Heaven quicker.

Flag to Flag - I don't know what this game is about but the word "flag" sounds disturbingly close to "fag", which is probably on the no-no list of topics for FoL.

To test out their comprehensive / terribly filtered out search engine (don't those two qualities negate themselves?), I decided to run a quick search on "Jesus" and "Playstation 2." Here are some of the more wholesome results:

Jesus Friends - "Jesus Friends", also known as "Chris", apparently enjoys his Playstation and "talking on ICQ." In addition, he has an animated gif of a bomb exploding, which undoubtedly promotes terrorism and violence. If that wasn't enough, and it most certainly is, his page also includes a guestbook (which is considered a message / bulletin board)! For shame, Families on Line!

South Park Rally N64 Cheat Codes - So now they're promoting both cheating AND the vile, anti-Christian cartoon "South Park"? Is nothing sacred?

BBSPot - Yes, number 30 on their search for "Jesus" and "Playstation 2" is none other than the tech parody / humor site, BBSpot. A quick look through their news topics will reveal not only a complete lack of family values, but in face the DIRECT OPPOSITE of family values... something I call "Family NOT Values!" Yes, that is a term I made up, and no, you can't use it.

In addition, searching for "something + awful", "Something Awful", "www.somethingawful.com", or "cock gagging granny" does not reveal a SINGLE entry for my site! After looking at all this concrete evidence and taking the special pills I take when I want all the ghosts to leave my brain and make me happy, I can only leap to the obvious conclusion: Jesus hates Families on Line. Their subpar search engine, in addition to their family NOT values game reviews, has forced the ol' J-man to sever all ties with such an abomination. As a result, some slick-talkin' shyster weaseled his way into the marbled hallways of FoL and swindled a bunch o' honest folk for hundreds of bucks each. It serves them right; sites like FoL are responsible for the Internet being the slum it is today. Good thing there are wholesome, family-oriented sites such as The Stile Project to make up for such decadence.

Something Awful would like to welcome its newest hosted site, the internationally famed world / fusion band, "Semi Automatic Turban." You may remember this band as being the link of the day a few weeks ago, and since then I have been negotiating nonstop to pull them over to SA's marvelous network of high-quality entertainment and hosted sites which don't seem able to spell many words correctly. It fills me with joy to finally have a music-based site on our staff since L-Bone is still in the hospital, recovering from a self-inflicted gunshot wound to the assbone.

BUT THAT'S NOT ALL! Not only is Semi Automatic Turban launching their site, but they have also released a BRAND NEW TRACK FOR DOWNLOAD! Yup, they have teamed up with Europe's most popular electronic musician, "DJ Mall DJ", to create the smash-hit dance single, "Barn Raisin' Un-Mercy"! If you like music and you own a computer, there's no good reason for you to not grab this red-hot mp3! Do yourself a favor and download it right now while you take a gander at the webpage of the band which will be taking America by storm, Semi Automatic Turban!

Jeff K. has completed the first part of his three-part mystery / adventure / action / romance comic entitled "Levelord Solves a Crime!!!" As you can guess, it's about Levelord. Solving a crime. I don't know what else I could say to make this seem any more appealing, so I'll just post a drawing of Levelord:

Check out the feature for yo'self.

eFront has informed me that my readers would probably enjoy purchasing various products which are coincidentally being sold through eFront. It's odd how these things work out! The products that I'm told you guys would love include:

The Survivor Board Game - I'm not sure why you guys would like this but hey, I'm not an advertising guy. I just write about stupid crap all day, so I'm sure there's a perfectly good reason why my audience would like playing a board game based off a bunch of idiots trapped on a filthy island.

Stay tuned as I continue to inform you throughout the week of products you unknowingly want to purchase.