If you're actually able to read this news update, you should consider yourself one lucky son of a bitch. You, much like the surviving cast members from "Silver Spoons", have beaten the odds. Ever since moving my site from Backbeat Media to eFront's servers, I've run into constant struggles to merely reach and view this site. At first the mysql server was hosed and the forums would die after a whopping uptime of three minutes. Then came the attack of the popup ads, where random people would face the eternal struggle of closing a new popup ad for EVERY page they loaded. After that we experienced (and still are experiencing) the assault of the never-loading ad server, which prohibits some people using IE to view this site. The ad server will never dish out the banner ad, and as a result, the page will just sit on a blank screen forever. I have no clue when this problem will be fixed.

If you're lucky enough to bypass all those problems, there's still the case of the mysterious crashing server, as the server SA is hosted on seems to crash faster than Delta Burke running across a Slip N' Slide. See, that last analogy I made was just utterly hilarious because Delta Burke is quite fat, and the mere idea of her jogging over a Slip N' Slide conjures up the most hilarious image of her falling down... and CRASHING! Not unlike the server, which slows down and / or crashes constantly! So you see, it's such utter hilarity that one can't help but chuckle at the grave misfortune I'm going through, causing me to yank out multiple clumps of hair from my own skull and rearrange them in a decorative fashion throughout my kitchen. Just stick with me, folks, it will all be over soon. I hope.

How bad is local television in southern California? Turn on your TV any time throughout the day, and you'll invariably get one of the following three things:

A "reality" show based around a cranky minority judge who hates every human being on Earth and wants to give the electric chair to the next 500 people who incessantly squabble about property lines or if the ring they gave their girlfriend was a gift or a loan.

Police chases. Apparently some drug-crazed fiends must love to watch this crap because they're on all the time. The solution to any problem in the Los Angeles area seems to revolve around evading the Police. Not that it matters if you get caught anyway, the officer busting you is probably under FBI surveillance for smuggling crack cocaine inside the rectal cavity of illegal Mexican immigrants. 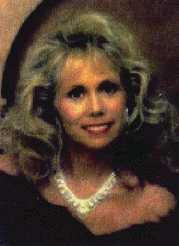 I have to thank Alex for pointing out this gem to me, because if I would've been unfortunate enough to actually turn on the television and stumble upon the show myself, my webcam would probably be caked with the interior ingredients of my own skull by now.

Sanchez: Now to a spy thriller unfolding in the heart of suburban Los Angeles. The CIA allegedly brainwashes a woman and turns her into a sex slave to the rich and famous.

Yes. You read that correctly. The CIA has brainwashed somebody into becoming a sex slave in suburban Los Angeles. The two questions that immediately sprung to my mind when reading this were:

1) Huh?
2) Why do they need to brainwash somebody when they can just drive into Santa Ana and pick up hundreds of sex slaves for 30 pesos total?

Obviously the CIA is bored off their collective asses, because l can't think of any other good reason for them to be brainwashing honest Los Angeleans for use as sex slaves. If they were a smart organization, they'd brainwash people and force them to work on the I-405 so maybe it'll stop looking like a gigantic freeze-frame video of bumper-to-bumper SUVs driven by tiny Asian women. Regardless, the KCOP "investigative report" chose not to focus on the CIA's motives for wanting sex slaves, and instead concentrated on the average life of a CIA sex slave. And oh, what a life it is.

Baskerville: Brice Taylor used to be your typical soccer mom, with a successful husband, three kids, and a beautiful home in the San Fernando Valley. That is, until she started telling of the secret double life as a mind-controlled sex slave for the CIA. Now, this onetime suburban housewife finds herself the unlikely leading lady in a real-life psychosexual spy thriller costarring a former Los Angeles FBI chief...
The former FBI chief: Brice Taylor is absolutely telling the truth. I would stake my name and reputation of 50 years on it.

Note that "The former FBI chief" doesn't really have a name to stake upon this. I guess if this story SOMEHOW turns out to be a hoax, he would ask his friends to stop calling him "The former FBI chief." I bet he has a bunch of other emergency backup names that he can rely on, like "Sparticus" or "George Washington." Here's another one I just thought of offhand: "Ted." If you decide to use that name, "The former FBI chief", make sure to notify me in advance so I may receive credit.

Taylor says Hope loaned her out to such luminaries as Henry Kissinger and every president after Eisenhower except for Carter and the elder Bush, whom Taylor calls a pedophile, accusing him of sleeping with her young daughter. Asked how she could corroborate these claims, she says, "I've identified a lot of penises. And I could also tell about the way that they preferred sex. Some of them are into really violent, kinky sex, and some of them acted like kids. Some of them were real passive, like Reagan."

It's good to know that Taylor at least brought back something useful from her experiences as a mind-controlled slut. Being able to identify penises is a skill that ranks up there with knowing nuclear missile 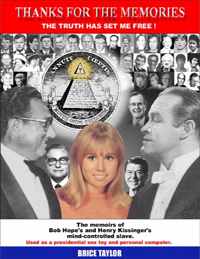 programming technology or how to convert flax into vegetable oil. Sometime in the near future, when we've evolved past DNA and retina-scanning services, the government will employ advanced dick-recognition technology to scan for potential terrorists.

If her long career seems remarkable, the 49-year-old Taylor explains that her mind-control masters were able to place her in a state of suspended growth, so that she did not begin to age at a normal rate again until she started the process of healing.

Well that's just a remarkable combination of mind-control techniques. First off, she's able to recognize penises from what I can only assume are miles away, and now she's aging at a slower rate than normal humans? Do you realize what this means? The CIA-trained dick recognizers will be ETERNAL. They will know your penis, your son's penis, and the penis of his son. They'll be a walking encyclopedia of sexual organs. When World War III is over and humanity lies in ruins, the penis people will probably be called on to rebuild humanity somehow. I'm not sure exactly how this would be accomplished, but it will probably be highly erotic.

Baskerville: And Brice says it turned her into a mindless "Stepford" wife, a programmed sex toy who could be triggered into action by the CIA with subliminal messages embedded in her brain.

Taylor: I was a human robot, who had no ability to think or question on my own. I could only follow commands.

Baskerville doesn't mention that Taylor believes she received her CIA instructions through subliminal messages in Disney films. Taylor claims that many CIA-controlled Americans receive messages through Warner Bros.' The Wizard of Oz.

Baskerville: We contacted three Los Angeles psychotherapists who treated Brice, but all of them refused to discuss her case, even with her permission. Pam Monday believes that's because they've already been threatened by the CIA.

I can't imagine why else they would refuse to talk to the television station, so it must be because of the CIA and their mind control / penis technology. Who in their right mind would refuse to carry on a conversation with somebody demanding to chat about how the CIA can brainwash ordinary people into sex-starved zombies that sleep with US Presidents and Bob Hope?

Baskerville: Brice Taylor wrote about her alleged life as a CIA sex slave in vivid detail in a new book out called Thanks for the Memories.

Aha. NOW the truth of the article finally comes out. Instead of just being a normal raving lunatic nutball, she's actually a normal raving lunatic nutball TRYING TO SELL HER CRAPPY BOOK. KCOP TV is, of course, more than happy to provide free advertising for her, since a story about CIA mind control undoubtedly gets better ratings than their usual "Dangerous Household Furniture, Part 9." If you're still not convinced this woman is 127% wacko, you can always read this interview of her on "Leading Edge News", which has conclusive proof of her nuttiness. You see, all wackos are born without the ability to correctly format HTML articles. They don't believe in page breaks, love making text either microscopic or huge, and enjoy running text together so it looks like one gigantic train wreck of ASCII characters. The proof is in the pudding, folks, and this pudding knows the size of your penis.

From: cliff yablonski
Subject: no subject, just an email

hey meatface, i've updated my wonderful site with 5 new pages of idiots I hate. link to it or I'll shove a fireplace poker into your fat gut.

PS: I'm getting rid of that idiot cat Uglycat.

You know what that means... five new pages of victims, ripe for the slaughter!

Bjørnar B. was kind enough to create two fantastic new drawings and a star-spangled essay for your enjoyment. Head on over and view the newest antics that crazy Donald Duck has gotten himself into, including another appearance of everybody's favorite character, "Fat Uncle Jubalon"!

Taco the Wonder Dog has a short animation entitled, "Small Child vs. Crushinator." Like always... I have no clue. No clue at all, but here it is.