Do you love the fantasy genre? Are you tired of laboring through hundreds of pages of world building and plot to get to your favorite parts, where characters eat, or think about eating, or look at food? Do you ever wish you could get right to the good stuff? 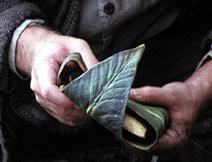 We've collected all the lengthy, repetitious descriptions of food from your favorite fantasy books. Unlike our competitors, we then took this collection and put it in a book!

Open up the Big Book Of Fantasy Novel Food Descriptions to any page, and you'll be delighted to find a rambling account of each morsel of food and sip of drink brought to life in nearly pornographic detail.

What collection of food descriptions would be complete without this passage from Robert Jordan's Wheel Of Time series?

Nyn stood at the head of the table and tugged at her braid in irritation, crumbs of delicious food falling free from her hair. Rand laid on his back on the table before her, his eyes wide and completely unfocused, his mouth mechanically opening as far as it would stretch then chomping as chunks of food from Nyn's braid sprinkled into the gaping maw.

At first there were simply morsels from Ghealdan spiced cakes. As Nyn continued to tug, however, the chunks became larger. Then came bites of kippered eel, strips of dried meat, whole glazed apples, and freshly backed spicy muffins with steaming pats of melting honey butter.

Soon the food transitioned to a stream of ever-changing liquids flowing forth from Nyn's braid. Plum brandy become spiced wine, which became a thick waterfall of honeyed porridge.

Rand's blank expression never changed, his mechanical movements taking in all of the delicious food which splattered across his face and clothes and it was all so yummy.

A Song Of Ice And Fire has received a lot of attention as of late, and with good reason. George R.R. Martin is a master of creating brutal and complex food descriptions.

Jon Snow approached the edge of The Wall. More than 700 feet below him, the foreboding and frosty home of the wildlings sprawled out to the ragged horizon.

For so long the phrase had been a motto of Winterfell an utterance between kindred folk in a harsh land. But now it seemed to be coming true.

Soon a new winter would fall upon Westeros, adding even more ice to the land before him. How delicious that ice would be if it were shaved into thin slices that dissolved on the tongue, flavored by a variety of berry juices.

There were all the berries he was familiar with, of course. But then there could also be exotic berry juice brought across the narrow sea, or even some crude berry pulp exported from the Dothraki by brave and swarthy traders.

Jon wondered about the fate of his kingdom, and how much ice he would be able to eat in whatever time he had left.

Of course, it's hard to imagine the landscape of fantasy food writing without J.R.R. Tolkein. His Lord Of The Rings trilogy was more about food than enjoyable literature.

The fires below awoke in anger, the red light blazed, and all the cavern was filled with a great glare and heat. Suddenly Sam saw Gollum's long hands draw upwards to his mouth; his white fangs gleamed, and then snapped as they bit. Frodo gave a cry, and there he was, fallen upon his knees at the chasm's edge. But Gollum, dancing like a mad thing, held aloft the ring, a finger still thrust within its circle. The severed finger was plump and meaty, just the right amount of fat to offset the digit's fibrous muscles. On the finger's skin glistened a sheen of sweat, a maddeningly delicious sauce seasoned by salt.

"Precious, precious, precious!" Gollum cried. "My Precious! O my Precious!" And with that, even as his eyes were lifted up to gloat on his prize, he stepped too far, toppled, wavered for a moment on the brink, and then with a shriek he fell. Out of the depths came his last wail Precious, and he took a bite of the finger and was gone.

Order now and you will receive two of our most popular companion books at no extra cost: The Big Book Of Fantasy Armor Descriptions and The Big Book Of Rape As A Fantasy Plot Device!