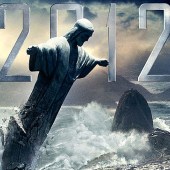 If there's one thing moviegoers will line up for time and time again, it is the chance to see humanity pay for its hubris in devastating ways. Well, maybe not humanity so much as humanity's coolest buildings and monuments.

In 2012, you can feel the camera jerk every time director Roland Emmerich tries to sidestep the territory he already smashed in The Day After Tomorrow, Godzilla and Independence Day. When you factor in all the landmarks that have been destroyed in Armageddon, Deep Impact, The Core, Cloverfield, Mars Attacks!, Garfield: A Tale Of Two Kitties, Volcano and Knowing, it becomes clear that filmmakers are running out of original ways to destroy iconic locales.

Being the helpful sort, I'll remedy the situation by spinning in place as quickly as possible (not in the shower this time, I've learned my lesson), then lay flat on my back and try not to think about how much more money the writers of the aforementioned movies made until I come up with a few ideas.

Two lovers share a candlelit dinner atop the Eiffel Tower. Just as they lean in to kiss, a five-mile wide asteroid streaks overhead at 36,000 miles per hour, the bottom of the enormous space rock brushing against the very tip of the tower.

During the resulting wobble, an uncapped marker is jostled out of the man's pocket. The couple look on in shock as the permanent marker tumbles along the face of the iconic structure, leaving a series of streaks that will never come out.

A tidal wave crosses mainland China and smashes against the entire length of the Great Wall, knocking countless picture frames to the ground and totally ruining some very tasteful wallpaper.

An earthquake, no, a megaquake devastates the Grand Canyon. The seismic event (of the summer, as it will read on the movie's poster) does not have an epicenter like normal earthquakes. It has a megacenter, and that is squarely in the middle of the canyon's majestic expanse. The unprecedented event rips the very ground apart, leaving several large fissures that totally ruin the landmark.

Global warming makes the Egyptian pyramids explode in gigantic fireballs. An American tourist in the process of snapping a photograph looks at the camera in his hands with a comic expression, then tosses it over his shoulder.

The world's tallest man is buffeted by the vicious winds of the world's first recorded gigatornado, and he is thrown clear across the room.

A beam of energy blasts Mount Rushmore, pulverizing the rock into dust. Where the skull cavity of each sculpture once stood, we now see the actual forms of the presidents, suspended in stasis fields. A second beam of energy blasts the four figures, and they too are pulverized into tiny rocks.

As scores of black holes appear within the Earth's atmosphere, someone asks a Londoner for the time. Horror sets in when the man turns to regard Big Ben (as all British people do when they need the time) and realizes that it is missing. 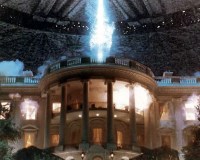 Relief washes over his face when he realizes that the landmark is still there, he's just not able to see it because a black hole is blocking it.

A giant bull emerges from the San Francisco Bay and sets its irradiated sights on the Golden Gate Bridge's trademark red paintjob.

When the Earth's supply of oxygen completely runs out, catching absolutely everyone by surprise, a man collapses at the wheel and dents the outer wall of the Sydney Opera House.

A gigavolcano is discovered by a construction crew (one of them is a vulcanologist whose theories were so groundbreaking that he was forced out of the scientific community) in the process of renovating the basement of the Washington Monument.

Unfortunately, their efforts to pad the ground with hundreds of layers of paper towels come far too late. The volcano erupts, sending so much molten magma through the top of the monument that people can see it from up to three blocks away.

The largest solar flare ever recorded instantly vaporizes every drop of water in the Venice canal, confirming suspicions that canals are basically just streets with water.