Fetishes of the Future

I'm just kidding. Seriously, that story is done. My days whoring it out are over. I swear I'll never mention it again.

Fetishes of the Future

Something Awful has been around almost as long as the internet itself. In that time, we've taken a look at a wide array of sexual fetishes ranging from the unnerving to the truly horrifying to the baffling. We've met people who pop a proverbial, which is to say, literal stiffy over fat women, giant women, Lord of the Rings characters having gay sex, dead people, unconscious people, sick people, retarded people, kids, old people, midgets, robots, plants, animals, furries, plushies, fat furries, furries with fifty-foot penises, furries who eat each other, furries with multiple heads, people swelling up like balloons, statues, paralyzed people, paraplegics, amputees, Ubangi lip discs, scat, people wetting themselves, cannibals, being eaten by cannibals, little plastic army figure porn, Lego porn, women whose cars break down, anime characters having gay or incestuous sex, comic strip characters having gay or incestuous sex, and much, much more. Hell, if you scroll down to today's Awful Link, you can read about a site for people who find enormous noses sexy. Some of these fetishes were publicly acknowledged before the invention of the internet. Others are so bizarre that I can only imagine they would have never taken shape if not for the internet's amazing ability to give complete freaks and societal rejects a sense of community.

No rational person could possibly predict that a fetish about, say, women trying to get their cars started would ever emerge, let alone develop enough of a following to necessitate the production and sale of movies on VHS and DVD. Nor could anyone predict that there would actually be people - as in more than one person - who actually fantasize about being killed and eaten by a cannibal, but lo and behold, it's the latest rage in Germany. That's right, Germany! Not Japan! I know, I can hardly believe it, either! I don't know what we did to these two countries when we spanked them so heartily in World War II, but their cultures have gotten severely messed up. The point is, no one can actually hope to understand the depths of human fucked-upedness enough to predict the next deeply disturbing fetish to take Yahoo Groups, and then the internet at large by storm without being pretty severely fucked up themselves. But that's just what I'm going to try to do. Ladies and gentlemen, I present for your enjoyment my guesses as to the dark and deviant nature of a few of the fetishes we will soon see floating around the internet. Before we begin, allow me to make one note: this article is intended only for (mildly) comedic purposes. Nevertheless, I fully expect that at least a couple of these fetishes will actually emerge sometime in the near future, if they aren't fetishes already. 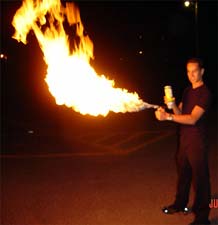 The heat of passion and the friction of two bodies intertwined just isn't hot enough for the flamies. These enthusiastic, but unquestionably stupid individuals just can't get excited about sex unless things are hot, hot, hot. That's why they obsess over the act of sex between two or more people who are actively on fire. The flamies find nothing more erotic than the combined stench of sweat, sex, and burning flesh and hair. Whether it's a lit match tossed into the pubic hair or a liberal dousing of gasoline all over the body, the flamies need that fire to fuel the fire in their loins. You know, the one that isn't scabies. Due to the nature of the fetish, flamie sex is usually very short in duration, and is more often than not a one-time indulgence, since even in the instances where the participants survive, their genitals are typically charred beyond recognition.

The flamies have spawned an offshoot called "combusties," who fantasize about having their partner spontaneously combust, or about spontaneously combusting themselves, during the sex act. Due to the rare and unpredictable occurrence of actual spontaneous human combustion, this branch of the fetish is less commonly practiced, although websites that cater to it do offer a variety of poor quality videos featuring lame special effects that attempt to represent this odd and thoroughly moronic fantasy. Naturally, the fetish is also accompanied by plenty of bad art and erotic slash fiction featuring Goku spontaneously combusting while attempting to go Super Saiyan while having gay sex with Vegeta.

Note: The flamies should not be confused with "flamers" who are defined as regular readers of Fark.com. 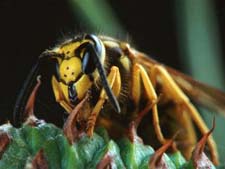 When one daring young man published a short story on his Geocities site about a boy who trips while out jogging one hot summer's day and lands with his crotch on top of a bustling anthill, he inadvertently gave an entire hidden subculture the courage to make themselves known. This group quickly dubbed themselves "crawlies" and banded together around the common fetish of having thousands upon thousands of tiny biting, stinging insects swarm all over and inside their genitalia. One of the more vocal of the new wave fetishes, many practitioners make appearances on Maury Povich, Jenny Jones, and Jerry Springer. With the male fetishists making such comments as "You don't know how good it feels to have a hundred thousand tiny little feet massaging your cock," and the females sharing stories of finding the crunchy corpses of dead wasps inside their vaginas, talk show audiences everywhere are thrown into chaotic hooting, hollering, chair-throwing, and vomiting. This fetish is singlehandedly responsible for the emergence of seven previously unheard of sexually transmitted diseases, and school sexual education programs begin to include the lesson, "When you insert a fire ant into your urethra, you're inserting every urethra that fire ant has ever been in." Naturally, the fetish is also accompanied by plenty of bad art and erotic slash fiction featuring Goku dumping a jar of spiders onto his scrotum while having gay sex with Trunks.

Note: I couldn't find a good place to insert it into the above paragraph, but I want you all to know that I came up with the joke "this gives new meaning to the word 'cockroach,'" which is really fucking funny. 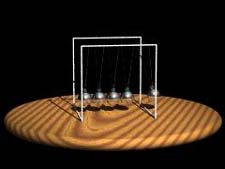 The complicated, difficult, and largely painful act known as pendulum sex has a small but dedicated cabal of followers. The concept is simple: two people attach themselves to long tethers fastened to a pole suspended some fifty-plus feet off the ground. They then climb up ladders spaced out a good distance from each other. Both people leap off at the same time and swing toward each other, attempting penetration upon impact. The catch, beyond the geometric precision needed in orchestrating such a perfectly executed collision, is that from the heights and distances that most practitioners attempt this feat, they have to get it right on the first swing, because the initial impact is going to break several bones in both participants. To that end, the male attempting penetration actually has to work himself up the the point of orgasm by hand before leaping, then maintain the erection while swinging through the air until he can sink his stiffy deep into his fast-moving partner and deposit his seed. Of course, should the male miss his mark by even a little, he will end up either crushing his erection into a pulp against the other person's body, or,in the case of particularly strong erections, stabbing a hole in his partner. Come to think of it, that's not that simple at all, really. In addition to a high mortality rate, this fetish is naturally also accompanied by plenty of bad art and erotic slash fiction featuring Goku swinging like a pendulum while attempting to have gay sex with Krillin.

These abnormal and clearly disturbed individuals have an unquenchable obsession with calm, relaxed, straightforward missionary sex between a man and a woman. They don't believe in having sex in exotic locations, with body parts not normally thought of as sexual, or using any sort of tools or outside objects. Naturally, they are considered to be freaks of the highest caliber and universally reviled and shunned by practitioners of every other fetish. Freakies are forced to keep their hidden desires private, lest they face overwhelming amounts of extreme ridicule and discrimination. Fearing for their safety, they scarcely create webpages about their sick fetish at all, instead hiding their sex lives behind a veil of leading actual lives. This fetish is also accompanied by plenty of bad art, but poor Goku must wank alone.

These are just a few of the revolting sexual practices that will emerge in the future. Just remember, if you found anything in any of the preceding paragraphs to be the least bit arousing, then you're part of the problem. Perhaps you should consider creating a badly designed and largely incoherent website about it. Be sure to give Goku something to do.

Look At Me Ma! I Done Birthed Me 'Ah Baby!

Hello internet friends, Zachary "Poke Her Jeans" Gutierrez here. When I was young I dreamed of having a family. Every day I would think of how wonderful it would be to have dinners with my loved ones, argue with my wife on how to best discipline the children, and teach my boy how to play ball. After today's Weekend Web my dreams have been shattered.

What makes today's feature so much worse than others is that these people are supposed to be raising the future of this world. I'll bet you a hundred bucks that these kids end up on a Weekend Web update twenty years from now asking for help on how to best pee on a pregnancy test stick. Oh boy! I can't wait to be a parent! I hope you enjoy today's feature. Thank you for making Something Awful your source for images of forum posts from other internet forums.