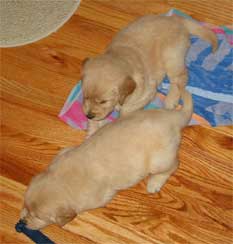 Polly and Speedy at the age of five weeks. Please note that they resemble furry slugs.

In my last thrilling Dogpile update, I introduced my two newest pets to the world, a couple of spunky Golden Retrievers named "Speedy" and "Polly," who took the place of my dearly departed homosexual watersport-loving dog "Jake" after he died of some mysterious alien spore disease that I personally blame on the Mars probes. I mistakenly referred to "Polly" as "Fatty" in that update, mostly because she was fat at the time, but she has grown lengthwise and filled out nicely since that dark period of her life. You see, all creatures are born with 500% of their body's total mass located in their foreheads. Childbirth is such a painful procedure due to this reason; nothing hurts more than squeezing some bloated kid out of your constricted love tunnel and realizing that you just gave birth to a moist, bulbous, ugly shrieking skull with a couple flailing arms attached to the sides. This is why I refuse to ever personally give birth to anything that won't come out of my ass and isn't the direct result of consuming vast amounts of Mexican food.

My two cats, "Cat" and "Stupid," have adapted well to the puppies if you consider their failure to run into the street and willingly get run over by a car to indicate a positive response. Cat stays upstairs in his secret sanctuary, an area of the house where the dogs are not permitted to travel because I refuse to give them the necessary passport and paperwork. This palace of protection is usually located in the deep, dark recesses of my closet, so far back that I believe its technically located in the Atlantic Ocean. He'll emerge from the shadows once every full moon so he can eat cat food, drink water, and use his evil hypnotic eyes to gaze into my soul for hours on end. One time he started staring at me and I suddenly began feeling sleepy. The next thing I knew, it was over three hours later and I found myself covered with human blood, laying in a drainage ditch off Chipman Road. Oddly enough, I have never seen Cat as happy as he appeared to be that night, and also nobody has ever discovered what happened to the fat grey enemy cat who lived across the street, the one who was always strutting around like he owned the neighborhood.

Stupid has developed an intimate bond with Polly and Speedy, a bond forged from them repeatedly attempting to swallow his head in their drooling, cavernous mouths. He'll occasionally trot on downstairs to the Floor of the Damned and greet the puppies by walking within a 20-mile radius of them. This is enough to activate their patented puppy "slobber radars," causing the dynamic duo to sprint in Stupid's general direction at a speed much greater than Mach 4. Once he is within visual contact, the dogs will pull their handbrakes and attempt to come to a screeching halt, but since the floor downstairs is varnished wood, they'll skid a good 40 yards before coming to a complete stop, usually at the expense of sliding head-first into the front door. Then they turn around and greet Stupid by extending the universally accepted sign of friendship, the attempt to swallow his head. Stupid, who is stupid, naturally never expects this shocking event to occur because despite the fact that it happens five times a day to him, he still harbors a deep intense hope that the dogs will one day decide to stop swallowing his head and instead welcome him with an assorted bouquet of beautiful flowers and candies. Then they will whisk him off to a romantic vacation in Hawaii or Cancun, whichever offers better airline fares at the time. Unfortunately this day has not yet arrived, so Stupid is given nothing but a dripping wet skull and an aromatic blend of exotic smells which strangely reek of whatever dead animal parts the dogs were previously gnawing on in the back yard. 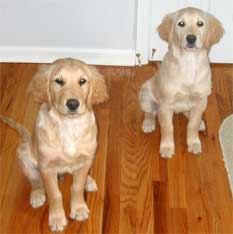 Polly and Speedy at the age of five months (Speedy is on the left). If you squint really hard, you can see Speedy's doggie penis below him, you sicko.

Speedy and Polly have participated in a number of exciting puppy secret missions during their five months of existence here. While I have only found indeterminate, unrecognizable scraps from most of their previous accomplishments, I am aware of a few operations they recently completed, and I would like to share them with you in the hopes that you'll write me angry emails full of very naughty words, all of which revolve around the central theme that you don't give a horse's ass about my dogs and you sincerely hope I contract a fatal disease from a marauding homosexual rapist who is probably my father.

I decided to cover Operation Anal Blast first because out of all the wonderful activities Polly and Speedy have participated in, this was definitely my least favorite. In fact, I can remember a wide array of painful sports-related injuries I have suffered which I would consider more pleasant than Operation Anal Blast. It was a normal, average day in the Rich "Lowtax" Kyanka household; I was upstairs sending AIM messages to QTGurl69HunnieBarbie, the cats were squatting under my bed plotting my demise, and the puppies were in the kitchen attempting to locate any errant food atoms which they may have mistakenly overlooked during dinner three weeks before. Suddenly my nose detected something foul, causing my brow to furrow despite the fact that I have absolutely no idea how to furrow anything, much less my brow. I twisted my head to either side, attempting to immediately locate and identify the horrible stench. There was nothing in my office causing the disturbance, so I plodded into the main hallway and looked around. I couldn't find anything there either, but my olfactory sense indicated that I was successfully approaching the apex of this abominable aroma, like a twisted Easter Egg hunt where all the eggs have been replaced with rapidly decomposing goose carcasses stuffed with industrial waste. I was not prepared for what I discovered upon walking into the living room, and this is coming from somebody who has seen their fair share of dead hookers in their lifetime.

There, squatting in the carpeted "forbidden zone" of my living room, was Polly the Lovable and Cute Golden Retriever. Directly below and in front of her was Brown Stain, the Disgusting and Vomit-Inducing Congealed Mass of Diarrhea. I'm assuming that Polly was responsible for this colorful addition to my carpet since she was the only creature in there, and her eyes seemed to hold some deep sense of pride for her bowel projecting accomplishment. Even Speedy, a dog who once ate an entire chair leg, refused to step into the living room now that it was occupied by Assblaster the Unfriendly Ghost. Now this horrible stain wasn't like any other stain in the history of the universe; it possessed some magical staying power which granted it the ability to travel through time and infect both the past and future with its atrocious odor. No matter how many highly toxic cleaning substances I dumped on the stain and regardless of the countless hours I spent massaging chemicals into its discolored body, the brown beast refused to leave my happy home. After roughly a day of steam cleaning and applying odor-removant spraying applications, the brown tint began to fade but the stench adamantly refused to depart. I eventually gave up and called a priest to come over and exorcise the demonic spirits. His corpse can still be found in the front hall where I refuse to move it on the grounds that I am lazy. 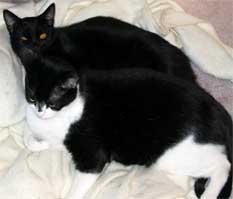 Stupid and Cat are not amused.

My mother purchased a very fancy lawnchair for me roughly two years ago. It had a dark green metal base and a fairly comfortable cushioned body which would've made it an absolutely wonderful piece of relaxing outdoor furniture if it wasn't for the fact that no human being could actually sit on it. There was something odd with the design so when you put your ass on it, the bottom folded up and the top folded down, transforming you into the meat inside a lawnchair taco. I'm fairly sure my mother never attempted to relax in the chair because if she did then she would've never held the lawnchair with such high regards. She would personally check on the chair every time she visited my house or apartment, as if it was her long lost grandson who I cruelly imprisoned on the deck as some unjust punishment for murdering my wife.

When I moved from my apartment to a house, I placed this lawnchair out on my porch, the same porch that the dogs would flock into whenever they got done staring at the grass in my backyard. Little did I know that each time they headed into the porch they were completing various mini-goals in Project Lawnchair, all leading up to the end result I witnessed upon walking in there one day last week. The entire chair had been completely dismantled, the foam stuffing littering the floor like pieces of Dale Earnhardt's car in the Daytona 500. I'm fairly confident that one of them managed to forge crude tools and used them to successfully dismantle the metal frame because I can think of no other explanation as to how they took it totally apart. The chair is currently sitting on my back porch, covered with ice and dirt, serving as a deadly notice to any burglars that if they date attempt to break into my house, the ever diligent Speedy and Polly will immediately lunge at him and savagely attack any nearby lawnchairs they may have brought in with them.

There are a few other exciting and action-packed missions the puppies have embarked upon, but since people write in to complain that my updates are too long and constantly terrible, I shall save them for another day. I'm sure everybody will be patiently waiting for and anticipating this glorious event much like how Stupid continually hopes and prays for the chance that he'll walk downstairs and won't immediately have his head swallowed by two dopey-eyed puppies who took a break from eating their own vomit to begin eating his skull. Oh the joys of pet ownership!

If zero times any number didn’t equal zero I would say that this part lasts about a thousand times longer than it should. After the vaginal and rectal temperatures have been taken, the greasy editor begins laying waste to the unshaven morass of the intern’s vagina. Japanese women, please take some hints from much of Louisiana and Florida; they drained the fucking swamps for a reason. Sweaty, sticky, and tangled clumps of black pubic hair are so inviting you might as well leave a trail of skeletons leading to your vagina. This scene ends with yet another “blast and drool”, a tradition dating back to 9th century Japanese rice-paper and calligraphy porn.