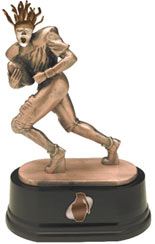 It's time to roll out the red carpet, because I think award shows are one of the big things that separates us from the rest of the animals. The only problem is they only celebrate things that are generally thought of as "good" (aside from the CMA awards) and most people seem to have had enough of that lovey garbage. The Internet is full of real people with real people appearances, why can't they win something for once? I'm no Fabio, I'm sure you probably aren't either (unless you are Fabio, in which case: Hi Fabio), and I know for a fact that the Something Awful forum goons aren't the prettiest forks in the drawer themselves, so rather than showering some two-bit airhead floozy in a bikini and lip gloss with praise, we decided we should forget about Evan "Pantsfish" Wade for one day and hold a different contest. A better contest! A new contest!

Remember in Beetlejuice how all the ghosts were horribly ugly and deformed but they all got along? The Internet is just like Beetlejuice in that respect, and also in how bad things tend to happen when you talk about the Internet out loud. Like you could be on the bus talking about your computer and the third time you say "internet" some pale dude with worms coming out of his scalp pops up from the seat behind you talking about marrying some girl he barely knows. We can discuss this later though, because it's time for the First And Probably Only Annual Something Awful Forums Medusie Awards!

Monday morning we asked the bravest of the ugly goons to step forward for the chance to win actual real life cash and prizes. Here are the results!

According to popular legend, Jeshe was abandoned by his parents and raised by a pack of "Wild Ranch" flavored pork rinds. Found by humans sometime in the mid 1990's, he now sleeps on a pillow made of solidified bacon grease and is able to turn any normal human bed into a slip-n-slide within minutes. The uneasy look on his face was due to the incredible rush required to snap this picture before his paper nametag turned clear for the fourth time in a row.

His adaptation into human society has not been an easy one. Not for a single large reason, but for many little ones. For example, Jeshe is entirely unable to grip most doorknobs. The only ones he can successfully operate are the big clear plastic ones shaped like enormous diamonds, as they provide a suitable grip for his slug-like appendages.

Now when someone says, "Hey, you know that guy that looks like a drunk Bob Saget suffering from radiation poisoning in a funhouse mirror?" you can say, "Yeah, kinda! That's our pal Jeshe!"

Whoa, did somebody's rib cage just eat a lemon? Nope, that's Olewithmilk and he's our first runner-up in the First Annual Something Awful Forums Medusie Awards! Laugh all you want, but do YOU have a built-in place to hold your M&Ms while you lay down? What about a place to catch rainfall when you're stuck on a desert island? Aside from your gross little belly button? Nope, didn't think so! This goon is stylish and practical while getting the job done. Like one of those cars. With cupholders.

How did this happen, you ask? Nobody's quite sure, but our best guess is his mother walked into the corner of a table while he was still all mushy up in the womb.

For Olewithmilk's bravery, probable inner beauty, and mondo ickytude, he has been awarded a highly respectable second place.

And now, taking home the 2006 Medusie -- the ugliest Something Awful forum member we could find...

That's right, the only forum member who was previously frozen for several millennia, the being who is thought to be in at least partial control of weather patterns, and the man who is lauded as well as feared around the forums for his terrible temper toward all things summer and / or fun. It's been said that if he crosses your path at the same time thunder claps, you're already dead. We don't have any way to confirm that because everyone it's happened to has either died before they could tell us, or it's just never happened at all.

Big ups to everyone who took part this year, next year will be a lot larger and more elaborate, with music and video and girls. There will be girls next time! Girls, girls, girls! Beetlejuice loved those girls!

I almost forgot! For our winner and his well-wishers, a piece of memorabilia: A collectible desktop wallpaper for you to keep until you die. It gloriously depicts the victor on a fashionable filmstrip. Why the filmstrip? Because he's a star! 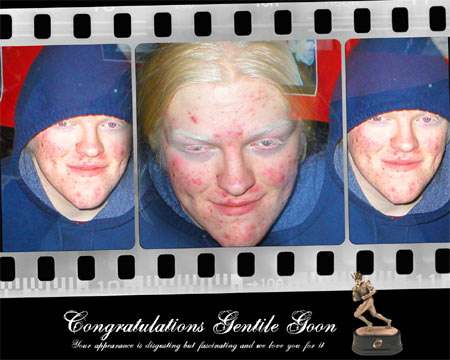