If you're like me, and I know I am, you're undoubtedly worried about the future of America. With the rise in popularity of "The Jerry Springer Show", the terrible decline in quality of "The Simpsons", and the fact that our biggest export is Britney Spears CDs, I was starting to lose hope for this big mess of dirt and warehouses we call "The United States of America."

That outlook has recently gotten even worse with the announcement of the voting mayhem in Florida. According to many news sources which are infinitely more reliable than this site, the combined intelligence in the entire state of Florida seems to rival popular brands of toilet brushes. Now before any native Floridians get angry and start composing flame messages to me, let me add this disclaimer: I'm not talking about you. I'm talking about the following groups: 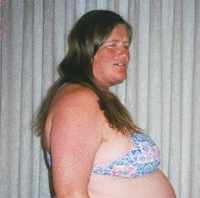 The complaining members of Volusia, Broward, Dade, and Palm Beach county, who claim the ballot design was "confusing." Folks, if you can't figure out a voting ballot, you shouldn't be allowed to vote. You should be taken into custody by the US government so they can test out dangerous new experimental drugs on you. Especially fascinating is Lillian Gaines, who had the nerve to say the following:

"I went to the polls for one specific reason, to vote for Gore. I hit the second hole. I am sure I did. What was going on in my mind was somehow my right to vote had been taken away from me."

What is going through my mind is that I'm astonished she was able to drive all the way to the voting booth without getting lost and falling into a swamp or a black hole. The voting process is not that complicated, Mrs. Gaines. In fact, it's a remarkably easy process:

1) Decide who you want to vote for,
2) Punch the hole next to their name.

That's it! If you want, ask one of your more "computer savvy" friends to print out these instructions and then read them aloud to you next time you go to vote. Just for kicks, let me hold a quick quiz to see if you were able to absorb this knowledge.

QUESTION: You want to vote for Al Gore. Which name should you punch the hole next to?

The answer, by the way, was "A) Al Gore". Next time I'll be quizzing you on the correct process to boil water (HINT: water is involved!).

Democrats making a huge stink out of the event. It's obvious that this is a close call, and they sure as hell don't want Bush Jr. to win. For all intents and purposes, I don't blame them. If I had invested as much time, energy, and cash into the elections as they have, I would do the same thing. However, it's just obnoxious to see people wanting to stretch this process out as long as possible. Among other reasons, Democrats are complaining Florida needs a revote because:

The ballot was "faulty", not unlike Firestone Tires or those Pokemon balls from Burger King that idiot kids were choking on a while back.

Not enough votes were counted.

Too many votes were counted.

Black people were detained and prohibited from voting by marauding, rampaging white conservative Policemen who took a break from their busy schedule of burning crosses.

Ralph Nader is a stupid little man who ruined their clever scheme, and they would've gotten away with it too, if it wasn't for those pesky kids.

Republicans threatening to demand a recount in Iowa and Wisconsin. Yeah, fight fire with fire, boys! In fact, let's hold the entire damn election over again! Even better, let's hold the PAST FORTY elections over again! Let's get Chester A. Arthur out of his rotting grave and into the Oval Office where he belongs!

So, in conclusion, I really don't give a crud who becomes the president at this point. Each candidate has their own pros and cons:

George Bush PROS: I might get a tax break, people will start being executed and bombed left and right, he'll undoubtedly provide pages of unintentional entertainment for this site.
George Bush CONS: Smog will get so bad that I'll have to use special Crusoe-powered goggles to see my computer, Jesse Jackson will be on CNN all day whining about God knows what, the US will probably end up going to war with various 10th rate countries that have names ending with "-guria".

Before anybody starts composing me email criticizing my assessment of the potential presidents, let me remind you that I make sweeping generalizations and untrue statements not because I'm ignorant, but because I simply don't care. Hooray!

Wow, a game review? On Something Awful? I didn't think it was possible either, ladies and gents, but here it is: a review of BattlePets, one of the most stupid games I have ever had the displeasure of playing. This game is supposed to be "like Pokemon", only it succeeds in failing on so many awful levels. I really don't like this game at all, and if it wasn't for the laughably terrible monsters you're supposed to capture, it would have no redeeming qualities whatsoever.

Yes. It's that bad. BattlePets proudly features deadly attacking sperm, mutant grey rabbits that sit on pin cushions, fighting condoms, floating Jolly Ranchers, and Oriental attack kites. Nintendo foolishly opted to go with fictional creatures that look cute, cuddly, and easily advertisable, but not Aggressive Game Design! Oh no, they chose to display only the most vile and horrific of creatures in their star-studded tribute to dementia, BattlePets.

Yes, it's that bad. If you don't believe me, choke on this:

Yeah... sure. Read the review and be shocked and amazed. Well, just shocked.

Cranky Steve's Haunted Whorehouse has updated again, marking the 6034029th consecutive day it's been updated. Today's treat is a Quake 2 nightmare entitled "Wolf3DQII", which doesn't look like Wolf 3D at all... or Quake 2 for that matter.

It certainly doesn't resemble any Wolf or DOOM2 / Wolf level I have ever seen except in the most superficial of manners, the most notable being the areas saturated with the deep musky "fuck-me-Smurf" blue. It sort of makes the walls resemble the good old Wolfie blue brick textures, but how does that explain the areas saturated with the pizza grease vomit neon red or the bad acid trip glowing urine-yellow sections? The majority of the file size of the map is simply gobs and gobs of colored light entities; one room is so entirely bathed in neon red that it gives the impression of being stuck in a toaster oven set on "broil." Something tells me that if the author had simply lit the map with plain stupid, boring, old "real-world" white light, I might actually dismiss its elementary school simplistic design, stultifying claustrophobic atmosphere, and random item placement as just another dumb little fast-frag deathmatch level. But nooooo!

More mapping goodness than you can shake a mapmaking stick at!

Great offsite reading: X-Entertainment's latest review of "The Masters of the Universe Chronicles: Episode VI" is simply hilarious. If you're old enough to remember He-Man, don't miss this one.

The winner of the IBM Developer Works Harddrive Giveaway Contest is DAVE VEDDER, who correctly guessed... well, I forgot what he guessed. I just picked a name at random from all the contest entries, and he won. To everybody else who lost: you are a failure and your family hates you. If you're interested in winning more free stuff, make sure to check out the Developer Works page! They give away tons of free crap all the time!