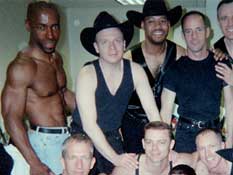 Didn't you want to grow up to be a cowboy just like these rough and tumble ranchhands? Okay, maybe not EXACTLY like them, but along the same lines. Okay, not at all.

Ever since I was a kid, I constantly knew I wanted to eventually grow up and become an adult who was no longer a kid anymore. Beyond that however, I had no idea what I wanted to do for a living. As children, our hopes and dreams change as quickly as commercials for soldier figurines that are marked "some assembly required" and include 50,000 accessories which are promptly sucked into another dimension the instant we tear open their plastic packaging. Now as all of you out there in Internet-land are undoubtedly well aware of, I am diametrically opposed to making sweeping generalizations, as doing so causes me to receive hundreds of thousands of emails from flight-sim addicted homosexual furries. No matter what sweeping generalization I make about what group of people, I end up getting flame mail from flight-sim addicted homosexual furries. I'm beginning to think that the Internet is simply a breeding swamp for anus-licking humanoid foxes who want to fly jet planes, which is of course a stupid notion because I know for a fact the Internet also attracts pasty-white goth high school kids who write poetry about carving pentagrams into the skull of their algebra teachers. Regardless, I can safely proclaim that every single one of us was utterly retarded as a kid. The entire purpose of being a child is to do all the stupid things that we can't get away with as adults, such as lick streets signs, feign ignorance after using racial slurs, or engage in underage drinking. When's the last time you've seen anybody over the age of 21 get caught for underage drinking? I sure as hell can't remember the last time, but then again I masturbate to coupons for cake mix so my opinion can probably be disregarded.

To continue with the subject at hand, which I really don't recall, childhood instills us with the dopey notion that we can be anything we want to as long as we brush our teeth and put on clean underwear before getting run over by a tractor trailer. Eventually we mature and wise up to the notion that only .0000001% of us are going to be the president, a spy, or astronaut. The rest of us have to settle for being president of the West Pointsburgh Botanical Society, a spy who spies quick glances of other men's penises in public restrooms, or, uh, an astronaut who floats around in the weightlessness of a garbage dumpster infested with rats and copies of "Shaq Steel." To tell the truth, I really had grand ambitions for this analogy but none of them materialized, and for that I apologize. While this may seem like a dreary and depressing update, I am proud to announce that the illusions of futility were recently eradicated from my existence by discovering a certain gem that proves we, as giant bags of red goo trapped inside some fleshy skin-like substance, can become anything we want to be.

Actual vidcap from "Lord of the Rings."

Many of you may know Peter Jackson as the guy who made that goofy movie about elves or jewelry or hobbits or whatever, that silly "Lord of the Rings" film. While I personally have not seen "Lord of the Rings," I have impersonally watched it by viewing a 10-second ad and then basing my entire judgment upon the fact that it contains characters that can be seen in Dungeons and Dragons games, therefore discrediting the film and putting it on the same league as Tom Hanks' "Mazes and Monsters." This, ladies and gentlemen, is not a league you want to be in. If the XFL was still around, it would be the equivalent of their minor league farm team, also known as "being on parole" I guess. Most all movies that feature orcs, gold coins, or magic weapons fall into this horrible category. Whenever I'm too lazy to propel my fat ass out of my chair so I can see a movie and actually gain some insight into what the hell I'm writing about, I simply ask myself the following question:

"Does this movie look like any of the scenes were determined by rolling 20-sided dice?"

If the answer is "yes" then I personally go out of my way to avoid the film. Hell, if the answer is "no," I usually end up avoiding the film as well since the last two movies I saw in theaters were "AI" and "Gone in 60 Seconds," films which were easily eclipsed by the raw entertainment value of the popcorn I ate during the screening. Now while "Lord of the Rings" has earned approximately 100 jillion billion zillion dollars and cured cancer and colonized Mars, I don't believe "Bad Taste" had quite the same effect. As far as I can tell, the only effect "Bad Taste" had was to bolster the tourism revenues of every country which was not New Zealand, the location where the movie took place. 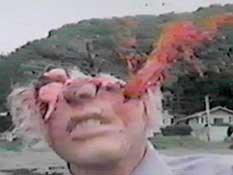 "Bad Taste" is one of those movies that causes a small band of raving lunatics to absolutely positively NEVER EVER SHUT UP or cease lathering praise upon it. They'll hammer you over and over with references to the movie, descriptions of the movie, and comparisons of the movie until you either succumb to their wishes and watch the movie or commit suicide by jamming an envelope opener into your ear canal. Death is usually a more preferable option, although the path to hell is paved with fat movie geeks who recite lines from "Hackers." Naturally this film is one of those movies that cause us quasi-normal human-type people to sit through it and wonder "so what?" Yes, there is a lot of blood and guts in the movie. Yes, the characters are quirky because they have accents and wear scarves and choose not to act when they probably should. But what causes sub-mediocre crapfests like this to become cult classics? Is it simply that the Internet allows anybody anywhere to instantly locate people of equal interests, spare time, and idiocy? More importantly, how the hell can any human go from "Bad Taste," which grossed $28 and two bus tokens, to "Lord of the Rings," a movie which is so popular that scientists are currently trying to figure out how to beam the movie to neighboring star systems?

"Bad Taste" is the eternal tale of aliens (bad guys) who want to kill us (humans (good guys (bad actors))). Each scene is simply a vehicle to show off a new prop weapon or special effect that the director created while combining Play-Dough and strawberry jam. Man runs from location to location, killing aliens. Aliens run from location to location, killing man. Audience runs from location to location, fleeing from the movie. Repeat for roughly 400,000 minutes and bam, you've got yourself a cult film. This movie isn't bad in an entertaining "Evil Dead 2" or "Feeders 2" kind of way, it's simply bad in a "pregnant wife and Pope killed in automobile accident" kind of way. And no, the wife was not pregnant with the Pope's baby.

However, as much as I'd like to point out the infinite ways which "Bad Taste" disappointed me, ways which barely outnumber the quantity of times space nerd Wil Wheaton is mentioned daily on Fark, it just goes to show you that there is hope in life. One minute we could be a down-and-out janitor mopping the bathroom of an Arby's, and the next minute we could be awarded $500,000 for choking on a Lincoln Log that somehow found its way into a Big Roast Beef sandwich. Just as Peter Jackson went from the idiotic "Bad Taste" to the pop sensation "Lord of the Rings" trilogy, we too can stumble upon a success story that revolves around us filming midgets holding swords. Dream on, children of Earth, as nothing in our lives is impossible, even meeting a talking cat that somehow solves mysteries! One day you too may reach your childhood dream of becoming an unemployed flight-sim addicted gay furry who spends all their free time accusing me of not accepting various deviant lifestyles that justify jacking off to Rescue Rangers slash. Aim high, jerks!