A look at life after the apocalypse 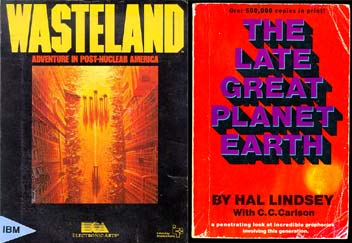 If only we had listened!Sooner or later you're going to wake up and look out the window and see a world you've never seen before. In reality, it will be the same world you know and pretend to love, but it won't feel or look the same. No, it will be more harsh and dangerous. You'll go to put on your underwear, but it will feel like you're putting on underwear made out of sandpaper, which is neither comfortable nor fashionable. You'll be depressed and life will be one giant igloo icebox full of misery – misery and generic cola. And maybe some French onion dip, but it will be all watery. But such will be the norm because hey, congratulations! You just made the transformation into post-apocalyptic life!

Of course the apocalypse hasn't happened yet, but it will. Perhaps while you sleep, or perhaps right before your eyes! And when the Apocalypse gets a notion to sneak up on you, there isn't any thing you can do but shriek like a girl and pray it doesn't make a desert out of your ass.

Thankfully we're fortunate enough to live in a society were marauding raiders and radioactive animals exist only in our hearts and dreams. However, we're unfortunate to live in a society hell-bent on being as humanly stupid as possible. It's only a matter of time before some kind soul does what's necessary and nukes the hell out of this planet, putting a stop to the foolish pursuits of man: rave parties, furry camps, and all that other stuff that makes us humans dumber than rocks. I don't mean really smart moon rocks either, just regular old rocks.

But don't fret, for the apocalypse is in many ways the dawning of a golden new age, where men can once more be manly and women can take their rightful place as currency. Oh, and the effeminate men can take their place as nefarious villains who use homoerotic tension to unnerve the various heroes of post-apocalyptic times. Sure, the challenges and dangers will be a lot greater than they are now, but that's okay because the rewards will be a lot less rewarding. And in post-apocalyptic times, that's just the way we'll like it.

Illustration as to what a post-apocalyptic raider might look like.And then the post-apocalyptic farmer buys a hat with a rough texture, that's full of send, and is seemingly designed to vex its wearer. But that's how things will be, and they could be a lot worse.

Painful post-apocalyptic hats are just one of many threats man will be facing. In addition to the raiders and other assorted post-apocalyptic denizens I've previously mentioned, there will be a wealth of other hostile perils to contend with, such as:

Of course the biggest threats will be the radiated insects. Because of their accelerated life cycles, they will mutate much more rapidly. As a result, they will be quick to gain dominance over man. And let me tell you, working as a slave for a colony of giant mutated ants isn't anywhere near as pleasant as it sounds. It's tough, grueling work, like being the guy who has to lower live animals into Mike Tyson's cage at feeding time.

All and all, the post-apocalyptic future is going to be one tough town. But with a good work ethic and a pinch of primal bloodlust, you'll do just fine! Remember to lock your doors and windows the night before the bombs go off, because your next-door neighbor might try to get a jumpstart on being a raider. Also, stock up on bug spray. Lots of it.