Hello Kitty, It's Time to Die! 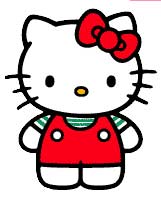 Goodbye. No really. Goodbye.We all know that Japan is quite possibly the most deranged place on the face of the universe, what with its pioneering of strange and bizarre fetishes and gung-ho attitude towards penetrating women's vaginas with tentacles. That's just accepted fact, and though it might be considered a handicap by some, we all know that it's what makes Japan so special. To think that one of the most powerful and advanced countries in the world could be so insane is a breath of fresh air and inspiration to all those other poor and insane countries out there. Of course I don't want to generalize Japan as being a place of nothing but creative depravity and cut short its other accomplishments. Japan is a mecca for advanced technology that pushes the boundaries right off of a cliff. Where else in the world are you going to find a handhold instant messenger that also analyzes your stool sample, tells you when to clean your ears, beams an electric shock to your pet cat's prostate, and is powered by a special adapter that attaches to your nipples? Probably not anywhere in Ecuador, that's for sure. 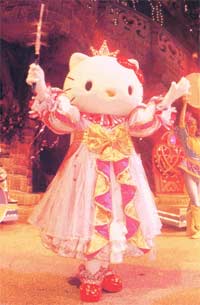 What the hell is this?The real monster coming out of Japan doesn't have any tentacles or rape schoolgirls, isn't obnoxious bug-eyed anime, surprisingly isn't Final Fantasy, and definitely isn't a high-tech hair comb that changes colors based on bowel movements. It's the cutesy scourge of Hello Kitty and that dreadful Sanrio yakuza. For the luckily uninformed, Sanrio gave this description of itself on their corporate website:

Sanrio was founded in 1960 by Mr. Shintaro Tsuji. Mr. Tsuji created a line of character merchandise designed around gift-giving occasions. Forty years later, Mr. Tsuji is the Chairman of Sanrio Company, Ltd., based in Tokyo and with distribution throughout Japan and Southeast Asia, the Americas and Europe. Sanrio, Inc., is the wholly owned subsidiary of Sanrio Co., Ltd., and is headquartered in South San Francisco, CA. Sanrio Inc. distributes products throughout North, Central and South America. Sanrio began in the western hemisphere in 1976 with a boutique store in the Eastridge Mall in San Jose, CA. In the Americas today, over 4,000 locations proudly display Sanrio character merchandise. This number includes two hundred Sanrio boutique stores, the ultimate destinations for the Sanrio magic. Over forty of these stores are owned and operated by Sanrio. The rest are independently owned by operators who share our "small gift, big smile" philosophy

Ignoring the obvious drug lingo ("the Sanrio magic"), you get the general idea. It's a multinational corporation that sells overpriced cutesy crap to millions of customers who may or may not be criminally insane. I'm not sure whether it's an ancient Egyptian curse or some sort of bizarre personality trait I suffer from, but virtually every female person I've ever known has had a raging hard-on for Sanrio merchandise. This vexes me, because first and foremost, I am a being of logic. While scarcely anything I say on this site can be categorized as "logical," I am careful to utilize logic in my daily life in a hopeless attempt to not to destroy the world I live in or myself. I never smoke or do drugs, rarely drink, and I always release the children I catch so as not to deplete the population. I credit this to following the example of Spock, a wise elf from Stephen King's "Lord of the Rings" quadrilogy. I'm also frugal, but not in the gay "arguing over the price of bananas" way. This logic, combined with my frugalness, is what makes me loath Sanrio's cabal of cute little mutants. Just like how the terrorists somehow hate freedom and happiness, I hate Hello Kitty and want to fly planes into Sanrio stores. Obviously I won't actually do that, because I'm terrified of flying and most of my attempts at hijacking things, such as playground slides and monkey bars, have led to me getting pelted with rocks or having sand thrown in my eyes.

Senrio makes its vast riches by essentially painting random objects hideous colors and sticking character designs on them. For example, they might take a regular, boring old kidney dialysis machine, paint it hot pink, stamp a Hello Kitty character on it, and sell it for 400% more than it would normally cost. This type of price gouging is a common practice for the Sanrio cartel, as highlighted in table 100.12-ALPHA-FOXTROT-BRAVO-ZERO-NINER. 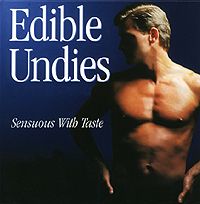 I included this picture to disrupt the overwhelming cuteness. Also, my underwear is butterscotch flavored.As if the ridiculous highway robbery taking place inside every retailer of Sanrio merchandise wasn't bad enough, it's even worse when you see what the fuss is over. Yes, even I'll admit that Hello Kitty is cute, but that doesn't mean I want everything I own, let alone anything I own, branded with that damn cat's soulless visage. Hello Kitty herself looks like some sort of brain-dead zombie with empty black eyes that draw you in like a cave filled with poisonous blob creatures and the possibility of finding a treasure chest with a blob poison antidote. If I had to guess how she became a zombie, I'd wager that she died from health complications relating to chronic bulimia, and was reanimated from residual radiation still lingering from the atomic bombs. That's just an educated guess and could very well be wrong, but I doubt it. The other Sanrio posse members are equally uninspired and vapid. Once Mr. Shintaro Tsuji came up with one character design, he only needed to swap a few colors and shapes around to get the rest. While the end result in a consistent lineup not unlike a conveyor belt full of delicious baby chickens, it's nothing that really deserves millions and millions of dollars or a following even more fanatical than some of the very respectable doomsday cults out there. Heck, even our own Tom "Moof" Davies comes up with far more interesting and cute animals and from what I understand he can barely afford to take care of his precious pet cactus, let alone pay off that poor cactus's vast student loans. 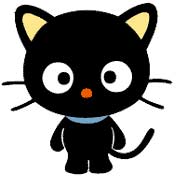 HOLY CRAP A BLACK CAT! THIS IS THE MOST CREATIVE IDEA SINCE MOONBREAD!

Now it's true that Sanrio merchandising isn't any different than, oh, say Star Wars mass merchandising, which is pretty disgusting. Lucas has stamped Darth Vader on just about everything from bath wash to Popsicle making kits in a desperate attempt to draw in more money so he can make his movies look like seizure-inducing cartoons. But people buy this stuff up, and it scares me. I can understand some merchandising, but when you have to have an entire store just to sell unnecessary items you've put logos on, then by God, you've gone too far and you need to be institutionalized. I find it especially troublesome that the scourge of Hello Kitty seems to bypass any age limitations, and seems to have a stranglehold on people who should be old enough to know they are being swindled by mass-produced cutesy crap. Maybe that's all part of the sinister Sanrio agenda: to create a mass of machines that function only to serve the whims of their masters, just like Robocop was designed to do. Let's hope that they follow Robocop's lead and break free of their enslavers, helping to build a better tomorrow in the process.

Hey everybody, this is Ben "Greek Nerd" Platt here. Today, I decided not to do a movie review, but instead wrote a long thesis on the declining state of modern dance today. Then Lowtax broke my knees with a piece of firewood and told me he wouldn't let me get medical attention until I did a movie review after all. So now I stand before you a broken and miserable man, having just watched a reviewed a piece of utter tripe called "Frogs."

The tarantulas don't actually attack Michael, though. Instead they sort of throw clumps of moss at him. I don't know what happens, exactly. The camera keeps cutting back and forth between Michael and one of several tarantulas, and every time it goes back to Michael, he's got more clumps of moss on him. Somehow this kills him. You know, just like in real life. Then entire sheets of webbing start draping over his moss-covered corpse. Now, I don't claim to be an arachnid expert, but if any tarantula actually made this much webbing this quickly, then a group of tarantulas this large could have a square mile of forest covered in web in half an hour. You know, just like in real life.

What other surprises does "Frogs" have in store? You'll just have to read the review to find out!