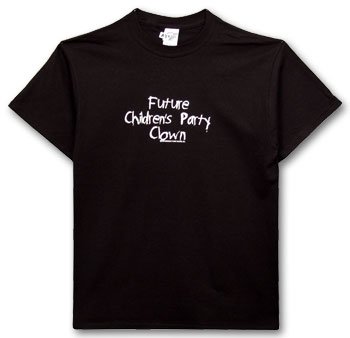 I bought my "Future Children's Party Clown" t-shirt as a nonconformist statement. I've never been one to define myself by my clothes, so the shirt's ironic slogan appealed to me. I might have been weird, troubled, maybe even a little creepy, but I knew I'd never become a children's party clown.

When I first wore the shirt to work on casual Friday, it got tons of laughs. Everyone at the office thought it was clever and unique - just like me. It was so popular, I started wearing it every Friday. It sort of became my thing. Just like Alicia, who liked penguins, was the Penguin Lady, and Mike, who liked the Patriots, was the Pats Fan, I was the Clown Guy.

After a few weeks, the dreams started.

In them, I'd be in a room surrounded by laughing children. I'd twist balloons into animal shapes and perform magic tricks. The kids loved me and I loved them. I'd wake up with a start, drenched in sweat.

The dreams started to creep me out eventually, so I stopped wearing the shirt. My coworkers commented on this once or twice, but soon they forgot about it. The dreams went away in a couple weeks and I was relieved. The whole clown thing seemed to be behind me. Or so I thought.

One Friday, I was at my desk when I heard everyone in the office laughing. I walked into the break room to see what they were laughing at and saw it was my coworker Fred. He was wearing a "Future Children's Party Clown" t-shirt just like the one I'd worn. Same color, same design, everything. Everyone loved it and was complimenting Fred on how funny and creative it was. Way more than they'd ever complimented me.

I mentioned, just casually, that I had worn the shirt before Fred, but no one seemed to remember. Except Fred obviously, but he said he thought I'd given up being Clown Guy. I had, I said, but that wasn't the point, he was taking credit for my idea. Get over it, he said, looking at me like I was crazy. We didn't talk for the rest of the day.

For the next few weeks, Fred continued wearing the shirt to work. Every Friday, I'd hear everyone laughing at it, telling Fred how funny he was. They even started buying him clown stuff like balloons, a seltzer bottle and a clown belt buckle. He wore the buckle and displayed the rest of the stuff in his cubicle. I'd stopped associating with Fred by then, and had asked to be transferred to another office. The day after my transfer got denied, I called in sick. The day after that, I waited for Fred in the parking lot after work.

I was in my car, a tiny electric model that my coworkers used to jokingly call my clown car. I waited for Fred to walk out the door. It was a Friday and as usual he was wearing the clown shirt and belt.

"What is it?" he said as I pulled up behind him in my car.

"Take off that shirt," I said.

"You stopped wearing it," he said. "You think just because you wore it once or twice you're Clown Guy forever?"

"Take off that shirt," I said, driving behind him as he walked.

"It's not like you invented it or something." He started walking faster. "It says, uh, '2003, Brooklyn T-shirt Factory.'"

I revved my engine. Fred jumped a little, then peeled off the shirt and threw it on the pavement.

"Are you crazy?!" Fred shouted. I revved the engine again, at which point he bolted for his car.

I was fired for the incident, and Fred filed a restraining order. For the next year, I worked various jobs - file clerk, forklift driver, bitcoin miner - but always ended up quitting. None of them seemed right for me.

One day, a clown college brochure came in the mail.

Now I'm at a children's birthday party. I wear a baggy suit, giant shoes, a bright red wig. I make balloon animals and do mime routines while my assistant runs a cotton candy machine. The children laugh at my antics - a high trilling sound I've come to love, far more than I ever liked office work.

The birthday boy's mother takes a picture of me and the children. I catch a glimpse of it on her phone and I'm shocked. It isn't that I don't recognize myself, but that for the first time in my life I actually do. 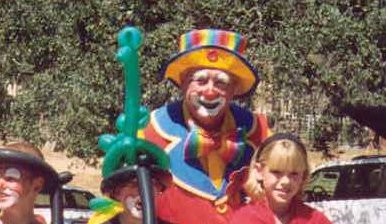