Helpin' Out With Terrorist Threats

This Just In: Someone May Want to Hurt You! 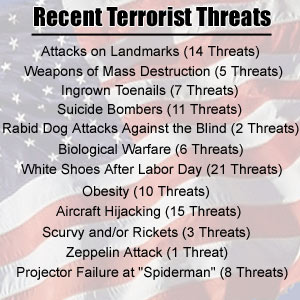 A number of terrorist threats have been predicted by the FBI since the attacks of 9/11.God bless the Federal Bureau of Investigation; they work tirelessly to protect us from the mysteries of the deep and they are rewarded with accusations of silent foreknowledge of the September 11th attacks. The FBI are the heroes of the 21st century, putting their lives on the line day in and day out in their work walking to and from the fax machine to send out the latest list of threats against our national security to various media outlets. They are down there in the trenches interrogating Taliban and Al-Qaeda prisoners until they reveal yet another unlikely scheme that the FBI can sound the warning sirens for.

Preparedness I understand, but constantly trying to alarm every segment of the American public is ridiculous. I doubt the FBI is even getting these stupid plots from the prisoners they're interrogating anymore; I think they just have meetings almost identical to writer's meetings for a nightly comedy show. They sit around a big FBI table and throw out ideas for the next morning's exciting press release and make sure to include as many different professions and lifestyles as possible.

FBI Chief: Okay people, we need to come up with a new terrorist threat warning in the next few hours and I am not staying late tonight, my kid has soccer practice tomorrow.

FBI Agent: Ooh, that's a good idea Chief, we could say that there's a credible threat to soccer practices and that terrorists are going to put chemical weapons in soccer balls.

FBI Agent 2: Yeah! Or we could have the terrorists putting stolen Russian plutonium in the coach whistles across America and when the coach blows the whistles he explodes like in Scanners.

FBI Chief: No, we did a Scanner-related terrorist threat last week, and plus I don't want you scaring my wife. Anything else?

FBI Agent 2: Tom Clancy is big, we could do something about blowing up a stadium in Boston.

FBI Chief: No, dammit! We already ripped him off enough, we don't want people catching onto where we're getting the ideas for these, plus we just released that "anonymous statement" about his movie timing being bad. You know, along with our warning about the robotic bole weevils.

FBI Agent: Okay, okay, okay, I got it! Al-Qaeda operatives disguised as lumberjacks are smuggling crack-cocaine inside of hollowed out babies across the US-Mexico border to help fund their terrorism.

FBI Agent: Sure, that can work, we can spin that. Stolen Czechoslovakian baby robots.

Eventually the FBI is going to start running out of these kind of ideas, so in an effort to do my patriotic duty and help, I have interrogated a group of imaginary terrorists and convinced them to give me their imaginary plans for imaginary attacks against the United States. With the FBI taking hundreds of agents off of criminal investigations and reassigning them to making up terrorist attacks, I know they can use the help. 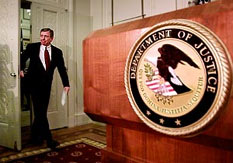 A recent photo of John Ashcroft approaching the podium to brief the press on the daily laundry list of "unconfirmed terrorist threats".

Terrorists Disguised as Police Officers
Threat: There is a credible threat that terrorists disguised as local police will be attempting to infiltrate the streets of major metropolitan centers throughout the United States. Disguised as officers of the law they may issue orders to the citizenry and use their authority as policemen to get what they need.
Danger Rating: Very high ranging to "green" on the danger-o-meter.
Suggested Reaction: If you feel suspicious of a police officer's behavior then demand to see his badge regardless of the orders he has issued to you. Key warning signs of a fake officer include commands to: "stay where you are", "put the gun down", "put the hamburger down", "pull the car over", "watch out for that falling girder", and "don't move our you'll only further agitate the killer bees".

Hamburgers Made Out of Acid
Threat: In their secret chemical warfare labs evil terrorist scientists have developed a form of acid that looks exactly like a normal McDonald's hamburger. Armed with these a number of terrorists may attempt to find jobs working at hamburger outlets, replacing nutritious and delicious regular hamburgers with their deadly acid hamburgers.
Danger Rating: Level 9 ranging to "off-white" on the danger-o-meter.
Suggested Reaction: Put the hamburger down* if it begins to melt through the bones in your hands. If it is melting through the skin on your hands but not the bone check to see if you are a White Castle, if you are this is normal. DO NOT STOP EATING HAMBURGERS EVERY DAY. Burger consumption must be maintained at all costs or the terrorists win.
* Unless a terrorist disguised as a police officer tells you to put the hamburger down. 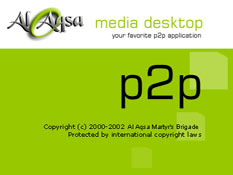 Peer to Peer File Sharing
Threat: Vile terrorist scum will set up software that will allow one computer's files to be shared with another, thereby facilitating the piracy of valuable American commodities like that No Doubt song about "hella" or the video clip of the cat on the bed getting scared and jumping into a wall.
Danger Rating: Off the charts ranging to "sultry crimson" on the danger-o-meter.
Suggested Reaction: Buy only CDs encoded with Sony's completely unbreakable copy protection (unless you draw on the last track with a marker) so that you will not fall under the sway of evil terrorist file-sharing mesmerists. This terrorist activity warning has been brought to you by the RIAA, looking out for you by looking out for the future of our own money.

Terrorist Fashion Designers
Threat: Terrorists are planning an attack on this year's summer fashions. Leading homosexual analysts predict deep cuts to the bust line, lots of hip hugging pants, and a definite emphasis on the posterior. Hats may be out, but turbans are in. Hygiene has taken a back seat to style with this year's hottest lineup from various cave-dwelling shell-shocked hipsters. That waif look has been accentuated with malnutrition gut-bloat and sleepless bloodshot eyes rimmed with the fear of knowing that a laser guided bomb may send you to Allah. Bandoliers of explosives and AK-47s are expected to blast onto racks at the hottest boutiques in New York and Paris.
Danger Rating: Apocalyptic ranging to "chartreuse" on the danger-o-meter.
Suggested Reaction: Those terrorists will tell you their styles are a "fashion do" but John Ashcroft is here to tell you they're a "fashion don't". This year show your patriotism by covering your body with American flag bumper stickers while singing "The Star Spangled Banner" at all times. Tell mom and dad that you're on the cutting edge of fashion by donning that three-piece blazer with a red power-tie, chill out next to the pool and recite the pledge of allegiance to an 8 ½ x 11" glossy photo of George W. Bush getting the call about the September 11th attacks.

It is my sincere hope that the FBI will be able to use these in their future warnings about impending attacks. They may not seem particularly plausible now, but just wait until you see some of the threat warnings the FBI trots out in the coming months. Once they start mentioning either martial arts or the undead, I think that it's come time to turn to my little list here. I would give the undead three months, maybe two if you're including CHUDS.

Get ready for thrilling chills and gripping cinema action, because Photoshop Phriday is here and ready to rock the T-cells out of you. This week's Photoshop Phriday focuses on ruining classic film posters, so you can already expect some insanity. No? Well then take a peak, bucko: 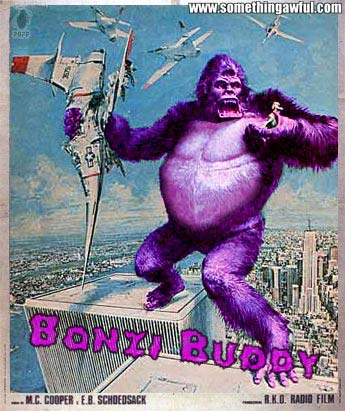 It's all waiting for you, hero!