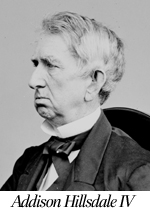 When my editor, a colored fellow by the name of Mr. Charles Washington, told me I was to sup at an eatery run by mongoloids, I simply balked at the idea. "Chinamen! Running a restaurant? Next you'll be telling me that I'm no longer allowed to put my cigars out on the mail boy!" To prove my point, I summoned the boy and put all of my cigars out on him. Mr. Washington then called to my attention the fact that every editorial staff of GNS since the early 1960s has tried to stop me from extinguishing my cigars on the skin of office-workers. But I had tenure then, and I have tenure now -- I do so hope you're reading this, Mr. Washington. That ruddy-faced Welshman (you can spot them a mile away) of a mail boy is in for a series of painful, circular leg burns in the future. This I can foresee.

Regular readers of mine know that I do not have a taste for the culinary creations of those closer to apes than even our dear friends at the zoological gardens. When the first McDonald's opened its filthy, Irish doors in 1940, I chose not to review it. Instead, I imbibed many bottles of Tophat Brand Whiskey and wrote an award-winning column about life after 50. Sadly, the cruel parody of food created by these yellow-tinted sub-beasts will not produce the same results. I regret to inform the reader that this column will not match the positivity streak which I been riding of late. Articles such as "Applebee's #437: Love that Slaw!" "Applebee's #349: Soft Drinks Abound!" and "Applebee's #801: I Am Pleased With All of This Bacon!" are best forgotten at this juncture.

Mr. Washington gave me a choice: either ingest the terrible, Eastern food and record the results, or allow the International Mailworkers' Union continue their incessant litigation against me. I chose the food; I prefer sickness of the stomach system to sickness of the mind caused by lawyers in this depressing Jewtopia of a country. 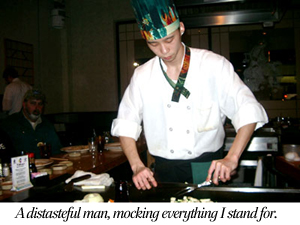 And so, we start at the unpleasant beginning. I entered Wok and Roll with a sense of dread and a satchel full of soiled cummerbunds. After all, one would think that these people would have a washing machine or two on the premises, given their genetic predisposition towards laundry. Unfortunately, they didn't; and I would take the time to relate this tale of injustice if not for a certain country heifer who becomes furious with cow-rage when her advice column is truncated. Heaven forbid.

A small Asianette met me in the front of the restaurant. "I prefer a booth, and I prefer to dine alone." She nodded her head, and proceeded to lead me to a circular table at which two families sat, one looking dangerously Italian. I bellowed at the Asianette the same command I had spoken seconds earlier, and proceeded to use my thumbs to pry open those lazy eyelids of hers for the purpose of showing her the amount of displeasure I was experiencing. In the past, I have found that using force on those of smaller minds usually produces results; in this case, the female creature scurried away screaming in that awful language. It was very ugly, and let's just say we should all be happy that these people have not yet discovered how to write down all those terrible words of theirs.