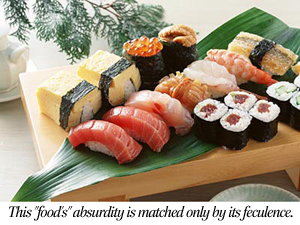 Once that debacle was over, I sat and proceeded to read the series of newspapers that I bring with me on every outing. This caused the large, trollish Italio next to me to take an interest in what I was doing -- as if the great ape could understand the words and letters on the sheets of paper unfurled in front of me. "That got anything in there about the Cavs game," he asked, grinning like an idiot. I responded in kind. "Listen to me, you reprobate! The only cavalier I care about is Sir John Suckling and his magnificent poetry! Get thee hence!" Obviously, he had no idea what I was saying, as my vocabulary cannot be found in the gutter, so I decided to punctuate my remonstrance by knocking over his iced tea. Needless to say, after that he did not bother me for the rest of the evening.

After an interminable wait, our chef appeared -- but he carried no entrees on his person. Instead, this man climbed to the interior of the table and began preparing ingredients. The questions I kept to myself pertaining to the location of this hovel's kitchen were answered -- frighteningly so. This was the kitchen, as was every other table. I wanted to vomit, but I found it impossible. And what happened soon after the entrance of this culinary barbarian made the sickness completely overtake me. This fine evening was about to turn into a nightmarish midway of food.

Readers, would you find it distasteful if you went to a restaurant, and this particular establishment decided that the best way to serve you baked potatoes would be to have a large walrus launch them into your mouth using the sheer force of its anal cavity? And how would you feel if a parade of cats tossed your dinner salad? Surely, you would find it reprehensible -- as did I, when this trained chimp of a chef began treating the food as if it was the playthings of babes. An ordinary onion, sliced into a stack of rings, soon became a terrible volcano, belching flames into the air after Ching Chong Chang (his actual name cannot be said by the Protestant tongue) poured what I can only assume was kerosene into the center. The Italios clapped their hands and barked like seals for this trick -- one can only think of the power someone like Dickens would have on their small minds, if only they didn't spend all their time copulating. 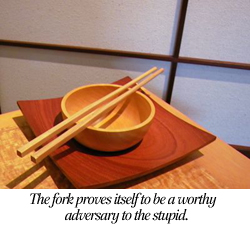 Ching Chong wasn't done raping the culinary arts in front of my very eyes, much to my horror. He made an egg dance on two spatulas like a drunken gypsy, only to send it hurtling through the air, landing in his hat. The others lauded him, and I could only mock their naïveté for applauding what was obviously a mistake. C.C. Chang then had his way with another egg, heating it on his perverse slab of cursed food. When scrambled status was imminent, he shockingly flung pieces of egg into the mouths of my simple dinner companions, delighting them with the novelty of a meal not cooked on the surface of a hot rock in the center of the slums. Do not worry for me, dear readers. I did not have "egg on my face and also neck," so to speak. When Chang pointed that spatula at me like some repugnant Asian dagger, I began to savage him with the business end of The Wall Street Journal. This made him leave to go "take break," which, surprisingly, didn't end my troubles. In fact, it brings us to the climax of this mongo-nightmare.

The little Asianette reappeared, holding a tray of colorful foodstuffs. "What concoction have you brought us now?!" My demand was answered smartly by the scruffy Italio: "Sushi. It's raw fish." Darkness started to overcome me. The very thought of eating uncooked meat made my entire body go limp. Here I was, Addison Hillsdale IV, a distinguished gentlemen, about to eat raw fish with a collection of troglodytes?! And afterwards would we defecate into a pile and use said pile to create elaborate tribal designs all over our faces and bodies? I didn't want to stay to find out, and I thank the Lord that I remembered my lantern full of smelling salts. After opening that tiny, wrought iron door, I was on my feet running towards the entrance, bowling over the Asianette in the process.

Wok and Roll, you disgust me on levels not yet imagined by man.


Addison Hillsdale IV is the Head Editor of Arts and Culture at Gentlemen's News Service and the author of Fortitude: A History and Where's the Tenor? The Ultimate Guide to Opera Glasses. In October 2007 he will celebrate his 108th distinguished year as a staff member.