One of the most revolutionary, educated, talented artists has recently been discovered on the internet, a man who is capable of creating highly detailed and thought-provoking political cartoons that are shared world-wide. Unfortunately, this article is not about that person, it's about Ben Garrison, a man who should, in an ideal world, be unable to produce anything that anybody might ever accidentally see with their eyes.

Garrison relentlessly scours news sites, looking for exciting articles to help support his radical theory that Donald Trump isn't actually the worst President ever. He demonstrates his admiration for his audience by helpfully labeling virtually every single object in each cartoon, proving his awareness that his target audience has the collective IQ of a public bench. In this article, I will take a look at some of his best illustrations and help you, the dumb viewer who is dumb because you don't understand Trump is a living god, understand these complex works of art. 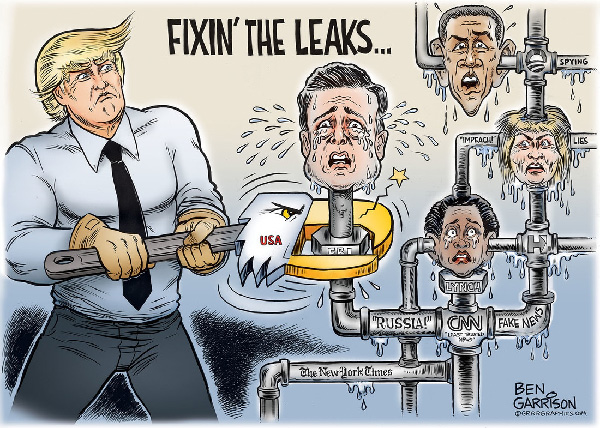 Don "The Plumber" Trump has taken it upon himself to get all formally dressed up so he can fix the living, human, weeping Cronenberg plumbing system that doesn't really seem to have any logical layout or purpose. Some of the pipes have names such as "The New York Times," perhaps to infer that in Trump's America, newspapers are delivered through pneumatic tube systems such as the notices in The Hudsucker Proxy.

The various weeping severed heads seem extremely depressed, perhaps because they are severed heads impaled with pipes in a basement, being attacked by a burly constipated man. President Trump is tightening a pipe with his patented Eagle Wrench, which appears to be alive and terribly angry, clearly from the inherent pain of its own existence. The tube on the top right is labeled "spying," so perhaps there's a sink in the White House which offers cold water, hot water, and spying. I don't know how that works. 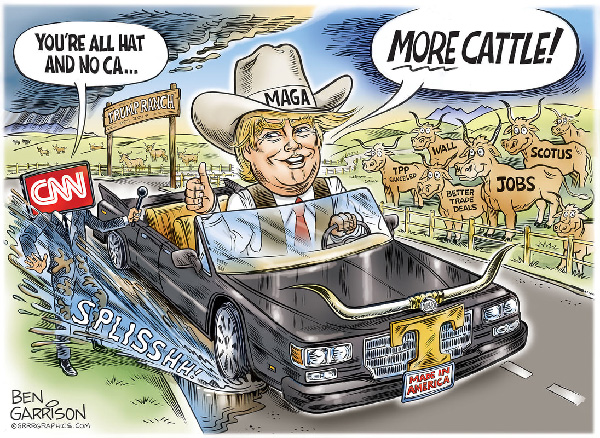 Here we see President Trump cruising along in his proud Texan Batmobile, giving a big smile and thumbs up to a man with the letters CNN for a face, who is apparently attempting to record the sound of Trump's car seat with a microphone not connected to anything. Unfortunately, Trump's razor-wheels have splashed water all over the rectangle-skulled reporter, despite the lack of water anywhere else on the road. The reporter was in the middle of accusing Trump of being "ALL HAT AND NO CAULKING," which I don't quite understand, but I assume is a phrase popular within the circles of print media.

An entire herd of cattle look on, impressed by the car which is adorned by one of their own horns. They seem very pleased that one of them was murdered simply to decorate Trump's front bumper, and the cattle labeled JOBS, SCOTUS, WALL STREET, and BETTER TRADE DEALS are looking forward to dying as well. Also either Trump is huge or he drives a clown car, as his skull is half the size of the entire vehicle. His hat alone looks like it took tailors months to produce. 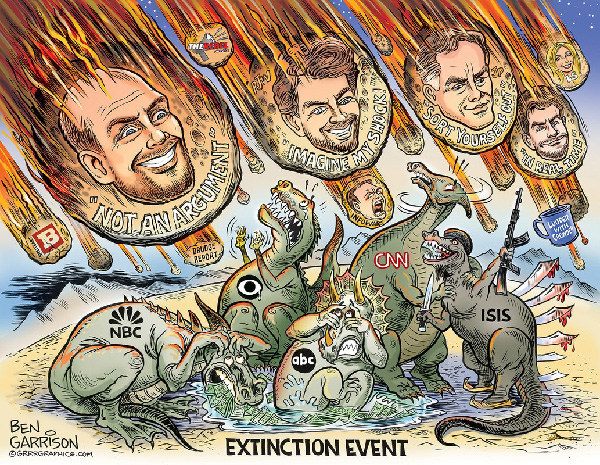 Here we see an "EXTINCTION EVENT," as a group of dinosaur-dragon hybrids puking up cash are about to be wiped out by flaming man-heads from outer space. All the major news networks are represented here, including ABC, NBC, CNN, and ISIS, who I did not know had a news channel but I guess they do and you can only pick it up Videodrome-style. The flaming white man-heads couldn't be happier, as it's always been a dream of theirs to explode and die, thereby freeing them from this body-less existence of pain and suffering. Also there's a blue coffee cup on the right. Dinosaurs hate those things a lot. God bless you, flaming outer space white man-heads for wiping out the cash puking dragons of old. 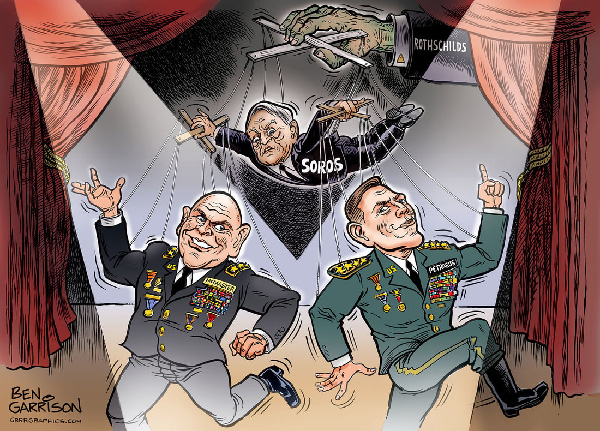 Here's a couple military guys who won a bunch of awards for being so good at military, just having a grand ol' time dancing the night away. But upon closer inspection, they are not real human beings at all... they are PUPPETS being controlled by a floating SOROS, the man who is responsible for nearly everything bad anywhere all the time. BUT WAIT - Soros is also a puppet, one being controlled by the rotting, diseased hand of somebody who buys their suits at a store named "Rothchilds." So what we have here is the most complex puppetry ever invented, one so powerful that the military guys are somehow able to dance despite having no strings attached to their legs or feet. Perhaps that's how they won so many awards, for Professional Military Puppet Dancing. I do not know if that's an actual achievable award, but it regardless should be.

#5: A VERY SMALL SHIP THAT DOES NOT AT ALL LOOK VAGUELY SEAWORTHY 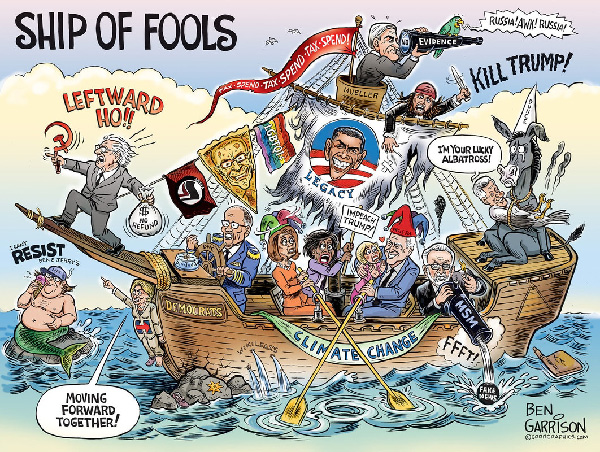 no fucking clue about this one

#6: AN ANGRY LINEBACKER FROM THE RAIDERS MARCHES ON 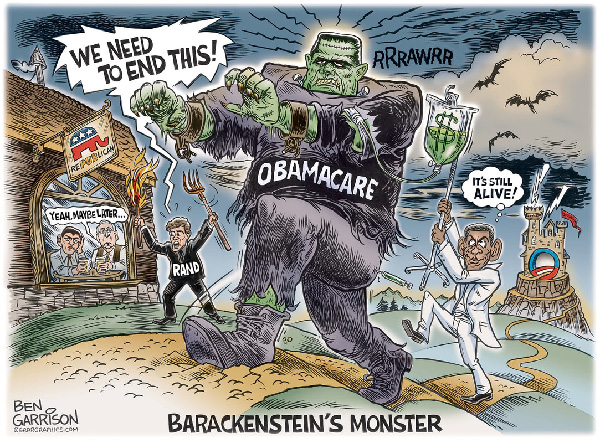 Here we have the fiendish Barack Obama, looking more like Bill Cosby pre-rape, holding an IV drip for his creation, "OBAMACARE," an angry linebacker for the Raiders. He has black lightning bolts flying out of his head because that's how Obamacare works; you sign up and within a few weeks, black lightning bolts begin shooting out of your skull, maiming and killing all your loved ones. This is why the GOP wanted to repeal it so badly.

Fortunately the monster is passing by the official Republican hut, which appears to be threatened by RAND, a frantic white dude armed with a pitchfork and torch. Why does he need both of those tools? Was he gathering hay and straw and then just lighting the piles on fire? Also why is Cosbama physically carrying the IV when it clearly has wheels on it? It would just roll with the monster, so there's no need to hold it, unless he's just proud and showing off his dapper pimp suit. Cosbama's castle is in the background being attacked with white lightning bolts, and I hope all the residents are able to flee from that dangerous warm front through the spacious circular front door. 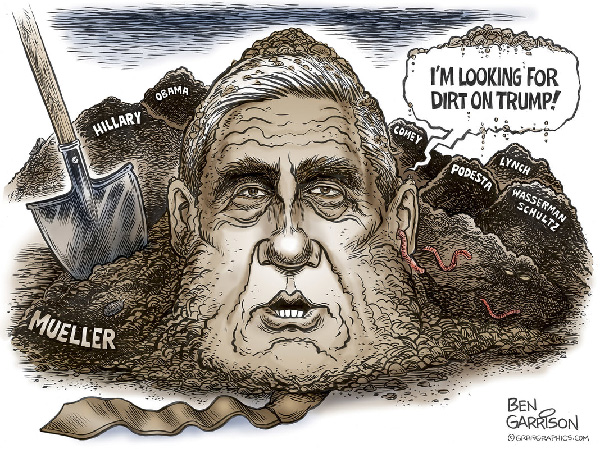 Here is a big fat lumpy head made out of dirt. He's looking for "DIRT ON TRUMP," which must be difficult for him as he clearly lacks mobility and could easily be destroyed by a light rain. He probably can't even turn his neck, mostly due to the fact that he appears to lack one. We can only hope President Trump notices the dirt pile man face and comes over so he can be checked for dirt himself. There are named piles of dirt in the background as well, such as "HILLARY" (she is made of dirt) and "OBAMA" (America's first dirt President).

Dirt pile man face also has a worm problem, as they are actively either entering or exiting his ear. All in all, things don't really seem to be going his way, minus the very professional dirt tie he's wearing, somehow, for some reason. Maybe he's looking for a job, perhaps something in the dirt-related industry. Like a professional dirt. 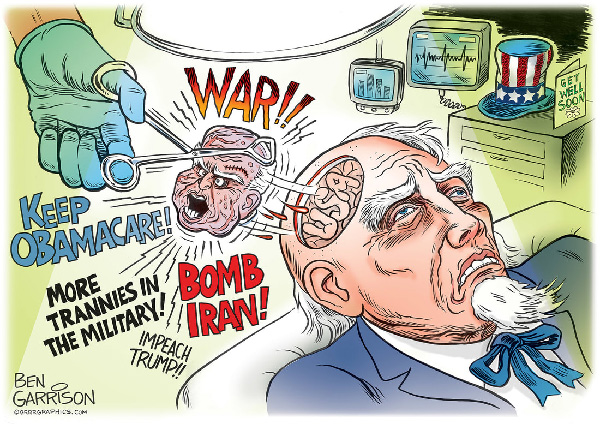 The once-proud purveyor of fried chicken, the wise and timeless Colonel Sanders, apparently had something wrong with his brain, as a large chunk of it is screaming and also has teeth and eyeballs. If you look at the hole in Sanders' head, there's simply no room for the shrieking tumor, so I am assuming it was a growth protruding from his head. It must've been awful for him to walk into one of his many franchises to greet customers, while a chunk of his skull was screaming "MORE TRANNIES IN THE MILITARY!!!" I'm sure he would try to apologize and explain the growth does not represent his views, but would be drowned out by the shouts of "WAR," which is a somewhat ambiguous statement to proclaim. Like, okay, what about war? Is it just admitting war exists? Or is it pissed off and declaring war on the severed arm that is forcibly removing it?

The most troubling aspect of this cartoon revolves around what can only be described as a botched surgical procedure. The poor man's operation seems to have be performed without anesthetic, which troubles me and makes me hesitant to ever visit this doctor, especially since the Colonel isn't even dressed in a surgical gown. They did put his patriotic hat next to the bar graph machine, which is nice because then when he turns around to check how his bars are doing, he'll see his hat and say "boy I love my hat and cannot wait to wear it again, once they patch up the enormous hole in my skull. Also I think I may be dead."

#9: A BUNCH OF FIRE PUKING BASTARDS SCREAM AT A RED CAN 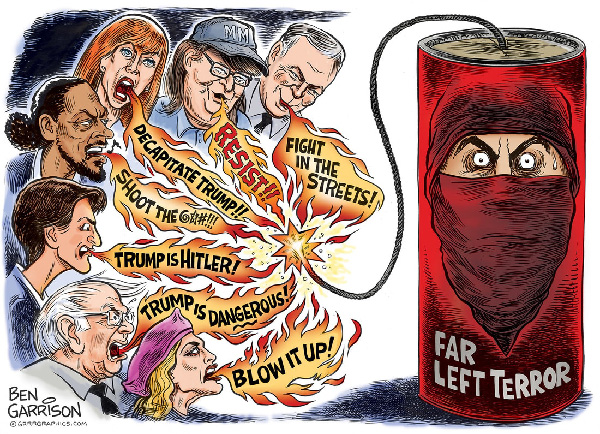 A group of very angry mutants who have developed the superpower of shooting flames with visible words from their mouths are screaming at a large red barrel containing a sweating far-left terrorist. They want it to explode because it's creepy as shit to see a living red barrel with gigantic eyes and it probably frightens away children and pets if it's placed in a public location, such as a park or mall. The black guy is saying "SHOOT THE @*#!!!" which is an extremely cryptic statement by itself. I suspect he was yelling just for the sake of yelling, so his fire could join all the other fire and he wouldn't feel left out. An orange-haired harpy is belching out "DECAPITATE TRUMP," but her fire seems to be more like puke and she should probably consult a doctor about it before it gets worse. Not the doctor in the drawing before this one though. Regardless, we should thank these brave floating heads for wanting to destroy the FAR LEFT TERROR barrel and possible sacrifice themselves in the process. Kudos to all of you brave souls, may you one day discover the bodies that belong to you. 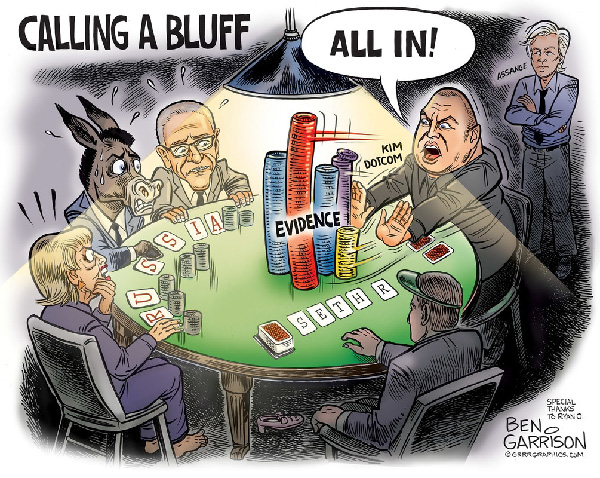 Kim Dotcom, a man who is best known for doing things that aren't really the best things a person could ever do, is backed up by Assange, who might also have the same description applied to him. In this exciting new card game, which I do not know the name of and seems to abide by arbitrary rules, Mr. Dotcom has gone "all in" with his "evidence" chips. The yellow chips represent 1 evidence, while the blues are 100 and the reds 1,000. If you add them all up, that's a lot of evidences, and I'm not even counting the purple ones. The furry in the donkey suit is scared because Mr. Dotcom has two cards face down, whereas all he has is two cards, both of which are red "S"s. I have no idea what those cards are worth. Probably very little. His two friends beside him possess the "R," "U," "I," and "A" cards, all of which are visible to Mr. Dotcom and undoubtedly give him an insurmountable advantage in whatever the hell game they're playing. The dealer, who has given himself the "SETH R" cards, seems bored and probably confused at the rules of this game. After calling the bluff, what cards will Mr. Dotcom reveal? Double Qs? A super-Z? I do not know how this card game works, and it is wise of Mr. Assange to stay out of it and simply watch from the shadows. No wonder his site got so popular.

Well that's the first ten illustrations. I'll continue the series if anybody shows any interest whatsoever in it, but right now I need to take a break because my brain feels like it's attempting to strangle itself.