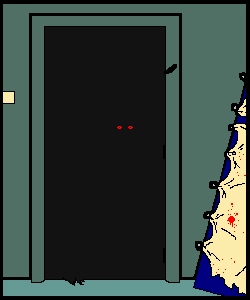 Torvald cocked the shotgun and blasted away at the ceiling. One craft disappeared in a flurry of plaster, paper and glitter. We shrank back. Torvald - a man who had allegedly lined his desk with the skins of loitering students - was not fucking around. One of the buttons on his overalls had come undone, and I could see shriveled mantit. It drooped solemnly, as if this were its first taste of freedom and it had expected so much more. He snorted again, looking for an answer. We panicked.

"Playing with balloons," one of us said.

"Uh huh," Torvald replied with contempt. "And where exactly did y'all git those balloons?"

The silence was heavy, like the first couple of seconds after your uncle drops a racial slur at the Thanksgiving table. Finally, one of us spoke up.

What followed was a very heated but one-sided discussion in which we were informed that Torvald was, in fact, good friends with the owner of the local balloon store - a hard-living and notoriously unpredictable man who apparently kept similar company - and knew for a fact that the store would never let its fine product fall into our grubby hands.

"Shit would be unprofessional," Torvald said, scratching himself.

We were given two choices: We could retrieve the balloons ourselves, or we could let Torvald shoot them down and then bill us for the damages. Despite Torvald's apparent and entirely unexpected generosity, we had no real choice. 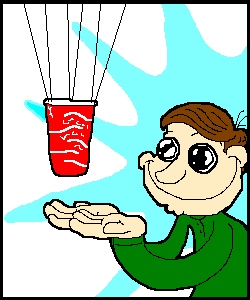 Our final craft of the evening was a cradle of sorts, hastily constructed out of paper cups and hoisted aloft by the remainder of the balloons. It had just enough room for one of us to hang on and ride it upward, where the intrepid idiot in question could reach out, nab a floating craft and slip some spare change into it to weigh it down. The plan seemed flawless, and we sent the lightest of us out over the third-floor balcony to grab the balloons and get them back to ground level.

Like Icarus, we longed to create and prosper, to soar on the wings of ingenuity. Unlike Icarus, we sucked at it. The editor we sent plummeted to the ground and collapsed in a pile of broken bones and sobbing, pulpy flesh. Torvald laughed and laughed, then cocked his shotgun and ordered the next one to go.

We lost some good editors that day. Our next issue sucked.