The cold of winter pelted the student center's brick walls, and deep within its confines something dreadful stirred. All sensible humanity had long since abandoned the building. What was left amounted to six student magazine editors, blissfully ignorant of the horrors that lurked just one floor below. I was one of those students -- a young arts and entertainment editor who, prior to that fateful night, strolled the halls with a chip on his shoulder. It is only now, with the passing of years, that I can look back and truly cherish things.

It was a frigid bitch of an evening. Cutbacks forced us to keep the heat and lights off, so we gave our most beloved mousepad to a vagrant by the front entrance in exchange for his barrel of burning trash. Carrying it upstairs was harrowing, because we didn't have the means to rekindle the fire and thus had to keep it lit. We were about to call it a night and trudge reluctantly home to nurse our burn wounds when, with a bang, our ad manager kicked in the door.

He held in one hand a bundle of strings connected to a massive swaying mass of black, glittering balloons. In his other hand was a stack of paper cups from the cafeteria downstairs. We asked him what the hell he was doing, and he told us he had stolen every decorative balloon from the staircase railing leading up to the ballroom. The Winter Gala was already in full swing on the other side of the student center, he said, and they weren't going to need the balloons anymore. Furthermore, he had a plan.

He held up the paper cups. These fuckers would fly. 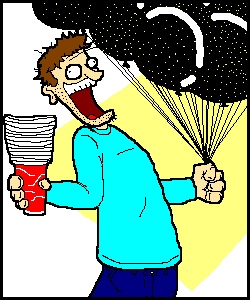 Though the staff's reputation was perhaps slightly overblown, it would be fair to say that we had done a number of things that would make elderly faculty consider us, to borrow their term, riff-raff. For a group of tired, cold and angry publications kids, the notion of a prank so simple - and, more importantly, harmless - was just the kind of thing we wanted to latch onto. We needed to know it was possible to have fun without having to clean up corpses afterward.

We spent the next few hours attaching the balloons to the paper cups, figuring out just how much shredded printer paper it would take in the paper cup "basket" to keep the balloon floating at an even height. Some were successful, floating majestically across the expanse of the student center's open commons area. Others still needed work, and they let us know this by drifting lazily downward to the floor below, where they spooked a few students. One of us would head downstairs and grab these failures. They were re-tooled and introduced back into the fleet.

Unfortunately, as our experiments drew on, we realized that our numbers were dwindling. Miscalculations and unexpected updrafts -- thanks, no doubt, to the high-rise ceiling and numerous, poorly constructed skylights -- meant that several craft had managed to soar into the unreachable expanse above the commons area. Like Icarus, they longed to eschew their creators' modest expectations and drift forever skyward. Unlike Icarus, they were not made of meat. When they floated up there, they stayed. We didn't know what to do, so we reasoned, as most college students might, that the best course was to leave them there for someone else to worry about.

That someone was Torvald. 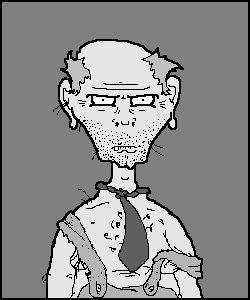 Torvald was ancient but mighty. His teeth were held in their sockets by little more than spite, and his tattered overalls hung from his frame like month-old bacon on a fishing hook. Most importantly, Torvald was angry. The student center was his baby, and we had defaced it. The door to his office swung open and clattered to the ground. He stomped to the center of the commons area and unleashed a scream that came from hell itself. We froze.

"The hell do you kids think you're doin'?" he snorted, shotgun in hand.