On January 16th, 2010, Space Shuttle Excursion experienced a catastrophic failure during the launch process, resulting in the complete explosive disintegration of the craft shortly after takeoff. All crew members on board, including astronauts Dan Peppergrave, Ruth LaGatta, Roger Birdcastle, Jack Hug and Lawrence DeLong, suffered mild to moderate injuries, including second-degree burns, fractured ribs and the total death of all of them.

This document, as ordered by the NASA Accountability and Safety Agency (hereafter referred to as "NASA"), seeks to outline the cause or causes of this launch failure. While NASA is still collecting evidence from the site of the Excursion explosion and a final accident report cannot be completed until the investigative process has concluded, our preliminary investigation points to several possible faults in the launch process that may have partially contributed to the catastrophe.

The shuttle's orbiter vehicle and rocket boosters are comprised of hundreds of thousands of extremely sophisticated components; even a failure rate of 0.01% would result in thousands of components failing, so it's very difficult to pinpoint the exact malfunction or malfunctions that resulted in the shuttle's rapid destruction upon takeoff. Some evidence suggests that the relatively warm weather on the launch day may have caused the O-rings that connect the orbiter's cooling system to its secondary subwoofer to expand, resulting in decreased output to the shuttle's life support and stereo systems. Some weathering of the craft's external shingling was observed, as well as light mossing around the rain gutters, but these factors were determined to be narrowly within standard safety parameters.

The scientific and promotional objectives of the Excursion's mission may have also exacerbated the circumstances resulting in the shuttle's failure. In order to test the feasibility of scientific "helper animals" aboard orbital vessels and to increase public interest and awareness in the shuttle's mission, the astronauts onboard were invited to bring their pets aboard. These included six pug dogs owned by Lawrence Delong, a cat owned by Dan Peppergrave and a goldfish brought aboard by Roger Birdcastle. Ruth LaGatta brought aboard a large badger named Heracles who had primarily been used as a service animal. Heracles was, for the first eight years of his life, employed by a contracting company as a "dewiring badger," trained to burrow inside the walls of houses and garages and bite out all the old wiring so it could be replaced with new electrical infrastructure. LaGatta expressed some hesitation to bring the animal aboard, since it entertained an implacable compulsion to destroy all wires, but NASA successfully vetted the animal and deemed it no threat. 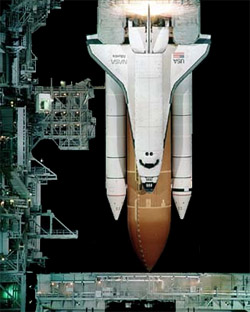 Foremost among the probable contributing factors, however, was the fact that the nose of the orbiter vehicle and the head of the rocket thruster apparatus were misaligned with the intended launch trajectory by approximately 180 degrees; in other words, the entire shuttle was, from the perspective of an outside observer, fundamentally "upside-down" on the launch pad. Consequently, when the rocket thrusters were activated, the shuttle tended toward a very rapid earthward acceleration. In layman's terms, the shuttle failed to launch into the sky, but instead was driven quite quickly into the ground; NASA believes that this miscalibration is the probable culprit in the subsequent destruction of the shuttle and its crew.

Whether the upside-down heading of the orbiter and thrusters were the result of a mechanical failure or human error cannot be determined at this time. As with any malfunction of this caliber, many factors may have combined to cause the shuttle's incorrect placement. The construction crew that built the launch platform edifice, for example, had just completed a sixteen-hour training session in a high-velocity body-flipping gyroscope, as NASA's new safety regulations mandate that all persons involved in any stage of spaceflight operations must undergo extensive vertical disorientation training. It should also be noted that the launch platform was built just miles from Florida's world famous "Mystery Hole" attraction, a place where water runs uphill, the laws of perspective cease to function and, most notably, up is said to be down.

Whether the shuttle's errant launch could have been prevented by ground control or the crew aboard is also not clear at this time. Some insight may be gleaned from recordings of pre-launch conversation between the shuttle crew and ground control. A relevant passage has been transcribed here:

GROUND CONTROL: We good to go up there?

ASTRONAUT HUG: Probably nothing. We're seeing a lot of grass and stuff.

ASTRONAUT HUG: Out the front window. The windshield thing. Lot of grass.

GROUND CONTROL: Is this uh, in your estimation, is this grass going to present a problem?

ASTRONAUT DELONG: Say, this shuttle wouldn't be, uh, upside down, would it?

GROUND CONTROL: Somebody would have noticed.

Though it is too ambiguously worded to form any concrete conclusions as to astronaut Lawrence DeLong's intended meaning, it seems possible that he may have been making an oblique reference to the possibility that the shuttle was facing downward rather than upward. Ground Control, acting on all available evidence, responded appropriately.

While it must be again reiterated that no final conclusions can be reached until a complete account of the incident can be created, NASA preliminarily finds that nobody is at fault, nothing could have been done differently and that space exploration, due to its dangerous and highly experimental nature, will inevitably result in occasional loss of life.