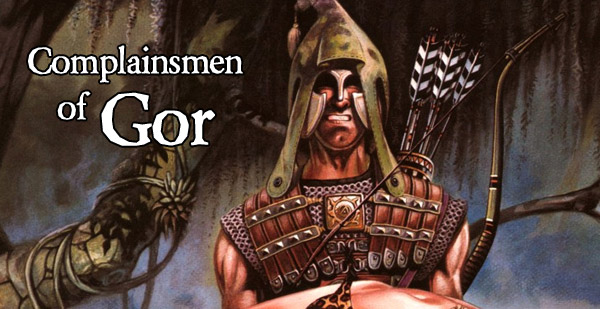 When a free man of Gor collars a woman of earth and demands her submission he is considered cruel. But when a woman takes an earth man and turns him into a slave, though unnatural in all ways and forbidden in the city of Ar, this is celebrated on website Jezebel. Hypocrisy much?

Free men of Gor upon returning from long wars discover wife has made a child with another free man and throw her from the tower where she is kept. Why does other man not pay for new wife? Am I right, guys?

Tarnsman "not notable" keeps getting combined back into the main Gorean wikipedia article even though list of female novelists gets its own page? Are we even trying to be fair anymore?

We are sick of kajirae not responding to hand gestures correctly. I made the upside down three-fingered gesture to undress and rub oil on body and kajira instead puts on DVD SHE wants to watch. Do the Slave Houses not breed kajirae properly anymore? I don't even know where to begin.

Must the purchaser pay for kneeling lessons from the whip masters or shouldn't the owner of the slave pens of the kajira pay at least half. UNFAIR.

Social justice Tumblr suggests sex slaves should not be kept hooded like falcons. Real funny GIF from Muse video. Now where is GIF for free man of Gor with bluest balls needing to be seized like desert mouse?

When kajirae are commanded to assume the position upon the floor on their bellies, face down, arms at side, palms up, sometimes they place their palms down. Punishment at worst will be caning. If a free man of Gor fails to obey the command of a higher caste he will be exiled into the Deathlands. Just looking for some equality on this one. 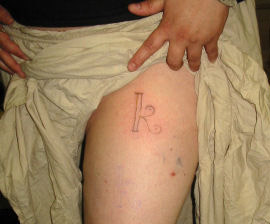 It is considered good for a woman to obey a free man and honorable to become a kajirae, but if a man becomes a kajiri for a woman's pleasure he is lower than a eunuch dog. Yeah, that's fair. Not.

Free women are permitted passage on the deck of oar ships now instead of in the ritual pleasure cabin. Any wonder why boats are being attacked by slave pirates more and more? Think about it.

Enslaved men of earth are forced to fight to the death in pits and all an enslaved woman must do is give up her name and identity and swear an oath of lifelong pleasure service to her master until she is sold or traded to a new master. Calling bullshit on this.

When I go shopping at outlet mall I get weird looks for having obese kajira collared and crawling next to me, but if free woman did it people would say, "Oh, sure, it must be thing free women do now wherever they want. It is permitted. For free women." John Norman did not have to put up with this shit.

Have you ever seen the depiction of free man of Gor on sitcom? I rest my case.

Gorean Men's Rights Activism is about getting things right and having equality. It's not hate. It's just countering rampant misandry.