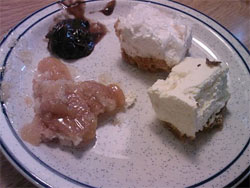 Clockwise from top left: grasshopper spit, graham cracker and menudo loaf, salted butter, and peach "cobbler." In the unlikely event you are dining at a buffet and want to eat some vegetables you can look forward to green beans stewing in mop water, 27 types of potatoes that could qualify as medical waste, and something that looked like it was excreted, begging the Hicksian follow-up, "Yeah...but excreted from what?"

And if you think you're safe by sticking to salad, I'll let Lowtax clear things up with a Lowtax Exclusive Moment(TM) from a recent conversation:

Lowtax: I went to the Golden Corral last Saturday and there was a beetle in my salad.

Save room for dessert! Buffets offer a selection of various cobblers that will remind you what it would be like to eat chewed pie out of someone else's mouth. If a cool treat is more your style why not have an ice cream from the sundae bar? These allow children and adults alike to show their creativity as they build a sundae that hastens the inevitable onset of their diabetes. Be careful, those chocolate covered peanuts might be moving.

Lowtax informs me that Golden Corral also features a cotton candy maker. I'm sure it really gives Golden Corral that giddy carnival atmosphere that can only be matched by a nursing home Hokey Pokey.

Another joy of my experience was sharing the buffet with the other customers. There were many screaming kids chasing each other unattended throughout the restaurant. The adults were mostly lumpy hillocks of men and women who have uniformly given up on dressing their age and have regressed to wearing sweatpants and strange t-shirts and winter coats that might have been pried off a frozen hobo with a screwdriver. 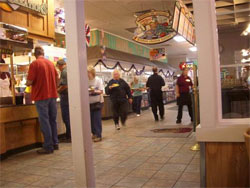 Food Management, which owns Golden Corral, also owns the nation's largest supplier of foods to private prisons. By the way, America has private prisons.One patron in particular, a woman with a gray Phil Spector frizzy fro and a body shape best described as "ball," played an over-sized part in my dining experience. With spring coming she was apparently shedding and her curly winter locks, like giant pubes, were getting around the sneeze guard and finding their way into things I mistakenly scooped onto my plate.

What more can I say about the delights to be found at Old Country Buffet? I could heap more praise on the desultory wait staff who sat at a table in a darkened corner of the restaurant and texted. I could describe the brassy blurting and swamp aromas to be found during an excursion to the bathrooms. I could relate the tale of the child - a stranger's child - who bit me and may have given me rabies. Or I could allow you to envision a fecal bedlam stocked with half-spoiled cottage cheese and room-temperature chicken. There is no smorgasbord; this is a buffet in America.

I would rather lick toilets at a Cracker Barrel for sustenance. I would rather ask the enormous Indian woman who works at my local Burger King to chew up a Whopper and baby bird me through the drive-through window. There is literally no food experience worse than a buffet. Have you seen Empire of the Sun? There's a part where a young Christian Bale is trapped in a Japanese prison camp and he's given a bowl of bug-infested rice. He separates the bugs and then eats them for the protein and that is better than a buffet.

The next time someone suggests Old Country Buffet I will drive us to Hal's Pets and we will stand around the cricket tank and catch our lunch in aquarium nets.