Sometimes worms just want to have fun and don't like listening to their owners. 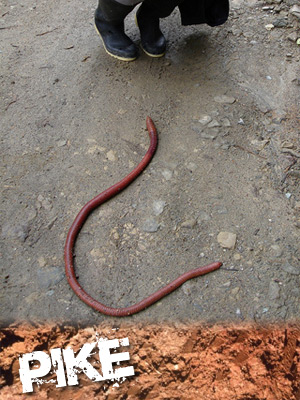 This fine fellow is a Megascolides australis named Pike. As you might have guessed from the name the Giant Gippsland earthworm is an Australian species. It's also the noisiest breed of earthworm so you are going to want a big yard and some very tolerant neighbors. Don't worry, Pike's gurgling bark is much worse than his bite, unless you're the gray and red clay soils he likes to munch on. Pike is really a gentle giant, but his owners Max and Luanne Bronson are concerned. Pike has escaped their yard three times recently, including once during the night, forcing Max to run all over the neighborhood with a flashlight and can of treats.

"I was pissed," admitted Max. "I could barely sleep knowing every night he was trying to escape. And augh that racket. Terrible."

Yard training your worm - especially a big fella like Pike - can be a handful. All breeds of worms are curious and like to test boundaries. Pet stores sell collars that shock your worm if he burrows under a fence, but in my book these collars are torture devices. Your worm shouldn't be afraid, he should be respectful.

When you first let your worm out into the yard take him over to the fence and show it to him. Stand and watch. He'll be curious and eventually try to burrow under. Clap your hands together once and loudly say, "No." Repeat this several times. If he doesn't listen right away you should firmly pull your worm back under the fence (be very careful to use the pull grip we talked about last week) and then reward him with a pat so he know being on the good side is where he belongs. Most of all, make sure your worm is stimulated in your yard. Leave lots of toys and wide open spaces, do not place bird feeders or any other bird attracting items in your yard.

Pike was a fast learner for me. After just three attempts he stopped trying to burrow under the fence. Now Max and Luanne can enjoy their worm with the peace of mind they have been lacking. 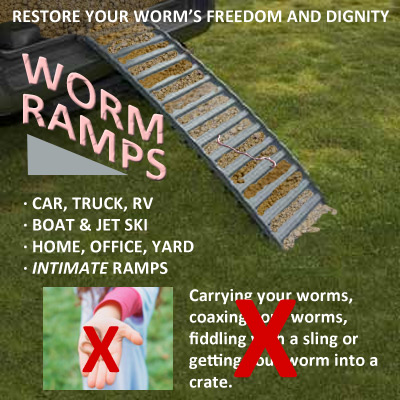