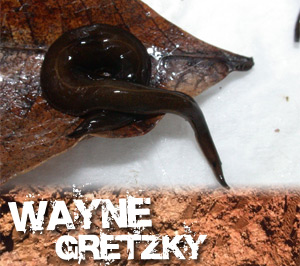 Wayne Gretzky is a retired working worm. He's a Platydemus manokwari or the New Guinea Worm, although Wayne here is from Hawaii. He was a member of the snail taskforce on Oahu and was trained and released to hunt down and exterminate invasive species of snails and slugs. After a long career of slinking through the fallen lives using his sense of smell to track snail excretions, Wayne is ready for the easy life. Debbie Kelekolio from the Oahu Working Worm Adoption Center - one of only two non-kill worm shelters in Hawaii - finds good, caring homes for worms like Wayne. In 2009 alone she placed over 6,000 worms with loving families. The job isn't always so easy.

"Predatory and parasitic worms get overlooked," Debbie explained to me. "They're not as cute as the compost worms and they can't do tricks like the helper worms. People are afraid of their reputation. Folks worry about being bitten by the hunters or infected from handling the parasites, which is a myth. Our worms are all non-human parasites. Lots of nematodes that have been retired from eating mosquito or locusts. There are a lot of misconceptions about these worms. These are goodhearted worms that just need a home."

Wayne is lucky: Debbie plans to take him home, but she has a concern.

"Wayne and I get along so well. He is climbing up the sides of his enclosure from the minute I walk in the door and he just has to be picked up. I want to give him a good home, but I have several slugs and snails he would have to live with. Can I make this work?"

The answer is a resounding, "Yes!" Predatory worms hunt using finely-tuned chemical-sensing organs in their anterior. To acclimate a trained worm like Wayne to a household full of his prey animals you will need to do two important things: carefully watch Wayne when he is out and about and bathe your snails and slugs every day. They won't mind a quick dip in the sink and the water will wash away the proteins in their excretions that Wayne uses to identify and stalk them. Another easy step you can take is to keep your snails and slugs to their perches. Don't let them play in their tunnels or on the floor. Wayne will always strike from equal or higher ground, so if you keep him in his leaf pile on the floor he should never run into your other pets.

But most of all, make sure Wayne is taken care of. Feed him, show him plenty of attention, and he won't feel the need to go looking for prey. For Debbie and Wayne this can be the start of something beautiful.