We here at Something Awful Dot Com Incorporated take the issue of mutual respect and appropriate behavior in the work environment very seriously. You are required by FNS standards to complete this certification by July 14th in order to comply with human resources directives. This website promotes equal opportunity in a harassment-free environment. Before taking this test, make sure you go over the source material so you will know how to conduct yourself and what to do if you find yourself a victim of harassment. Failure to comply with this policy will result in disciplinary action, preferably by a spanking to the buttocks. You would like that wouldn't you, you dirty, dirty whore. Good luck. 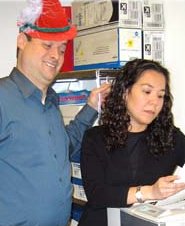 #1: Ronald is chatting it up with a new female employee named Ping Pan Pot in the break room. Ronald notices that she is Asian so he does an impression of the atomic bomb blast in Nagasaki by ramming her with his large stomach. Ping is not pleased. What did Ronald do wrong here?

A) Didn't remember to replace the coffee filter in the machine.
B) Was rude and inconsiderate of Ping Pan Pot's nationality.
C) Failed to make a bomb noise when recreating the atomic blast.
D) All of the above.

The answer is B. Ronald did not act in a manner that is proper in a work environment. All atomic blast recreations done with large bellies should only be done to blacks or Indians, who have never felt the deep scars of an atomic blast on their land, and as such won't be offended.

#2: In the midst of Ronald thrusting his gut into Ping, she holds her hand up in defense, yet in the process touches Ronald's nipple. Ronald is confused and upset over this overt sexual gesture. What should he do?

A) Go directly to his HR supervisor and report the incident.
B) Go into Ping's office and touch her nipple, to show her how it feels.
C) Write an email to his state representative and complain about road construction.
D) Cry in the shower.

The answer is A. This kind of behavior is unacceptable, even during those steamy 3:00 meetings. The HR supervisor will have a one-on-one talk with Ping and, depending on the amount of money she has on her person, will be reprimanded with a verbal notice or shipped back to the old country in a rice boat. 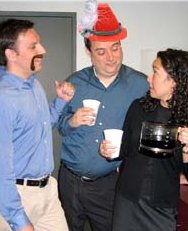 #3: Back in the break room, Ronald introduces Ping Pan Pot to Larry, who works in finance. Larry asks Ping if she wants to go out to the parking lot to see his new hotrod automobile. Ping refuses, saying "So solly, Charlie." Larry, angered at being turned down and called "Charlie", spikes her coffee with his semen. Ronald laughs when she takes a sip and spits it out in disgust. What is wrong with this scene?

A) Employees should not be in the parking lot during business hours.
B) Larry forgot to put sugar or sweetener in the semen laden coffee.
C) Ronald's top button is undone, and his chest is clearly visible.
D) All of the above.

The answer is D. What a bunch of goofballs. 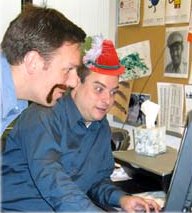 #4: Ronald likes to browse joke websites full of crude riddles and hardcore pornography. He calls Larry into his cubicle to show him a picture of a man bending over and stretching his anus to unbelievable proportions. "Oh my god what is that man doing to his anus?" cries Larry. Larry knows that they shouldn't be looking at such pictures at work, but how can he tell this to Ronald?

The answer is C. Always rat out your co-workers to the HR department. There is nothing to be ashamed of when you are concerned with your own job, and need to sell out others to gain the trust of your superiors -- even if you are a sniveling little wretch who has no friends and would stab your own mother in the back for a promotion. There is no "us" in the word "team". 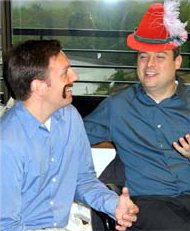 #5 Ronald and Larry sit in the employee lounge area discussing important business implementation paradigms so they can touch base and stay on the same page. Then Ronald starts telling a story about how he became intoxicated in Mexico and milked a goat for 100 pesos on a dare. Ping Pan Pot is walking by and is offended by the story. Then Ronald and Larry knock her down and rape her while shouting racial slurs. What should've been done differently?

A) Ping shouldn't have worn such a skanky business suit that tempted the men into such an embarrassing situation.
B) Ronald should've known better than to talk about milking goats around the 3rd world melting pot that is the technical department.
C) Larry forgot to wear a condom.
D) All of the above.

The answer is D. In this case, all three of these employees would face harsh disciplinary action or possible termination. 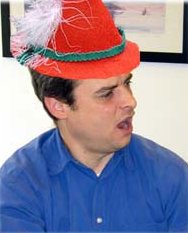 #6 Ronald tends to fall asleep at his desk with his eyes open and his mouth agape. Flies will often land in his mouth to lay their larvae, causing a cascade of maggots to fall out whenever he talks or smiles. This disturbs and frightens his co-workers, who report the strange behavior to their HR department. What would you do if you were the HR representative?

The answer is D, none of the above. Given the situation, the proper course of action for the HR representative in this case would be to put flypaper inside Ronald's mouth.

A) Aryan features.
B) Lottery.
C) Based solely on skill, dedication, and the best person for the job.
D) Hire a Jew.

The answer is D, you should hire a Jew.

#9 Ping Pan Pot has had it with the sexual harassment and racial comments made by her fellow worker, Ronald. She meets with her HR representative, Dan, who sits her down to talk about the problem. Dan explains that Ronald is a good worker and they can't afford to fire him, so instead they will construct a rocket and shoot Ping Pan Pot to the moon where she can cook, clean, and raise babies in a low gravity environment. Dan then presses an oversized red button, sending Ping down an oiled chute leading to the corporate crocodile pit, where all the men gather around to hoot and holler at the highly erotic spectacle of wet female temps struggling with crocodiles. Dan watches the scene from his tower, laughing and smoking a cigar. Did Dan do the correct thing as an HR representative?

A) No, there is no smoking allowed in the building, aside from the designated smoking areas.
B) Yes, Ping Pan Pot was batting her eyelashes at Dan, and years of experience told him that this was a sign of a flirt. She could just be blinking, but Dan didn't want to take any chances.
C) All of the above.
D) One of the above.

The answer is D. If you chose one of these answers then you are correct. 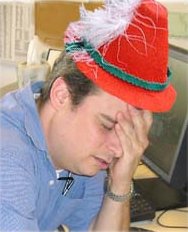 #10 Ronald's dark past has finally caught up to him. His time was running out in the department. He was personally responsible for one million dollars in harassment settlements in the last quarter alone, and it all came crashing down on his head after he made a pass at the boss's dog. They could no longer ignore the UN-enacted human rights sanctions on their company due to Ronald's actions, and they had to let him go. What could've Ronald done differently?

A) Wear a new disguise every week so victims couldn't point him out in a picture of an employee outing.
B) Respect all his fellow co-workers and treat them as equals.
C) Send Dan a box of cigars for all the trouble.
D) Eat a whole package of Nutter Butters and throw up in the copy room.

The answer is B. You should ALWAYS treat your co-workers as equals and with the utmost respect. Unless of course they are one of the lesser mongrel races that are only good for breeding in the hay like dogs. Like the Swedes.

Congratulations! If you got at least 3 of the 10 questions correct, you are now certified for harassment awareness. Print up this certificate and turn it in for a free small ice cream cone at your local Baskin Robbins. Good job.

Frankly, Mr. Shankly, this position I've held
It pays my way, and it corrodes my soul
I want to leave, you will not miss me
I want to go down in musical history