Paramount Pictures has decided to grab up one of the hottest intellectual properties out there and turn it into a big-budget science fiction action movie. I am of course referring to Peter Chung's failed MTV cartoon "Aeon Flux" in which Monican agent Aeon Flux is in a love/hate battle of the wits with Breen president/scientist/creepy guy Trevor Goodchild. I was a huge fan of the show, mostly because I was constantly high on acid during the entire two year run, so I wanted to find out what I could about the movie before it came out. I had mixed feelings about Charlize Theron playing the titular character since she doesn't look like an inmate at Dachau. Not even a "Monster" quality makeover could shave 100 pounds off of her, but she has proven her acting chops and I'm sure she can lend the role some degree of nuance. I'm talking about the sort of nuance I have come to expect from the deep character studies of Peter Chung. 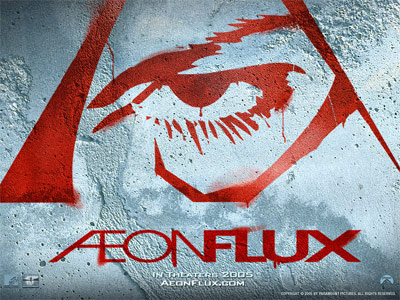 A few days ago I received an email from an anonymous source. It proclaimed that the script for the Aeon Flux movie had been leaked onto the Internet. Better still, the email message had a text file attached and it was none other than the leaked script. I will not repost the entire thing out of fear of legal retribution from Paramount, but I think our loyal readers deserve a few excerpts.

First up, here is a scene near the beginning in which Aeon Flux watches Trevor Goodchild through the window of his science lab.

AEON FLUX climbs out of a huge futuristic sewer drain and does a bunch of flips and bounces off of pipes to get to the top of a big golden water pump shaped like a bug. She crouches down and licks her lips for several seconds. AEON FLUX opens a zipper on a futuristic purse and LITTLE METAL BALLS fall out. The LITTLE METAL BALLS grow wings and start flying around and we see that they have CAMERA LENSES built into them. AEON FLUX then reaches into her eye socket and pulls out her eyeball. She moans with pleasure as she is doing this. She places her eyeball in a bottle full of bubbling green liquid and then puts a metal ball in her eye socket. 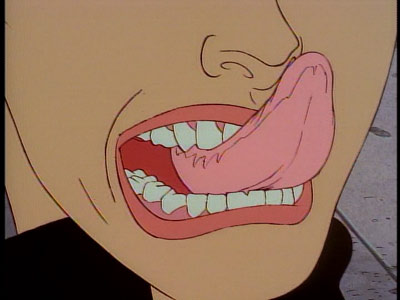 CUT TO view through the floating camera balls.

CUT TO metal ball hovering up to the window of a laboratory.

The Science lab is circular and consists of 16 cell doors and a central hallway. TREVOR GOODCHILD is standing on grass next to a fountain of a mermaid and he is wearing a surgical apron and is talking to two GUARDS. Robotic babies with cat heads are flying around laughing in the background. 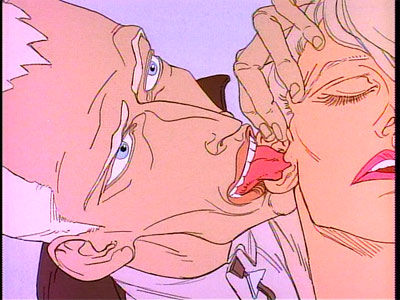 TREVOR GOODCHILD
Turn off the security monitoring for cell 8 and then you may go.

TREVOR walks over to a cell door labeled "number eight." We see an extreme closeup as he slowly peels off the fingernail of his index finger and reveals a tiny silver disc. He licks the disc out of the wound and with it balanced on the tip of his tongue he inserts it into a small mechanism on the door to the cell. With a WHOOSH of futuristic door technology the door slides open. A skinny and sickly looking woman sits up in bed. 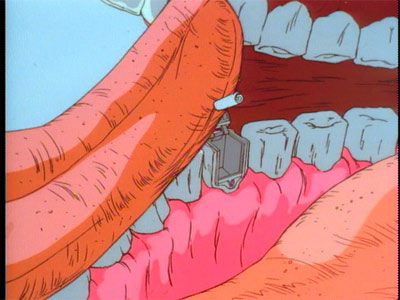 TREVOR GOODCHILD
Wake up my cupcake, I am here to feed the children.

TREVOR embraces the woman and starts licking her neck. With his free hand he uses a robotic speculum to open a wound on the woman's chest. The woman starts moaning and TREVOR licks all the way down her body to the wound and then he presses his eye up to the wound. Inside are millions of giant cell-like creatures and they are VIBRATING STRANGELY and making a chattering sound.TREVOR GOODCHILD
Hello, little lovelies. Father has brought treats.

TREVOR bites into a false tooth and pink goo streams down his tongue and into the wound. The vibrating cell creatures start feasting on the goo and chattering happily. The woman moans some more. 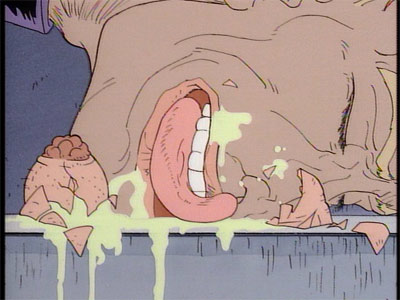 AEON FLUX coos with pleasure as she thrusts her real eyeball back into her eye socket. She blinks.

AEON FLUX
He just doesn't get it.

Wow! Intense! With Aeon hot on the trail of Trevor's clever plan he swings into action and releases a giant golden bird with the face of an eight-eyed woman called the Phreenix to kill Aeon Flux. Aeon manages to kill the Phreenix by crushing its head with her thighs and then Trevor floats down on a disc to chastise Aeon for her unwillingness to be killed.

AEON FLUX presses against a wall, slightly out of breath from defeating the PHREENIX. She looks at the feather she plucked from its head and we see it shimmering hypnotically. AEON FLUX tucks the feather in her hair and turns to continue down the alley. TREVOR GOODCHILD appears above the alley and floats down in front of her on a futuristic platform that can fly. 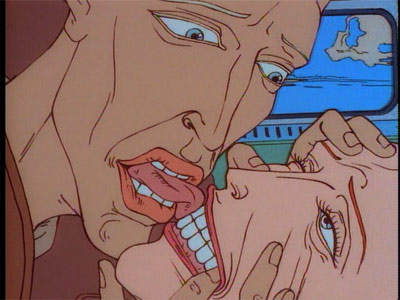 AEON shoots her pistol at him but it hits a force field that turns it into a tiny dragon that flies harmlessly away.TREVOR GOODCHILD
Aeon, Aeon, Aeon, when are you going to do me the favor of retiring?

AEON FLUX
I don't like what you're up to.

TREVOR GOODCHILD
Neither do I. I am up to no good. The inverse of good. You might say 'evil.' But evil is so subjective. Join me Aeon, you're too good for this.

AEON FLUX
I'm too good for you.

TREVOR GOODCHILD
(suddenly angry) THIS IS NOT HOW IT'S SUPPOSED TO GO, AEON! Do or die! DO OR DIE! You do for me or you die for me.

AEON throws a DISC BOMB at the wall next to TREVOR and it explodes creating a huge fireball and big cloud of dust. TREVOR flies up out of the dust and looks for AEON but she has disappeared.

Finally, this climactic third scene takes place near the end of the movie. I think it's pretty self-explanatory.

Thick red blood rushes rhythmically and the walls of the vein pulsate to the drumbeat of the monkey's heart. TREVOR GOODCHILD holds the ANIMATUS CORPUS and is preparing to use it to IMPREGNATE the SHIVERING MANY. TREVOR is wearing a bulky diving suit with transparent circles so you can see his nipples and an oversized glass helmet. He attaches the ANIMATUS CORPUS to his COD PIECE just as AEON FLUX arrives. She is wearing her usual costume plus a simple mouth-piece breathing device so that she can survive in the blood. 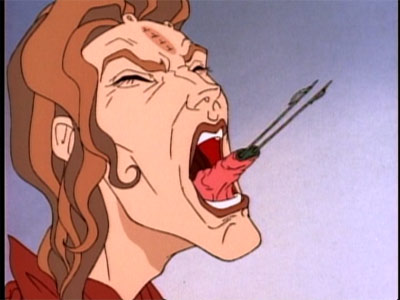 AEON FLUX
Your time is up, Trevor

TREVOR GOODCHILD
No! Aeon, you are just in time. Witness the birth of a new epoch!

TREVOR continues to moan and thrust into the SHIVERING MANY. The ANIMATUS CORPUS begins to glow from inside the shifting and chattering mass of cells. AEON FLUX starts vibrating and suddenly goes blurry and there are FOUR AEON FLUXES. We see that through her vision now the SHIVERING MANY looks like a small crying child. TREVOR is just a shadow shape dimly seen. 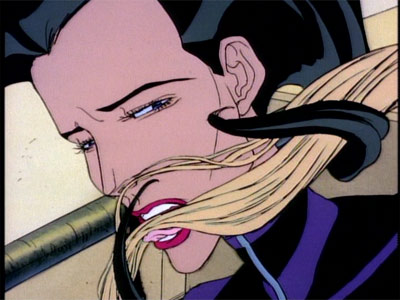 AEON FLUX
It's okay, I won't hurt you.

SHIVERING MANY
The scary father is hurting me.

AEON FLUX
No! I brought you something.

AEON FLUX holds a PINK ORCHID out to the little girl. The girl tentatively takes it and there is a FLASH OF WHITE and then the girl morphs into AEON FLUX! 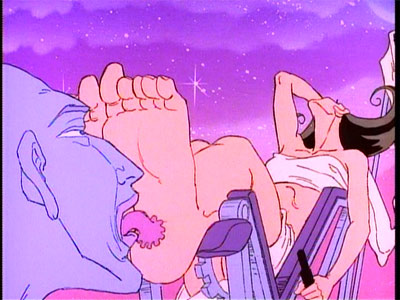 AEON FLUX
I knew it!

SHIVERING MANY
I know you.

Wow, I just have to stop there because otherwise I will give away too much of the plot. Needless to say you can look forward to an extremely faithful interpretation of the TV show by the folks working on the movie. If you want to know more about it you can check out the film's website or you can just close your eyes and then mainline a triple dose of PCP. You'll know you're watching the Aeon Flux trailer when you start licking things like your family's feet or broken glass.