Blue Stripe - The Life and Times of a Harkonnen Florist

Wherein My Efforts Come to a Head 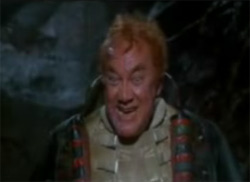 No, he's not flaying flesh from a slave. He's just in a good mood!Battle rages around me. Harkonnen troops and the Emperor's Sardaukar are streaming through the ruptured walls of the palace at Arrakeen. Explosions boil up into the night sky and tracer bolts zip back and forth and through the air. It's very melodramatic and seems to be amusing the Baron, who is watching as I am from the balcony of one of his troop ships.

"It is the end of House Atreides!" The Baron rejoices, spinning in the air.

"Do not celebrate prematurely, my Baron," Piter cautions. "Thufir Hawat may have tricks for us yet."

I am sure he has tricks like 10 legions of Sardaukar hiding in a cave under Arrakeen. All these Sardaukar terror troops the Baron brought with us hardly seem like a fair match for the mortal men of House Atreides. The Emperor's elite killers are blasting through the Atreides troops like they are made of straw. Blood-filled and screaming straw.

"You are certain the Wierding Modules were sabotaged?" Sweat shines on the Baron's purplish face.

"Our agent knows the reward for his betrayal of Duke Leto," Piter answers, prompting a fit of noxious laughter from the Baron.

It doesn't take a Mentat to calculate what kind of reward good old Piter has in mind for their turncoat within House Atreides. My brain runs through a few specific versions of Harkonnen rewards for loyalty; a poisoned dart through the eye, an envenomed knife in the back, a toxic axe through the face, something unspeakable involving a groin and acid. Actually, I'm not too sure about the poison dart. It might have been a toxoid pellet fired through the brain or strangulation with a poisoned length of shigawire. Piter always was particularly fond of strangulations.

Captain Nefud offers me a pair of oil lens binoculars, but I decline. I don't need to see that sort of thing up-close. It's probably upsettingly violent. 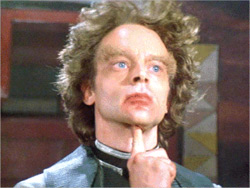 Piter De Vries: slightly less cruel, much more likely to kill you. Much later, the Sardaukar have completed their rout of the Atreides forces and the Harkonnen troops have moved in to begin mopping up. I can still hear shots echoing through the palace. There are signs of battle damage everywhere, but the grand hall and several of the adjoining chambers have been swept for sabotage devices. The Baron and Piter are off gloating over their prisoners, leaving myself and Rhayt to begin offloading the flowers from the Guild ships.

With a little assistance from Captain Nefud, I am able to convince several platoons of Harkonnen troops and their armored vehicles to convoy the flowers to the palace. The troops are swaggering and surly in the aftermath of their victory and they badly mishandle several casks of pre-moisturized potting soil. Ask a soldier to do a florists job and you end up with the violent defeat of the flowers.

We begin setting up the flowers for the victory celebration in the angled box I have developed specifically for the occasion. It will provide a view of my beautiful arrangement from almost any angle. The troops leave Rhayt and myself to unpack the many crates, bundles, and boxes full of flowers and soil and moisture adhesion pellets. I have sunk my life's fortune into this arrangement. I can only hope that fortune has been spent wisely enough to preserve the life part.

During the many hours it takes us to complete the arrangement I get word that Piter has been slain by treachery. I have no personal sadness over the death of the Baron's evil Mentat, but it does mean that adjustments will have to be made for our floral arrangement.

"Piter is out," I hiss to Rhayt as we are layering in more Lankiveil brightmoss. "Bring me the Tleilaxu flesh violets, we'll turn him into Nafud."

"The eyebrows are already done," Rhayt gripes to me.

"Well, undo them!" I hiss and begin plucking up handfuls of the floral Piter's gray eyebrows.