Interview With a Dragonmaster

All Hail the Dragonmaster 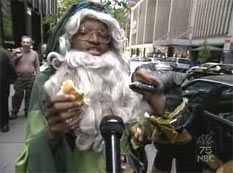 The Dragonmaster enjoys the enchanting flavor of a fish filet from Burger King.Recently on Late Night with Conan O'Brien, Conan sent Triumph the insult comic dog to an opening showing of Attack of the Clones. While he was there he harassed the goofy bastards dressed up as R2D2 and Spock and whatnot and also a young black man dressed up as a wizard who introduced himself as Blackwolf the Dragonmaster; unofficial mage of New York. Blackwolf was hilarious, insane, and most importantly, hilariously insane.

One of our enterprising forum goers by the name of cgibin, with the help of his good friend, tracked down Blackwolf's nutty web site. The site is on Geocities, so linking it would just bring it down in about a nanosecond, but it is overflowing with interesting reading about being a mage. Take for example this essay in which he explains why the presence of mages at Renaissance Fairs is vital to the survival of mankind. 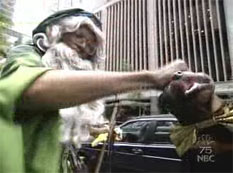 Fed up with the "fresh hound" Blackwolf unleashes a flury of blows on the unsuspecting dog.I believe that, whenever a Court Wizard is in attendance at any of this nation's Renaissance Faires, he/she is representing the very embodiment of the mission given to Morphos by Merlin. To me, the Mages at Faire are the last true dispensers (and, at that, defenders!) of wisdom in our Multiverse. Keep in mind that their main objective is to exhibit, and sometimes demonstrate, proper respect for the Laws of Nature. I have read a good many books by the leading authors of so-called "science fiction" during my travels; many of these writers have stumbled upon that very theory first espoused by Merlin concerning how we Mages maintain our grip upon the constant balance between Good and Evil.

Unwilling to cease their investigation by merely reading the prose of Blackwolf, cgibin and his friend took it upon themselves to contact the Dragonmaster directly via the magic of the telephone. Posing as the wizard Heldrig Uth Matar and his squire Talif of Poughkeepsie, they called representing the Schenectady mage's guild and questioned him at length about the validity of his claims. Amazingly he never broke the Dragonmaster character and although some of their inquiries produced a stutter, the nutty bastard was admirably consistent.

I give you now for you enjoyment: Interview with a Dragonmaster.

It is a fairly large mp3 download, but is well worth the time it takes clogging your bandwidth.

This may not actually be news to many of you, but Cliff Yablonski finds your ugly faces to be the bane of his existence and wishes to destroy you utterly. With this in mind he has once again updated his delightful pages of mirth and charitable good humor. 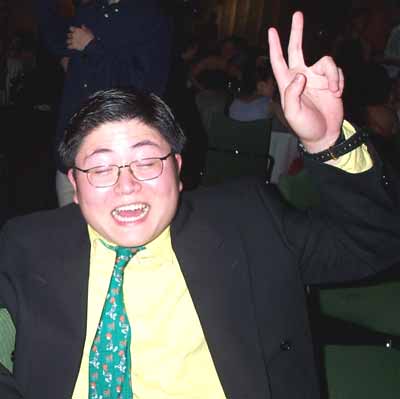 "Two, that is correct, I am aiming for eating 200 pounds of turkey on this evening occasion, help me!"

Better go read it before he catches wind of your contrary manner!

I am utterly shocked to report that Mexican wrestling sensation and all around good guy El Pinto Grande has updated his site, including three delicious new recipes! 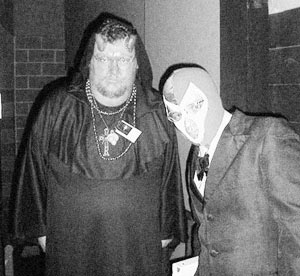 German Butler is not having a reputation for a fairest of fights and bring Doctor Fights himself who is like King Rudos of Rudolandia and this is impossible to be believing. I have a quick words in the locker rooms with Big Fat Evil and his partner in ring and off ring at Dungeon of Dragons store named Eternal Helper. Big Fat Evil is annoying American who is always smelling like hotdogs and chorizo but Eternal Helper is snappy dresser who is maybe sometimes girlish but okay in my book.

While he may not have the skills to pay the bills, he certainly has a lot of heart and luchador spirit, so take a look at his computer book.