In recent very exciting weeks we've seen the pseudo-launch of Gmail, Google's answer to e-mail. I'm certainly no expert on the subject, since I secretly don't care about the subject at all, but as near as I can tell, Gmail is an advanced benevolent God-machine programmed to bring salvation to the wicked land of e-mail. Right now Gmail is in some sort of new-fangled beta stage, and new accounts are being offered by way of an invitation system designed to make nerds get overly excited. This means that people have been working themselves up by selling, trading, giving away, and pleading for invites. As far as I can tell, Gmail invites are some kind of nerd currency currently comparable only to the comical money used in Canada, which features pictures of ducks, hockey players, and a grizzly bear playing a banjo. You ain't not nobody if you don't got Gmail, as they say in the partially-literate area the rest of the world calls "America."

As a member of the last few years, I've seen the whole notion of e-mail devalued to the point where you'd have to do some pretty impressive magic to make another e-mail address appealing to me. If maybe the e-mail was hosted in a server located inside the Pope's hat, for example, I might get excited about it. I can generate a virtually unlimited number of new accounts, and while it would be awesome to have 50 different e-mails, it would also be tedious. The three I have now are more than enough to keep me occupied, especially since so many concerned SA readers somehow became aware of how small my penis is and started a massive grassroots e-mail campaign to make me aware of medications I could be taking to both enlarge my penis and deal with the depression that having a small penis causes. Even after reading the feature list, Gmail still sounds like any other e-mail address. So what's the fanaticism about? Early on people were shelling out pretty big handfuls of cash monies for Gmail invites, and the days of paying for e-mail ended roughly several years ago, shortly after the dodo killed the wooly mammoth in a rooftop shootout. To fill precious vertical space, the lack of which is the most dangerous foe to us lazy writer-types, let's take a look at what Gmail is all about. 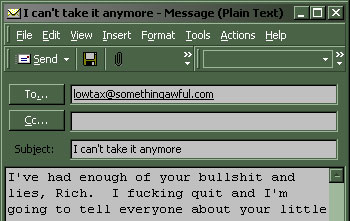 Search your e-mail just like you would the web. Find leading suppliers of e-mails from grandma. Would you like to make grandma's e-mail your startup page?

"G" comes later in the alphabet than "E," so therefore Gmail is superior to E-mail. At least until we replace the alphabet with… THE OMEGABET.

No banner advertisements or pop-ups. Instead Pepsi, the beverage of our generation, sponsors each e-mail. All e-mail you send and receive becomes the property of Pepsi.

Right now it's for elitists people only so you can be part of a small fraternity of super-nerds.

Unlike users of conventional web based e-mail, the Gmail user has a ridiculously large amount of space allowing them the luxury of never having to delete e-mail. That is until I finish my DivX rip of the hit movie "Gigli" and e-mail it to them.

Google, like a detective with amnesia, has had a curious existence. It's just a search engine, yet, strangely, there are people who look at it as the greatest thing to ever knock the Internet up. As someone who does not get excited about websites or search engines, I never saw Google as anything more than a decent way of occasionally searching for my own name out of basic egomaniacal need. To countless nerd-like creatures, Google has become a sort of sacred cow that can do no wrong. I've seen many a forum thread of unadulterated praise for Google and talk of how it's the single most monumental creation since the invention of the TI-82 calculator, which completely blew away the TI-81. I suppose Google is probably a lot more appealing and personable a company than Microsoft or one of those other corporate titans built on the blood of dead virgins, but I fail to see why I should look at them as anything more than a search engine.

I guess I'm also confused as to why people keep talking about e-mail, particularly Gmail, all of a sudden. After being boring old news for about a decade, all it takes is the promise of a ton of space to make people fall in love with e-mail again? Were we running out of space for our e-mail to begin with? Are there that many joke of the day forwards in existence? I think not. I do have to credit Google on some good promotion, though. This invitation thing has whipped a lot of people into an utterly inexplicable fervor. I still plan to go ahead with abducting and murdering the next person to either offer me a Gmail invite or ask for one, but I won't fault Google for that. Well, if I get caught I will, but there is no way anyone will catch me.

My main annoyance with Gmail is that I was really hoping for e-mail to die out, like Gandhi or the saber tooth tiger, or, better yet, Gandhi riding on the back of a saber tooth tiger as it battles a heavily armed dodo mounted on the back of a wooly mammoth. But no, nothing ever works out for me. Everything seemed to be going good in my life, but then I heard the news that Google had thwarted my diabolical plans and I very nearly escaped asphyxiating on my Charleston Chew. If only I hadn't invested so much money in consumer video teleconferencing companies. I thought we'd all be using that by now!

P.S. Be sure to send hatemail for this awful update to my new e-mail address, spokkerjones@somethingawful.com.

Your Band Sucks: The Return of the Cure!

Heads up, gothy! There's a new confirmed-as-awful Cure single coming your way, and a new destined-to-be-awful Cure album following soon after. This week, Dr. David Thorpe resists the temptation to buy into comeback fever while revisiting his shameful gothic past. 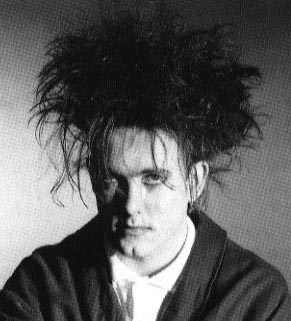 "Well you know what, Robert Smith? You’re not getting my cash, you money-grubbing, wooly gothic bastard. You can’t release three crap albums in a row and then expect everyone to come running back whenever your accountant/muse dangles a solid-gold carrot in front of your fat, pallid face."

What could Dr. Thorpe possibly have against a poor harmless old clown like Robert Smith? It's time to find out.