What you probably don't know Ice T from is his Dungeons and Dragons audiobook narration. The news that he was recording a D&D audiobook hit the Internet a few months ago when Ice T mentioned on his podcast that he was baffled by the silly names. It turns out that Ice T recorded R.A. Salvatore's short story "Comrades at Odds" which is a Drizzt Do'urden adventure and is temporarily available for free to Audible members. 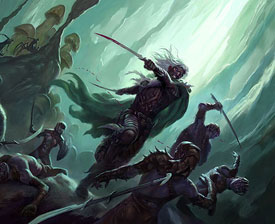 Not much happens in the story since it's mortar between the bricks of novels about the same characters. It focuses on two groups. One group, Drizzt and his moon elf friend Innovindil, fly around on pegasi, scout some orcs, recover the body of a fallen friend, and debate whether or not orcs are all evil. The other group, Tos'un Armgo and the talking sword Khazid'hea, kill a bunch of orcs and are briefly befriended by a group of elves before fleeing into the winter.

It's your usual fantasy claptrap and if you're not excited by the idea of hearing Ice T read it then I don't even know why you bother waking up. Other than constantly pronouncing "human" as "yooman," and occasionally deciding to pronounce the sword's stupid name differently, Ice T pulls off the fantasy names and overwrought descriptions. Which doesn't make it any less amazing when you hear the guy who sang KKK Bitch doing multiple elf voices arguing about orc rights.

Right out of the gate, Ice T has to contend with a litany of fantasy names. It doesn't really let up for the first couple minutes of the audiobook, but here's a sample.

After that, the Original Gangster word paints a scene of elves swooping around on pegasi:

If you never wanted to hear Ice T as an elf woman and an elf man arguing, then you clearly are not as big of a fan of Body Count as me.

If only Ice T had a sentient sword back when he was an actual pimp, he would have dealt with hustlers like these orcs:

Drizzt treats the moon elf Innovindil's droning about elf mythology like I'm pretty sure Ice T himself wanted to treat it:

If this one slipped in, I wonder how many times they had to cut away from him laughing at the stupid shit he was reading:

This one is worth sticking around for to hear Ice T's elf cleric voice near the end.

This is proof that more rappers - really anyone with a tough guy persona - should be reading D&D books. We deserve to hear their moon elf woman voice. We also deserve more Ice T fantasy or far flung scifi audiobooks in general. Ice T reading Dune. Think about it.

You can read more from Zack on his Facebook page.