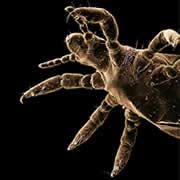 Cash Money Super StarMost people agree that capitalism is the cornerstone of our modern crazy world. The pursuit of profit is what carries us forward into new frontiers, from deep space to the atoms comprising a human fart. But is it right that the roads to these new frontiers are paved by greed? Is it right to open new doors, but only for the purpose of making money? And what's in that goddamn hatch on the island in "Lost" anyway? Is it baby chickens? It better not be baby chickens. As the walls of mystery are torn down by the pickaxes of scientific understanding, we are increasingly finding these brave new lands to be nothing more than investment opportunities for corporations. We face an uncertain future with unchecked capitalism. Greed can only carry us so far, and at some point we will have to start thinking in a more altruistic manner.

Knee-jerk defenders of capitalism are quick to label doubters as "communists," "un-American," or, God forbid, "Canadians." In all cases, they are wrong. There are more than just extremes out there. Besides, communism as it was envisioned has some noble elements, even though communism as it was executed was a true experiment in terror not unlike finding a human finger in your fast food. Actually, scratch that, it was completely unlike finding a human finger in your fast food. Unless you mean symbolically, in which case the finger as a symbol for personal wealth might end up in your fast food, which of course represents... Ah screw it!

Ultimately, though, human beings are simply not decent enough to handle the better ideas of communism at this point in time without making a mess of things. Maybe in the beautiful future full of Rubenesque robots and laser-guided abortions, but for now we are too dumb. Besides, there is too much fanaticism associated with capitalism. Rooting for an economic and social system in the same way some people root for sports teams is a bit insane, if you ask me, but I understand the reasons. People want to make money and don't want anything to stop them from making money. They also fear change, because they've been taught to associate everything else with socialism or communism, and thus supporting people that don't work as hard as them. Truth be told, there are alternatives and compromises to both capitalism and communism that can be grasped safely within our lifetime.

I think capitalism, with restrictions, is fine in the short term, but I don't think it will work forever. Too much consumption and not enough conservation are bound to dry up resources, especially if we limit ourselves to the resources of this world. There are vast untapped vespene geysers out there in space just waiting to be plundered, but our short-term thinking will never get us off this planet. Somewhere and at some point we're going to have to stop being like this and move on to better things. Maybe that's when we'll all collectively don silver jumpsuits and have space races for charity. Sort of like walkathons for cancer, but only this time we'll be raising arbitrary credits to build moon orphanages or get Crater High School a new agrocrag activity center. The truth is that the race will have just been for fun, since everything will be built by gigantic nanobots that don't need anything more than the virgin blood that fuels them.

I don't want you to get the wrong idea about me. I'm no hippy. I burn massive amounts of Styrofoam in my backyard for sport, throw bags of cans out of my car window at school children, and I often tip the homeless with my fists. But even I can say that this sort of living is eventually going to come back to haunt me the form of a violent intervention or a wayward meteorite to the face. What I'm saying is that, sooner or later, we'll all have to grow up before we get to the point we're paying for oxygen or the right to exist.

There is a solution that can be integrated relatively soon. What I'm proposing is that we simply replace money with parasites. Yes, parasites. Hear me out here, because this is just crazy enough to work. They come in all shapes and sizes, some with short lives and some with long lives, and therefore work as the ideal currency in an economic system. We just have to assign values to each type of parasite, based on their scarcity, health effects, lifespan, and how communicable they are.

Pros: no more overwhelming greed, people must share the wealth or risk dying, promotes "Culture of Life" by making us hosts to a variety of living beings. Natural and ecologically sound.

Cons: none that I can think of! 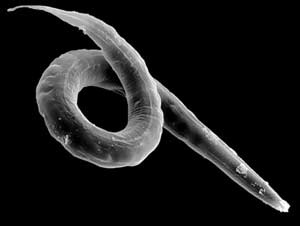 Money in the bank!There are many parallels between the life cycles of parasites and certain aspects of economics. For example, is the gestation and spawning of a botfly really that different from an individual retirement account blooming into a tidy sum of money over the years? Not at all. Your savings account may be active for a long period of time, just as the tapeworm can grow to be 15 to 20 feet inside your intestines. Let me also tell you this: your intestines are safer than any bank, because no one will ever rob them.

The way I see this system working is thus: ectoparasites will act as "cash in your wallet," while endoparasites will represent "money in the bank." Ectoparasites, such as fleas and lice, are easy to carry on your person and transmit to others in the same way a wad of cash is easy to transfer to others. Every now and then you may need to draw on more extensive cash reserves, and that's where the endoparasitic friends in your intestines come in. I'm not sure about transferring those yet, but I imagine it could get pretty messy. But then again, when you think about it, our current form of capitalism gets pretty messy too, what with hostile takeovers and bankruptcies. So really, possibly having to expose someone to your infected feces shouldn't be seen as a deterrent. Besides, in this system no one can be "too rich" without being horribly ill. No more giant monopolies or poor people. Everyone has a fair shot at getting parasites.

Imagine the more intimate financial transactions of a parasite economy. Gone are the days of simply handing someone a wad of cash, in are the days of brushing your flea-infested hair off onto another man's head. A common financial exchange might go something like this, "Hello, young whippersnapper! This root beer float will be two and a half roundworms!" At that point parasites will be exchanged, or possibly left in the root beer mug for the shopkeeper to collect and save for later.

I'm still working out some of the basics, as transferring certain parasites can be rather unhygienic. This shouldn't discredit the system, since there are most certainly safe and healthy workarounds. Even still, sometimes you just have to get dirty. There is a term for such dirty business, after all. It's called "dirty business." We just have to take a little (but not too much) time and figure this all out. But the sooner we get our bodies loaded with parasites, the sooner we can start saving for a better tomorrow.