Megan Fox and the Kingdom of the Bowling Alley Nachos 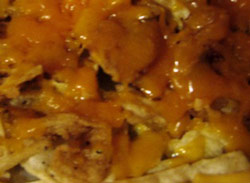 "Her version just cheese. No sauce. It is like eating football of macaroni."

Clowe had other qualities that won him over. Her "stoic behavior" and "thinking before talking" were both appreciated by Kafir. He enjoyed her "kindness to animal" and "never feel alone with her beside."

Kafir was smitten, and I was happy for him, but I couldn't help but worry that he was setting himself up for heartbreak. What Kafir prized as "stoic behavior" struck me as dispassion. Kafir had upended his previous obsession with painting Megan Fox and replaced it with the busty waitress from a bowling alley only days after meeting her. That was a lot of pressure for any girl to live up to. I hoped Clowe and her pot of bubbling glue on the stove could make him happy for a long time to come.

That didn't happen. Less than a week later I stopped by Kafir's house. I had to ring the doorbell and knock several times before he answered. He was unshaven and his eyes were sunken into his face. I asked him what happened.

His house smelled like unwashed dishes and used snot rags. There was a stack of over the counter medication on the coffee table.

To his credit, Kafir did not cry as he laid out the tragic sequence of events. He glossed over their whirlwind romance, mentioned that he had entertained thoughts of marriage and US citizenship, and then got to the tragedy part.

"Fucking pig!" he slammed a palm on the coffee table, rattling spoons in tea cups. "Fucking pig kill her! She get the hini, the swine flu."

He snapped his fingers.

"Like that she is gone my friend. Like that. One day here, the next day she go to the doctor and the doctor say your kidney go my friend. Sorry. Put you on dialysis. Sorry, no luck. Goodbye, friend. Ahhh fuck this shit planet. Shit fucking pig planet."

Kafir showed me to the room he used as his art studio and showed me that he had begun work on a painting.

A huge-breasted Valkyrie with the head of Jerry Lewis and the face of an infant rode atop a fanged pig-monster. In the background men in business suits and soldiers were visible, as well as farty green clouds. 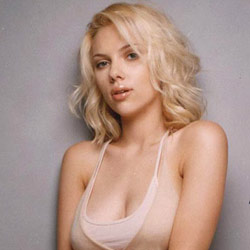 "Swine flu is worst," he pointed to the pig. "These men are Wall Street banker and soldier of Israeli occupier. Not Jew, just Israeli soldier. This cloud is toxic poison pollution."

Despite this upheaval, Kafir insisted on riding with me to this week's bowling night. He hardly seemed to notice the loss of Clowe.

"What is point, to dwell? Life is for living."

Late in the night, over a plate of nachos, Kafir leaned over to me while TECHNO was bowling his last frame.

"I tell you, I found new woman. Gorgeous beyond belief. I love her, my friend. Have you heard...her name is Scarlett Johansson?"

I told him I knew her and that I was pretty sure she was married to Ryan Reynolds. Kafir didn't know who that was so I told him that Ryan Reynolds was Van Wilder.

"Fuck this Van Wilder," Kafir dismissed him with a wave. "He come here I cut his balls off and feed them to a roach. Scarlett Johansson is my lady."